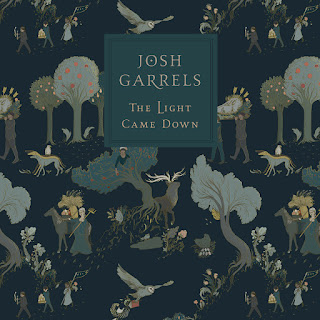 It's beginning to look (and sound) a lot like Christmas with our newest NoiseTrade One-on-One with indie-folk singer-songwriter Josh Garrels. We chatted with the adventurous sonic craftsman to get his insights on his newest album The Light Came Down, his relationship to Christmas music (both as a fan and as a songwriter), and what it's like to take his new Christmas songs (and old holiday classics) out on the road.


NoiseTrade: What can you tell us about the inspiration behind The Light Came Down and what made “now” the time to finally record a Christmas album?

Josh Garrels: I’ve wanted to record a Christmas album for years. Usually the urge is strongest right before the Christmas season, at which point it’s much too late to begin working on anything substantial. I knew the album would take forethought, and that I’d want to approach it differently than past albums. I began talking with producer Isaac Wardell of Bifrost Arts last spring about working together on something, and our correspondence slowly evolved into the decision to work on a Christmas EP, which then morphed into a 15 song full length!

Even recording the album in August of 2016, we barely got it done in time. In the end, we finished a full length album in three months, which is record breaking time for me. I never could have done it without a lot of help.

NT: What is your relationship with Christmas music and what are some your musical memories from when you were a kid?

Garrels: My dad was a music teacher and he would have music playing in the house at almost all moments. He would play different types of music during the different movements of a given day or holiday: quiet and meditative in the morning, pop music in the car, instrumental music during dinner, sometimes a family dance party to Whitney Houston and INXS. Evenings were often the time for “important” pieces of music. I have vivid memories of the lights down low, laying on the couch with my head by the hi-fi speaker and listening closely to Simon and Garfunkel, Bach, and of course, Christmas music.

The rule in my house was, “nothing Christmas until AFTER Thanksgiving,” and you have to understand, my dad LOVED Christmas. Once a year, he would pull out a huge box full CDs, tapes, and vinyl of his favorite Christmas music. He would be sure to not overplay any of it so as to retain its impact. I was impacted by this.

NT: With Christmas music covering some pretty well loved and well-worn territory, how did you approach the songwriting process for your original tracks on The Light Came Down?

Garrels: Well, I knew I wanted to stay “on focus” in regards to the songs dealing with the incarnation of Jesus; “The reason for the season,” if you will. Personally, I love some of the cultural American Christmas stuff: Rudolph, Bing Crosby, tinsel, "Rockin' around the Christmas Tree," etc., but for my album, I wanted to land pretty squarely on the sacred significance of what’s being celebrated. Yes, it is beloved territory, but truthfully, I have a relationship with the one who is my beloved, so I felt like the original songs about him came pretty naturally. I have the benefit of pulling from a living reality, and not strictly relying someone else’s perception, no matter how beautiful or on point their perception may have been.

We’re celebrating an event that happened at a particular point in history, which makes that event static. But just as the word became flesh and dwelt among us, I believe the story should continued to be “fleshed out” and take new expression in our art and lives. All that to say, I think there will always be a need for new expression of timeless ideas.

NT: When you decided to make the album a mix of originals and traditional songs, how did you decided on which holiday favorites you’d cover?

Garrels: I knew I wanted a few traditional songs that would be immediately recognizable, but I wanted to make sure they were ones that I actually liked to sing! There’s a reason "O Come O Come Emmanuel" and "Silent Night” are timeless. So the trick would be honoring the song and doing my best to capture them in a timeless manner. Again, I also wanted the songs chosen to reflect the sacred mystery of the incarnation.

NT: With you currently being out on the road for a couple weeks, how has it felt giving these songs their live debut and how have your audiences received your new songs?

Garrels: In all transparency, I didn’t know how this Christmas album would be received. My die hard audience has come to trust me and expect a certain level of artistic integrity and experimentation. Yet, I didn’t know if this album would feel like it was coming from left field. I knew my own heart was in this work, but would people follow me there or just think it was a hokey “holiday” album?

The good news is that the album has resonated with people! Some self-professed Christmas music haters even like the album! It’s been really meaningful to travel from city to city and share these songs, new and old, with rooms full of people swaying back and forth singing with me. I took for granted how many others out there really want to celebrate this season for its scared significance.

NT: Finally, what is your recommendation for an oddball, left-of-center Christmas song that you really enjoy but the majority of folks might not know about?

Garrels: Well, “The Boar’s Head” is one and that’s why I recorded it! But for other oddball Christmas songs… ”Santa Claus, Go Straight to the Ghetto” by James Brown, “That Was The Worst Christmas Ever” by Sufjan, and one of my favorites, Prokofiev’s “Troika."
Posted by Will Hodge at 11:34 AM