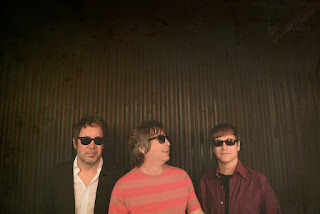 If it’s been a while since you’ve rocked out to a Fastball song, your luck’s about to change. For our latest NoiseTrade One-on-One, we talked to Fastball’s co-lead vocalist, guitarist, and songwriter, Miles Zuniga about the band’s upcoming album Step Into Light, shooting new music videos with friend/industry vet Nigel Dick (Guns N’ Roses, Britney Spears, Oasis), and the new life that’s been given to their ‘90s hit “Out of My Head” via Machine Gun Kelly’s new hit single “Bad Things.”


NoiseTrade: Two decades into your career, tell us how the writing and recording of your new album Step Into Light compares to the experience of your first few albums?
Miles Zuniga: The first few albums were recorded back in the days when record companies had big piles of money. Those records were done in Los Angeles in beautiful recording studios where people would offer you cappuccino and bring you cocaine on silver trays. Okay, I made that last part up. That never happened to Fastball. Maybe it happened to Fleetwood Mac, but it never happened to us. We did get offered cappuccino though. In contrast, we recorded Step Into Light in two weeks at The Bubble, our pal Frenchy’s studio. For reasons I’ll explain in a minute, we were under a tight deadline. The deadline meant that we had to be very efficient in the studio. I would be singing upstairs and Tony would be playing bass downstairs or vice versa. There was very little idle time. I’m quite pleased with the results. Most of the songs were written separately. A few were songs that we’ve had that for whatever reason, never made the cut. “Best Friend” and “We’re On Our Way” were written and recorded for the Keep Your Wig On record but we scrapped them. We re-recorded them for Step Into Light. We recorded “Love Comes In Waves” with Mike McCarthy a few years back.

NT: With your last album Little White Lies having been released in 2009, what was the first spark that got you guys back into the studio for Step Into Light?

Zuniga: We notoriously take a long time between records but we’re always writing songs. The spark was a tour that we were going to go on but the tour fell through. We made the record for that tour.

NT: Fastball has always seemed to have more of a melodic touch than most of your ‘90s contemporaries. To what do you attribute that and who do you guys count as songwriting influences?

Zuniga: I just like melodic stuff. I always have. I enjoy other kinds of music but nothing beats a well-written song with an amazing melody. The Beatles are obviously a big influence but I love and listen to a lot of different kinds of music. Howling Wolf, Monk, Mingus, Bob Marley, Willie Nelson, Brian Eno, Nick Cave, Tom Waits… I listen to all kinds of stuff, but I know what I do well. I could write a certain kind of song but I wouldn’t be able to pull it off. Ultimately I’m writing the songs for me to sing and so that narrows it down as to what I’m going to do.

NT: You guys have always had a knack for making fun, interesting music videos. What can you tell us about the three new ones you guys shot for “We’re On Our Way," “Behind The Sun," and “I Will Never Let You Down” and why did you pick those specific songs for videos?

Zuniga: We’re lucky to be friends with Nigel Dick. Nigel directed “Sweet Child of Mine” for Guns N’ Roses, “One More Time” for Britney Spears, and “Wonderwall” for Oasis, just to name a few. He’s a genius and we cranked those videos out as fast as the record. We shot one a day. Originally we were just going to do “We’re On Our Way” and “Behind The Sun,” but Nigel really liked “I Will Never Let You Down.” Tony did a great job acting in that one. “And the Oscar goes to…”

NT: How has your songwriting been shaped by having such a huge hit like "The Way" come about so early in your career?

Zuniga: It’s a blessing and a curse. That song is not our best song, I personally think “Out Of My Head” is better, but “The Way” is our biggest song. I’m always just trying to write the song in front of me and while I’m writing it, I’m just trying to finish the song without ruining it. The initial inspiration is almost always good but there are a million ways to ruin it and only a few ways to set the plane down without crashing. You can easily ruin it by trying to force it, or over-thinking it. It’s a strange alchemy. It helps to play the song for other people and then you can see what it needs. If people are excited by it that’s great, if they’re staring at their phone midway through, it’s not that great.

NT: One of your ‘90s hits "Out of My Head" has recently been re-imagined for the chorus of Machine Gun Kelly's new single "Bad Things." How did you first learn of your song's new life and what do you think of what MGK did with it?

Zuniga: Our publisher told us they wanted to use the tune and sent us the track. We liked it so we worked out a deal with them. “Bad Things” is giving “Out Of My Head” a whole new life. It’s exposing us to a brand new audience. It’s in the Top 20. I told you that was our best song.