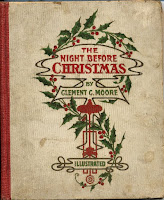 (While I first wrote this piece back in 2010, it's always a favorite to repost on Christmas Eve. So, here you go. Merry Christmas, you guys!)


“A Christmas Sighting ('Twas The Night Before Christmas)” – Star Wars Christmas: If Henry Rollins' reading wasn't left-of-center enough for you, how about the reworking from Christmas in the Stars: A Star Wars Christmas Album that is read by C-3PO and takes place in a droid-run toy factory. I make no bones about it that this is legitimately one of my most favorite Christmas records and each track on it holds such a nostalgic niche in my heart. This one deviates the most from the original poem - at least in setting and atmospheric elements - but the heart and overall theme are still there, so it can certainly still be included on this list amongst the more traditional heavyweights.

"A Christmas Sighting ('Twas The Night Before Christmas)" - Star Wars Christmas
Posted by Will Hodge at 10:31 AM