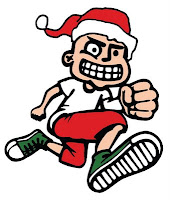 (While I initially wrote this piece back in 2010, it's one of my absolute favorites to re-gift to you guys with another song or two added each year.)

“Silent Night” – The Dickies: From late, great 1978, it's campy, pop-punk legends The Dickies with their super fun take on the old 19th century Christmas hymn. This is the band that also released singles about Gigantor and The Banana Splits, so you know what you're getting with a Dickies song. Goofy, fast, loud, big bassed '70s punk never goes out of style with me and thankfully I don't have to put that on hold during the Christmas season thanks to The Dickies!

“Punk Rawk Christmas” - MxPx: In 2009, MxPx compiled all of their fan club Christmas singles and added a few new tracks to release the incredibly awesome Punk Rawk Christmas. The title track was a new recording and perfectly captures the desire to have a good Christmas in the midst of whatever issues, financial or otherwise, that may be going on. One of my favorite bands plus my favorite holiday equals an album that pumps even more yuletide awesomeness into the season.

“Christmas on Mars” – Groovie Ghoulies: Is this the best Christmas 7" vinyl single of 1992? Probably so. I mean, sure, Bon Jovi released "I Wish Everyday Could Be Like Christmas" on the flip side of their "Keep the Faith" single that same year, but "Christmas on Mars" is at least the best A-side, right? I really love listening to this one on dark morning commutes to work during the Christmas season to pump me up for both the day ahead and also the season in general. At least than 2 and a half minutes, this one doesn't run the risk of overstaying it's holiday welcome. Plus, there's not enough "Christmas in space" songs out there You just can't lose with this one!

"Santa Claus Is Thumbing To Town" - Relient K
Posted by Will Hodge at 11:03 AM