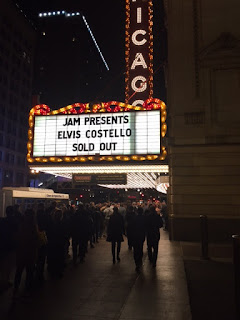 For his Imperial Bedroom & Other Chambers tour, Elvis Costello promised to revisit selections from his 1982 album of the same name, as well as “the songs that led in and out of that velvet-trimmed playhouse.” With an almost 40-year deep catalog to pull from, Costello’s Saturday night show at The Chicago Theatre proved to be an eclectic and dazzling trip through some of his deep album cuts, big hits, and new, unreleased gems.

Impeccably backed by his “second” band The Imposters (organist Steve Nieve, drummer Pete Thomas, and bassist Davey Faragher), Costello played very few songs as they were originally recorded, preferring instead to have as much fun with his songs as he wanted. With his sly, wink-and-a-nod frontman face on in full force, Costello led his band – as well as two incredibly soulful background singers (Kitten Kuroi and Yahzarah) – through a 2 hour and 45 minute, 30-song, double encore set that was anchored by almost the entirety of Imperial Bedroom. (For those keeping score at home, “Little Savage” and “Boy with a Problem” were the only missing cuts from the album’s original tracklisting).

It’s no surprise that The Imposters were able to keep up with Costello’s twisting set list and his playful reinterpretations, as Nieve and Thomas were a part of Costello’s original band The Attractions, who recorded not only recorded Imperial Bedroom but have played with Costello since his second album, This Year’s Model. Faragher, who joined Costello’s band in 2001, not only handled Costello’s earlier material with energetic expertise, but also contributed some beautiful background vocals and created the stunning vocal arrangements for Kitten Kuroi and Yahzarah.

After kicking the show off with a soulful romp through “The Town Where Time Stood Still,” Costello greeted the crowd - “Welcome to the Imperial Bedroom! We’ve decorated the place up nice for you!” – and gestured to the giant video screen behind them that shuffled through Costello’s album and singles artwork that had been reworked to incorporate elements of the artwork from Imperial Bedroom. It was an incredibly cool touch that added an additional element of surprise and playfulness throughout the entirety of the show. 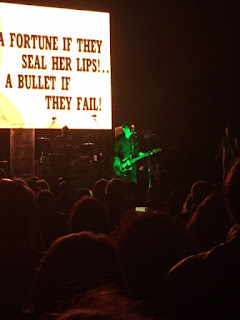 Song after song, Costello and his band showed an unbelievable versatility in the genres and moods they invoked. “Lipstick Vogue,” “Pump It Up,” and “(What’s So Funny ‘Bout) Peace, Love, and Understanding” were played with a relentless punk fury, while “Shot With His Own Gun,” “Almost Blue,” and “This House Is Empty Now” made the room feel like a late-night hotel bar. “Tears Before Bedtime” and “The Long Honeymoon” were marked by a slow-burn slink and some incendiary guitar solos from Costello lifted “Shabby Doll” and “Pidgen English“ to intense heights. One of the night’s most memorable moments came when Costello brought his background singers to the front of the stage and the three of them sang a solo electric version of “Alison” all around one microphone. Show-stopper “Watching the Detectives” – with Costello awash in a green spotlight and the video screen cycling through a variety of film noir b-movie posters – made for an unforgettable crowd-engaging favorite as well.

After the first full-band encore – an excited “Town Cryer” and a straight-ahead take on “Everyday I Write the Book” – Costello came back out by himself to start the second encore. Decked out in a purple top hat and carrying a snazzy scepter, Costello asked, “Are you waiting for me to announce my candidacy?” He then launched into a trio of new politically minded songs from behind the piano. Written for an upcoming stage musical title A Face in the Crowd, the three new songs – “Blood & Hot Sauce,” “Face in the Crowd,” and “American Mirror” – built upon each other thematically, lyrically, and musically; with Costello playing the first by himself, the second with Nieve added on organ, and the third with his full band and singers. After the batch of unreleased newcomers, Costello closed the night out with two of his most raucous fan favorites, “Pump It Up” and “(What’s So Funny ‘Bout) Peace, Love, and Understanding” to uproarious approval. 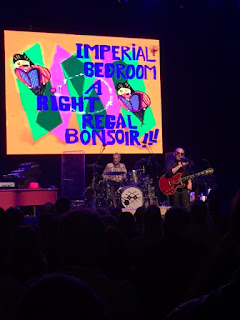