Party of One by Dave Holmes (Book Review) 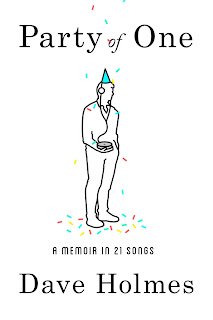 As a huge just-can’t-get-enough fan of MTV-related books like I Want My MTV and VJ, I must admit that I was really excited when I first heard that former MTV VJ Dave Holmes was going to write a memoir. Not only did I appreciate the encyclopedic everyman combo he exuded during his tenure at the network throughout the late 1990s and early 2000s, but I was also confident in the man’s writing ability after years of following his post-MTV pursuits as a columnist/essayist/contributor for publications like Esquire, GQ, Rolling Stone, New York Magazine, Vulture, and more. As it seemed that I had always wanted his writings to go on just a little bit longer than his articles ever did, knowing that I could finally look forward to a bookful of his stories and insights was music to my ears.

Party of One takes on the dual responsibility of being Holmes’ first book and also a memoir, so it’s almost like he’s stepping out of his comfort zone and putting himself out there twice. Luckily, he backs it up with prose that is equal parts witty and introspective, stories that are achingly honest and charmingly endearing, and enough splashes of 80s-90s-00s pop culture nostalgia to have readers connecting with Holmes like a long lost friend they’ve never actually met. I mean, his tagging of a paragraph referencing Pearl Jam’s “Elderly Woman Behind the Counter in a Small Town” with the sentence “You and SWV will be back harmonizing over Fruitopias before you know it” almost had me sending the man a far-too-fanboying email.

Holmes’ engaging storytelling ability is on full display in Party of One as he details his life as the self-described odd man out – growing up as “the artsy son in a sporty family,” navigating through an all-boys high school and a Catholic college as the “closeted gay kid surrounded by crushworthy straight guys,” turning his unfulfilling ad agency career into an accidental-yet-rewarding MTV VJ gig (via a contest in which he placed second) – and they are all expertly woven around mini asides that expound on the music and pop culture easter eggs Holmes sprinkles throughout his tales. Tagged as “Interludes” with titles like “Seven Pieces of Pop Culture That Prevented Me from Leading a Normal Life” and “The Ten Most Important Videos from My Tenure at TRL,” these listicle-like mini-chapter provide nice segues between Holmes more intimate chapters. Much like those 90s soundtracks that include dialogue from the film/show between each song, these interludes provide additional context to sweeten and solidify the whole. There’s even one named “All Right, You Jackals, Here Are Some Stories About Famous People” because where else would the Dave and Kid Rock in a hot tub type stories go?

For anyone who dug Holmes during his MTV days or has followed his writing-hosting-acting endeavors of the last decade or so, Party of One is a fantastic look into Holmes journey from feeling like he was on the outside looking in, to actually being on the inside and kind of wanting back out, to finally just accepting himself wherever he may be. While Party of One isn’t necessarily written to be inspirational, it’s certainly an unintended consequence of Holmes’ lethal humor-and-honesty writing style. Here’s hoping there’s an after-Party of One already in the works.
Posted by Will Hodge at 5:51 PM No comments:

The Bangles - Ladies and Gentlemen… The Bangles! (Album Review) 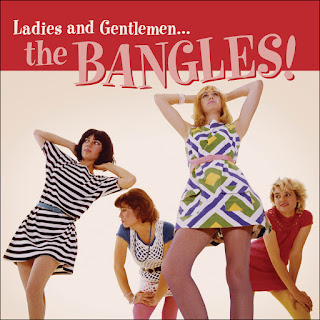 When listening back to a legendary band’s earliest recordings, there are a couple of different scenarios that can play out. Ranging from the dismissive end of “Wow, this sucks” to the middle ground of “Wow, they’ve come a long way” to the higher end of “Wow, they’ve just always had it,” it’s always a gamble for an artist or band to revisit their greenest days in a single cohesive album. Sometimes the best they can hope for is just the understanding acceptance of the completist’s desire for everything.

And then they are collections like Ladies and Gentlemen… The Bangles! from the Paisley Underground’s most celebrated band.

Ladies and Gentlemen… The Bangles! is a 16-track collection of the band’s first recordings spanning the years 1981 through 1984. Capturing the band before they ruled the pop charts and had MTV on lockdown with hits singles like “Manic Monday,” “Walk Like An Egyptian,” and “Eternal Flame,” Ladies and Gentlemen… The Bangles! highlights the fact that what made The Bangles special – the 60s sun-soaked harmonies, the garage-rock rumble, the psychedelic influences, the richly-textured instrumental interplay – was always present. Even in its most unpolished incarnations, there’s no denying that the band - Susanna Hoffs and the Peterson sisters (Vicki and Debbie), as well as original bassist Annette Zilinskas and replacement Michael Steele – made fun, original, culture-impacting music that was fueled by, as Hoffs attests, “youthful energy, hope, and blind ambition.”

While this album was initially released as a download-only LP in 2014, this CD provides fans the opportunity to own these rarities in a physical format for the first time. Longtime out-of-print releases like their debut single from 1981 (“Getting Out of Hand”) and their first eponymous EP from 1982 – the former recorded while they were still known as The Bangs – are presented here, as well as hard-to-find tracks like the instrumental “Bitchen Summer/Speedway” (from 1982’s Rodney on the ROQ Volume III compilation), “NO MAG Commercial” (a rerecording of “Getting Out of Hand” with new lyrics for the L.A. magazine of the same name), and “The Rock & Roll Alternative Program Theme Song” as well.

Rounding out the tracklisting of this stellar gem-packed record are a few unreleased demos and live recordings that include their Bangles-stamped covers of influential songs by The Turtles, Love, and Paul Revere & The Raiders. For a peek into the embryonic, pre-fame version of one of the biggest bands of the ‘80s and earl ‘90s, do not miss this sonic introduction into The Bangles’ back catalog.

But What If We're Wrong? by Chuck Klosterman (Book Review) 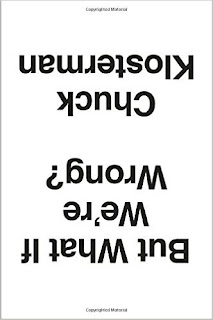 “We constantly pretend our perception of the present day will not seem ludicrous in retrospect, simply because there doesn’t appear to be any other option. Yet there is another option, and the options is this: We must start from the premise that – in all likelihood – we are already wrong.”

This thesis statement perfectly lays out Chuck Klosterman’s engaging and inquisitive challenge threaded throughout the entirety of his new book But What If We’re Wrong?: Thinking About the Present As If It Were the Past. In his distinctive critique-plus-curiosity style, Klosterman takes a variety of subjects – science, history, music, sports, dreams, literature, the Constitution, and the technological simulation of the human experience – and tries to dismantle and reassemble them within the context of future hindsight. That is, trying to deduce what present-day accepted truths will turn out to be false by speculating how future generations might look back on them. I use the word “speculating” instead of “prophesying” because Klosterman does an incredible job of exploring all aspects of the “yes, no, maybe” possibilities instead of leaning too hard on any one of them and painting himself into too many corners.

In fact, Klosterman speaks specifically against the certitude-in-perpetuity of the collective cultural consciousness and argues, not just that we’re wrong about some things (a less-specific thought most any intelligent person would agree with), but that we’re probably wrong about some very big, very foundational, very specific things (an experience most intelligent people don’t want to get too concrete about). Early in the book, Klosterman asserts, “there’s certainly a difference between collective, objective wrongness (e.g., misunderstanding gravity for twenty centuries) and collective, subjective wrongness (e.g., not caring about Moby-Dick for seventy-five years).” By continually slicing and dicing the nuances between those two ideas, Klosterman attempts to answer some “profound in their simplicity” questions about contemporary society. In doing so, his point is not to compile an arbitrary list of predictions, but rather to highlight the importance of “humility and wonder” - the beneficial by-products of “constantly probing the possibility that our assumptions about the future might be wrong.”

As an author, Klosterman has made a name for himself through an impressive and enjoyable catalog of pop cultural criticism, entertainment analysis, and even some enthralling fiction narratives, and But What if We’re Wrong? marks both a continuation in this work and also an incredibly insightful foray into new ground as well. Klosterman writes in a way that shows a willingness to wrestle with some heady topics – How will our understanding of gravity continue to evolve? How is history constructed? Given enough time, will our feverish adherence to the Constitution become our greatness weakness? Why do we take the act of dreaming (and the content of our dreams) less seriously than previous civilizations? Is it possible that our reality is a construct of a computer simulation? – as well as tread familiar ground in his application of these bigger questions to music, literature, entertainment, and sports – Which artist/band will be the singular definitive representation of rock music in 500 years? For future generations, will football be the only surviving team sport because of its inherent violence or will it disappear along with every other team sports. Which of our current writers will be most remembered by future readers, and are they completely unknown to us now or are they known and widely disrespected?

After reading through (and immensely enjoying the filter shift of) But What if We’re Wrong?, one thing about future hindsight is clear. While Klosterman’s literary catalog has always shown an upward trajectory of ever-increasing quality and merit, he will most likely not be able to see another leap of this magnitude in regards to the gravitas of this book. Meaning, he will most likely continue to keep becoming a better writer with each book, but the gap of forward momentum covered between books may never be as big as it currently is. I can’t recommend But What if We’re Wrong? enough and if your experience is anything like mine, you wont be able to put this book down and we will all be returning to it every 5-10 years to reset our current perspective on the future’s past.

As a bonus, here's a quick interview with Klosterman about his new book (courtesy of NPR):
Posted by Will Hodge at 11:11 PM No comments: