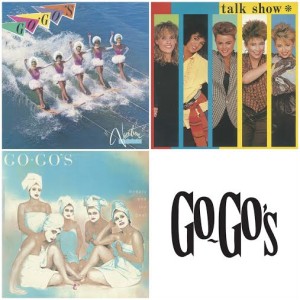 When considering everything the Go-Go’s accomplished in their all-too-short initial run in the 1980s, it’s hard to believe that they did it all behind just three albums. However, listening back through the trio of releases – Beauty and the Beat, Vacation, and Talk Show – especially in back-to-back fashion, it’s crystal clear to see (or, more specifically, hear) just how strong the foundation is that established the group’s impressive musical legacy. With this year’s expanded catalog reissues of all three studio albums from Edsel Records, that feat is easily accomplished and highly recommended. Between the original tracklistings, the bonus songs, and the comprehensive liner notes from new interviews written by Paul Myers, these reissues are definitely must-haves for any Go-Go’s fans.


Beauty And The Beat (1981): Just a few short years after forming as an all-girl answer to L.A.’s burgeoning punk scene in the late 1970s, the Go-Go’s released their debut album Beauty and the Beat on I.R.S. Records in 1981. On the back of hit singles (and heavy rotations videos for) “Our Lips Are Sealed” and “We Got The Beat,” Beauty and the Beat hit #1 on the Billboard 200 and eventually went 2x Platinum in the U.S. alone. Album tracks like “This Town,” “Lust to Love,” and “How Much More” proved that there was much more to the Go-Go’s than just a couple of hit singles and helped propel Beauty and the Beat to be viewed as one of the landmark examples of early 80s New Wave.

Along with Paul Myers’ enthralling liner notes containing new interviews with the band members and a fascinating narrative of the Go-Go’s origin story, Edsel’s deluxe reissue includes a wonderful treasure trove of b-sides, demos, rehearsal takes, and live tracks. Disc One rounds out the original album’s tracklisting with “Surfing and Spying” (the b-side to the “Our Lips Are Sealed” single), the single mix of “We Got The Beat,” and a variety of early pre-album Go-Go’s songs like “Fun With Ropes,” “Blades,” and “Screaming.”

Disc Two features a 1981 Go-Go’s concert at The Metro Club in Boston recorded just one month after the release of Beauty and the Beat. The 17-track live show exquisitely captures the band in all its raw, fun, and talented glory, with the youthful exuberance of Belinda Carlisle’s vocals and the sunshine vibe of Charlotte Caffey and Jane Wiedlin’s guitars crafting a playful foil to Gina Schock’s thundering drums and Kathy Valentine’s locked-in bass lines. Throughout the show, the band plays through the entirety of Beauty and the Beat, sprinkling in a few coy covers (“Cool Jerk,” “Let’s Have A Party,” and “(Remember) Walking in the Sand”) and a few new tracks from their yet-to-be-recorded sophomore follow-up, Vacation.


Vacation (1982): After the smash success of Beauty and the Beat and a rigorous touring schedule, the Go-Go’s turned right around and started working on their next record, Vacation. While some of the songs that would define Vacation were already in the Go-Go’s setlists around the release of their debut album (as evidenced by Disc Two of Beauty and the Beat), many others were written during hectic, tension-fueled sessions at Malibu’s Indigo Ranch Studio, as the band was temporarily relocated away from their L.A. stomping grounds to try and help alleviate some of the in-fighting and drug and alcohol use. The band pulled it together for another successful release, with Vacation peaking at #8 on the Billboard 200 and the title track single garnering them another Top 10 hit with accompanying MTV heavy airplay.

Edsel’s reissue again includes an insightful Paul Myers’ narrative/oral history from new interviews with the band, as well as another batch of standout bonus gems. The seven bonus tracks include: “Speeding” from the Fast Times at Ridgemont High soundtrack, an early demo of their cover of The Capitols’ “Cool Jerk,” four live tracks from a 1981 performance at Palos Verdes High School (including a lovely pass at early track “London Boys”), and a live version of “We Don’t Get Along” recorded a couple of months before Vacation’s release.


Talk Show (1984): While an impromptu post-Vacation Go-Go’s-only road trip to Palm Springs helped bring the band a little closer together during the splintering that occurred in midst of their whirlwind successes, the writing was still pretty much on the wall when the band traveled to England to record their third album. There traveled to the U.K. to work with producer Martin Rushent, hot off his work on Human League’s 3x Platinum Dare album. Rushent’s studio was outfitted with many instruments – specifically electronic drums, synthesizers, and samplers – that had previously not been a part of the Go-Go’s sound. While some band members were excited to try out the new sonic possibilities, others – namely drummer Gina Schock – were not. The resulting album still turned out a hit single (“Head Over Heels”), but overall it barely cracked the Top 20 and sold just shy of Gold status. By the next year, Jane Wiedlin had departed for a solo career and the Go-Go’s had officially broken up.

Much like Edsel’s reissue of Vacation, Talk Show contains another entry in Paul Myers’ liner notes and a slew of tasty bonus tracks. In fact, there are as many bonus cuts as original songs on this one, coming in at 10 each. For the bonus tracks, there’s another single-only b-side (“Good for Gone” from the “Head Over Heels” single), a single mix of an album track (“Yes or No,” the last single released by the 80s-era Go-Go’s), three live cuts from a concert at The Greek captured just five months after the album’s release, two tracks from the band’s 1990 reunion, and the three new songs they wrote and recorded for their second reunion in 1994 that originally appeared on the compilation album Return to the Valley of the Go-Go’s.


While these three stellar reissues are U.K.-only releases, they can be ordered directly from Edsel or Amazon pretty easily. As far as reissues go, Edsel really delivered on the necessities (interesting liner notes and notable bonus tracks) and I can’t recommend enough that Go-Go’s fans go out and purchase these gorgeous pieces.
Posted by Will Hodge at 6:53 PM No comments: 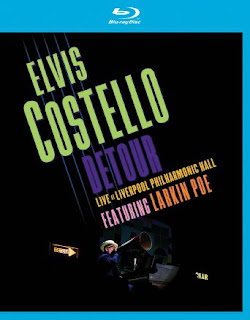 For artists with long, multi-decade careers, it’s one thing to have an incredibly rich songwriting catalog to continually pull from, but it’s something completely different when you can tweak and reinvent those songs in interesting and imaginative ways over and over again. For Detour Live at Liverpool Philharmonic Hall, Elvis Costello once again shows his unique ability to do just that with his own vast treasure trove of songs.

Captured on his recent solo Detour Tour, Costello’s new DVD spotlights his ability to both rework a song and retell a tale. Costello kicked the show off with a laid back, acoustic take on "(The Angels Wanna Wear My) Red Shoes" and kept the chilled out, strum-along vibe going for the first few songs, fully embodying the Nick Lowe-esque acoustic cool he has continually flirted with throughout his career. After a couple acoustic numbers, he switched to an overdriven hollow-body electric, a seemingly minor move that added a tasty aural oomph to the originally piano-led “Church Underground” from his last official solo release, 2010’s National Ransom.

Costello’s twisting and turning continued throughout the duration of the 23-song main set. He ran acoustic guitars through distortion pedals, turned his Sam & Dave soul cover of “I Can’t Stand Up For Falling Down” into a aching piano ballad, used a loop pedal to deftly accompany himself through a growling “Watching The Detectives,” and even employed the large mocked-up television screen behind him at different times to (a) jump inside himself for a tender singer-songwriter take on “Alison” (“The only way I can guarantee to be on television is to have my own”) and (b) play a vintage video clip of his dad performing “If I Had A Hammer,” eventually joining in to lead the crowd in the family sing-along.

It was during this technologically enhanced father-son moment that Costello first brought out his special guest for the evening, Larkin Poe (Rebecca and Megan Lovell). The rootsy sibling duo joined Costello for “Pads, Paws, and Claws,” “That’s Not The Part of Him You’re Leaving,” “Down on the Bottom,“ “Blame It On Cain,” “A Good Year for the Roses,” and a rollicking stomp-through of “(What’s So Funny ‘Bout) Peace, Love, and Understanding.” Combining sisterly harmonies, tasty mandolin, and slinky slide guitar, Larkin Poe added a nice rustic depth to Costello’s acoustic numbers.

Interspersed between all of the magical music moments, Costello spun yarns of quick stories and one-liners: tales of a taxicab tryst before “Accidents Will Happen,” homage paid to actress Gloria Grahame before “Church Underground,” woes of working as a computer operator before “Shipbuilding,” explaining the thrill of his 9-year-old self watching his dad share the bill of the 1963 Royal Variety Show with The Beatles before “Ghost Train,” and lovingly paying tribute to his Depression-era shipman-turned-musician grandfather before an emotional “Jimmie Standing in the Rain”/”Brother, Can You Spare a Dime?”

In fact, this latter story-and-song moment makes the DVD worth the price of admission on it’s own. The fact that it’s surrounded by so many other memorable performances is just a testament to Costello’s multi-tentacled talents. Along with the main set, there’s also some impressive bonus tracks on the DVD as well, including “Love Field,” “Either Side of the Same Town,” “Brilliant Mistake,” and “Ascension Day.” Costello fans would do themselves well to pick up this incredible collection of the master in his one-man-show glory.
Posted by Will Hodge at 10:16 PM No comments: