The Jam – About The Young Idea (DVD Review) 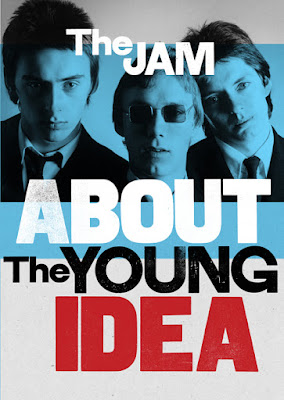 “We stopped at the right time, but the music’s gone on… Good enough, eh? That’s a good place to leave it.” Paul Weller’s closing thoughts on About the Young Idea, the new documentary about legendary UK mod-punk band The Jam, sums up the band’s career and their lasting legacy in a deceptively succinct manner. However, over the course of the film’s 90-minute run time, The Jam’s entire birth-to-break-up story is unfolded in far more detail, drama, and fanfare.

Although The Jam were only around for a relatively short time – releasing their first album in 1977 and breaking up by 1982 – they unquestionably made an indelible mark on music and pop culture with their unique sonic and aesthetic imprints. While they routinely get lumped in with their peers in the UK-brand of 70s punk rock of The Clash and The Sex Pistols, The Jam favored suits over safety pins and their music was far more melodic than most. Capturing the passion, restlessness, joy, and angst of working-class English youths, The Jam managed to ignite the underground, achieve chart-topping success, and bow out on their own terms, all while maintaining their own brand of songwriting, attitude, and street cred.

For its release, About the Young Idea is being paired with When You’re Young, a stunning, never-before-released 22-song concert film of The Jam performing on German television’s Rockpalast show from 1980. There are also a ton of bonus features on the first disc, including additional interviews and other musical performances from the band’s career. The Deluxe Edition houses even more extras, including a CD of the Rockpalast show and a 40-page booklet.


About The Young Idea (Documentary) – “It was The Who, kissed by Motown, with a dash of The Clash.” This is how music journalist Barry Cain sums up the sound of The Jam during one of the new interviews featured in About The Young Idea. Foregoing the favorite narration-over-archival-footage style used by most music documentaries, About The Young Idea tells the story of The Jam through a variety of modern day interviews. First and foremost, it’s really nice to hear all three band members – singer/guitarist Paul Weller, bassist Bruce Foxton, and drummer Rick Buckler – tell their own sides of the band’s collective rise to pop cultural prominence from their almost 40-years-on perspective. However, About the Young Idea really shines in relaying the band’s story through a revolving cast of characters of fans, industry personnel, photographers, authors, screenwriters, and actors.

Telling the story of The Jam from the band’s early formation in the UK suburb of Woking in the early 1970s to their break-up at the heights of their popularity in 1982, About The Young Idea is a thoroughly entertaining and surprisingly emotional recounting of the band’s successes and struggles. The film tracks their start as a trio to a temporary foursome and back to a trio again – which how they would remain throughout their rest of their career – and it elegantly maps their rise through the releases of their album and singles. Whether they were releasing their first two albums back-to-back within the same year, netting back-to-back #1 singles in 1980, or using the b-side covers on their very last single to hint at Weller’s new soul-infused sonic direction that he would perfect in post-Jam band The Style Council, The Jam knew how to keep fans excited and how to keep them guessing.

There’s an emotional narrative that’s woven extremely well throughout About The Young Idea that is eloquently captured in one of the documentary’s earliest scenes. As the band’s early formation is being laid out, a present-day Paul Weller and early bandmate Steve Brookes are shown playing through a rendition of “Bye, Bye Love” by The Everly Brothers and “Slow Down” by Larry Williams. Not only does the scene highlight some of The Jam’s early R&B influences, but it underscores the relational aspect of Weller’s musical career. Even when he hasn’t played with someone for a very long time, the bond that was formed when they initially made music together seems to allow him to just pick right back up with the person. While there has never been any positive speculation about the viability of The Jam reuniting, seeing how easily Weller is able to pick back up with someone still gives a fool’s hope to the possibility.

About the Young Idea closes with a modern day check-in on the band members and what they’re doing now, including Foxton’s involvement in quasi-tribute band From the Jam, Buckler’s stint as an author for his book That’s Entertainment, and Weller’s continuing solo career. While all three members address the reunion question – and all three agree to it not being a good idea – there’s certainly enough material in their catalog to keep fans intrigued and inspired for quite some time, an idea that is nicely driven home throughout About the Young Idea again and again.

When You’re Young (Concert Film) – This 22-track concert film recorded in 1980 for the German television show Rockpalast highlights the band at one of its most exciting and innovative periods. Recorded just a few days after the release of their fifth studio album Sound Affects, the band wisely relies on fan favorites like “Going Underground,” “The Modern World,”  “In The City,” and “Down in the Tube Station at Midnight” to bolster the inclusion of the brand new songs like “Start!” and “Boy About Town”. While the more well known songs get the biggest crowd reactions at their opening chords, When You’re Young wonderfully shows how The Jam was at a point in their career were fans were along for the journey on the new songs as well.

When You’re Young also does a phenomenal job of showing what made The Jam so special. Embodying the very sonic definition of “power trio,” Weller’s herky-jerky guitar stabs, Foxton’s aggressive and agile bass lines, and Buckler’s R&B-meets-punk drumming style carry each song to the dizzying heights that only The Jam could conjure. Weller’s on stage banter is minimalist at best, but his few-and-far-between song intros are coldly charming: “This one’s for anyone who was around in the early days. This is called ‘The Modern World’” and “Cynics beware. This one’s called ‘Scrape Away.’” After a burning closer of “Down in the Tube Station at Midnight,” Weller’s short and sweet “Thank you, goodnight” barely finishes ringing out before the band is completely gone from the stage. They came, they slayed, and they left before anyone really knew they were gone.  Pretty fitting indeed.

About the Young Idea is currently available on 2DVD, Blu-ray + DVD, digital format, and Deluxe Edition packages.
Posted by Will Hodge at 1:40 AM