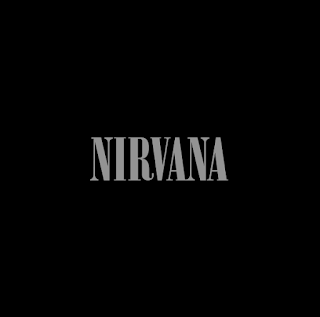 When Nirvana’s self-titled greatest hits album was first released back in 2002, fans were beyond excited to finally get their hands on “You Know You’re Right” from the band’s final recording session from eight years prior. However, if you wanted to hear “You Know You’re Right” and the rest of the album on vinyl, the only option was an expensive UK pressing. Thankfully, that has now changed with the recent US vinyl release of Nirvana in both a glorious 200-gram 2xLP 45RPM pressing and also a standard 33RPM single disc pressing.

Let me start this review by saying that the 200-gram 2xLP 45RPM pressing may be the best sounding pieces of vinyl in my entire collection. While I don’t descend too terribly much into “vinyl quality geek out” mode for my reviews, this high-quality pressing deserves the gush. From the first few seconds after dropping the needle on the opening bass/drum thump of “You Know You’re Right”, I could hear the lush low ends and clear highs that the heavier vinyl afforded. The added weight not only adds a more consistent richness (and stability) to the overall warmth of the audio, but it also gives the record more longevity against the normal wear that transpires over time with continuous plays. So it not only sounds better now, but it will also sound better for longer as well. Plus, the heavyweight vinyl over two discs feels really great in your hands. For a release like Nirvana, this definitely feels appropriate for the gravitas of the music it holds.

The tracklisting on the new US pressing of Nirvana differs slightly than the original UK pressing, as it remains consistent with the CD version that was released here. Therefore, the two import bonus tracks (both “Something in the Way” and “Where Did You Sleep Last Night” from MTV Unplugged in New York) are not present here, leaving the remaining 14 songs to be spaciously laid out over four sides (with the single disc 33RPM version splitting seven tracks apiece on each side). Along with featuring the first release of the then-previously-unreleased “You Know You’re Right,” Nirvana also contained a couple of other somewhat-harder-to-find gems, such as “Been a Son” from their UK-only Blew EP, “Sliver” from Incesticide, and the rare “single remix” of “Pennyroyal Tea” that was made exclusively for the song’s proposed release as a single in April of 1994 (which was eventually cancelled in light of Cobain’s death and finally released for Record Store Day last year).

The rest of Nirvana is comprised of singles and deeper album cuts from their more well-known releases, as the album was intended to tell the story of the band within one album. Their debut album Bleach is represented with “About A Girl,” both their multi-platinum breakthrough smashNevermind and caustically beautiful follow-up In Utero boast four cuts apiece (“Smells Like Teen Spirit,” “Come as You Are,” “Lithium” and “In Bloom” from the former and “Heart-Shaped Box,” “Rape Me,” “Dumb,” and the aforementioned single remix of “Pennyroyal Tea” from the latter), and their MTV Unplugged in New York album provides the two closing cuts (“All Apologies” and “The Man Who Sold the World”). While every Nirvana fan has their own personal omissions they would’ve loved to see included (“Molly Lips” for my two cents), Nirvana unquestionably delivers the best you can hope for in a greatest hits package. The fact that this inclusive retrospective can now be heard on such a superior medium makes it all the better and maybe, just maybe, even worth the wait.
Posted by Will Hodge at 8:01 AM