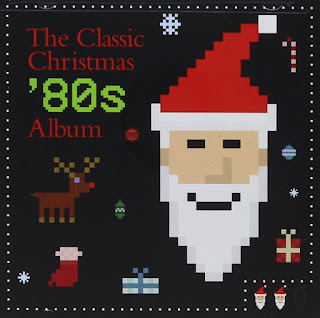 As far as ‘80s Christmas holiday samplers go, this year’s The Classic Christmas ‘80s Album from Sony/Legacy is definitely an interesting addition to the seasonal canon. While not reinventing the wheel (if that is even possible with a decade-specific, theme-specific release such as an ‘80s Christmas album), The Classic Christmas ‘80s Album certainly has some inspired choices and some non-traditional entries that make this “not just another seasonal sampler” undoubtedly worth picking up.

As with any ‘80s Christmas compilation, there are some definite “must haves” that always make the list. Presented in the 15-song tracklisting here are such classics as: "Christmas Wrapping" from The Waitresses, "Last Christmas" from Wham!, "Christmas in Hollis" from Run-DMC, "Jingle Bell Rock" from Hall & Oates, “Do You Hear What I Hear?" from Whitney Houston,  and "Christmas Is The Time To Say 'I Love You'" from Billy Squier. They’re all Christmas favorites, all MTV classics, and all common ‘80s Christmas compilation fare.


However, it is in the unconventional choices that The Classic Christmas ‘80s Album really sets itself apart from the rest of the Reagan-era Yuletide collections pack. First off, I give The Classic Christmas ‘80s Album major props for including “Slick Nick, You Devil You” from Fishbone’s 1987 EP, It’s A Wonderful Life. While I personally would’ve gone with “Just Call Me Scrooge,” I was so stoked to see the funky, soul-punk band’s Christmas EP represented at all. Second, Ray Parker, Jr.’s bouncy “Christmas Time Is Here” never shows up on these things! Originally a b-side to his 1984 single “Jamie” (the disappointing follow-up to the smash success of his “Ghostbusters” single), “Christmas Time Is Here” would probably be destined to languish there, were it not for this compilation. Third, The Classic Christmas ‘80s Album closes with “Silent Night” from The Hooters, a rare Christmas single from the Philadelphia rock band that was released as the B-side to a split Christmas 7” vinyl single that featured Shawn Colvin’s “Have Yourself A Merry Little Christmas” on the A-side. Even the inclusion of Bob & Doug McKenzie’s “Twelve Days of Christmas” (Rick Moranis and Dave Thomas portraying their “Great White North/Kanadian Korner” co-hosts that they played on Canadian sketch show SCTV) is a ridiculous and heart-warming choice that doesn’t often find itself on many Christmas compilations.

This deft combination of tried-and-true picks with a few left-of-center additions really makes The Classic Christmas ‘80s Album one worth picking up. Even the 8-bit inspired cover art evokes a nice throwback to yuletides of yesteryear. You can either spice up your current holiday playlists with this album or just bask in its nostalgic glow, but either way you should get your hands on this standout seasonal sampler.
Posted by Will Hodge at 6:30 AM No comments: 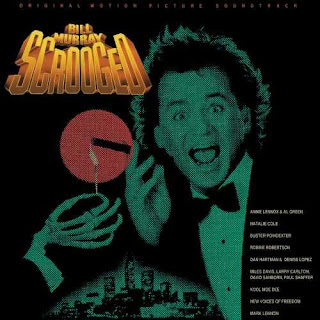 After years of being out-of-print on vinyl, ‘tis the season for Universal Music Group to reissue the original soundtrack for Scrooged. While the 1988 Bill Murray-led modernization of Dickens’s A Christmas Carol boasted a Danny Elfman-penned original score, it was the pop side of the movie’s diverse musical tableau that garnered the standout soundtrack release.

The nine-song soundtrack came out in 1989 and it was bolstered by the Annie Lennox and Al Green duet of the Jackie DeShannon classic “Put A Little Love in Your Heart,” which ended up hitting #9 on the Billboard Hot 100 and #2 on the US Adult Contemporary Chart. The fact that this decidedly non-holiday-themed track was selected as the lead single was actually pretty representative of the rest of the soundtrack, as many of the songs included didn’t have much, if anything at all, to do with Christmas. However, it’s still pretty cool to hear New Voices of Freedom’s cover of U2’s “The Sweetest Thing,” Buster Poindexter’s cover of Van Morrison’s “Brown Eyed Girl,” and Kool Moe Dee’s “Get Up ‘n’ Dance” all included in the same diverse collection.

For the more “Christmasy” fare presented on the Scrooged soundtrack, there are a few noteworthy nostalgic nuggets as well. Robbie Robertson’s updated take on The Band’s “Christmas Must Be Tonight” adds synth washes and percussive propulsion to the original’s laid-back groove. While Robertson’s redo sounds appropriately mid-80s in its sonic quality, it still offers a refreshingly original slant when compared to his previous band’s version. Likewise, the smooth electro-jazz version of “We Three Kings of Orient Are” courtesy of Miles Davis, Larry Carlton, David Sanborn, and Paul Shaffer sounds very much “of its day,” while still managing to present a fresh take on an old classic. The album closes with Natalie Cole’s moving rendition of “Mel Torme’s “The Christmas Song,” a holiday standard that was popularized by her father Nat King Cole through multiple recordings throughout the ‘40s, ‘50s, and ‘60s.

While the Scrooged soundtrack is certainly one of the most non-Christmas-themed-yet-still-associated-with-Christmas holiday albums you’ll ever find, it’s unquestionably one of the “go-to” ‘80’s Christmas staples. For this reason, it’s really nice to see it getting another life on vinyl with this year’s superb reissue.

If the music video for Annie Lennox and Al Green’s “Put A Little Love in Your Heart” wasn’t inherently ‘80s enough on its own merit, here’s a copy of the video that includes an opening bumper from Night Tracks (the TBS-run version of MTV):
Posted by Will Hodge at 6:47 AM 1 comment: 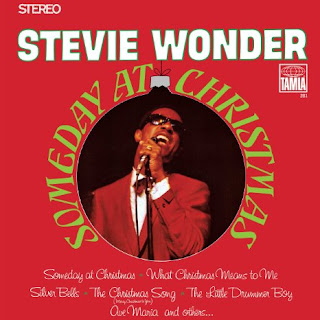 Since its original release on November 27, 1967, Stevie Wonder’s beloved Someday at Christmas album has been re-released and repackaged in a variety of different formats. This year, Universal Music Group is celebrating the Christmas classic by both reissuing it on vinyl (for the first time in years) and also restoring its original red-and-green, “young Stevie” cover art.

Wonder was only 17 when the album was first released, but you’d never imagine it by listening to the young prodigy’s stunning seasonal songcraft. His impressive vocals on the original songs like “Someday at Christmas” and “What Christmas Means to Me,” as well as his own takes on such standards as “Silver Bells” and “The Christmas Song,” make the album a yuletide must-hear from the first song to the last. Even on its own, the title track has become an unquestionable seasonal standard, with my own favorite interpretations coming from The Jackson 5 and Pearl Jam.


Originally released on Motown-imprint Tamla Records, Someday at Christmas is one of the label’s most renowned Christmas releases. Considering the label also released Christmas with The Miracles, Merry Christmas by The Supremes, The Jackson 5 Christmas Album, The Temptations Christmas Card, and its own double LP of holiday favorites A Motown Christmas, that’s saying quite a lot. The restored cover art drives home the Motown connection even more, as the back jacket promises "The Motown Sound" and contains snippet ads for holiday albums from The Miracles and The Supremes.

Bookended by “Someday at Christmas” and “That’s What Christmas Means to Me” - its two most classic cuts – Someday at Christmas sounds (and looks) totally worthy of UMG’s reissue. The audio sounds warm and polished in its vinyl setting and the restored artwork captures the nostalgic snapshot of the album’s original incarnation. Be sure to pick this one up as a present for the music fans in your life or as a sonic stocking stuffer for your own Christmas music playlist.

Proving both the lasting appeal of "Someday at Christmas" and also Wonder's unending musical legacy, check out Apple's newest Christmas commercial for this year (just released earlier this week):

Posted by Will Hodge at 9:47 PM No comments: