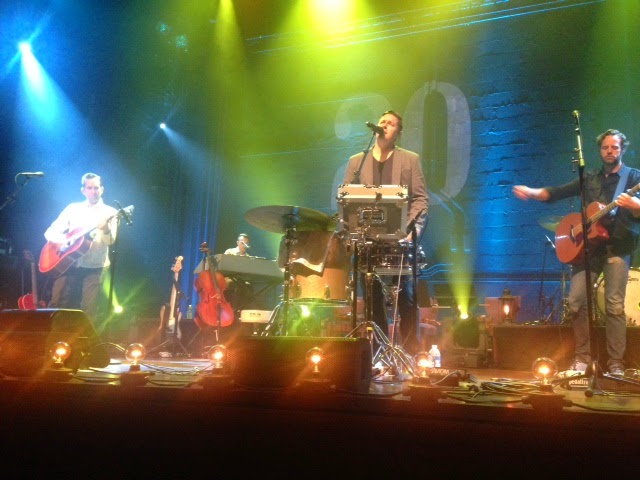 "This is not the story we would’ve written… but it’s the one we wouldn’t change.”

These words, spoken by Jars of Clay lead singer Dan Haseltine during a heartfelt introduction to the song “Inland,” proved to be a wonderfully appropriate theme to the band’s 20-year celebration show that took place Saturday night at The Franklin Theatre. As the band energetically played through two decades worth of material, the arc of Jars of Clay’s ever-evolving story and their ever-expanding sound was beautifully displayed in both loud and quiet moments of sheer sonic splendor.

In a move of appropriately pure sentimental grandeur, the band opened the show playing “Art in Me” as just a foursome. By playing a song from their debut album in the exact same manner fans would have seen them in at the beginning of their career in 1994, the tone for the evening was perfectly set. The dual acoustic guitars of Stephen Mason and Matt Odmark, the piano of Charlie Lowell, and the uniquely identifiable vocals of Haseltine leading the fray has certainly been one of the hallmarks of the band’s storied career throughout their expansive musical iterations.

However, nostalgia has never been something Jars of Clay has ever really been interested in. So even as the band played another early gem (“Fade to Grey”) for their second song, they were joined by cellist Matt Nelson, a prominent member of their touring band for the last year or so. Nelson remained for the majority of the show, fluctuating between cello, bass, and ukulele and adding impressive aural ornamentation throughout each song. His percussive accompaniment on “Work” added a really nice depth to the acoustic reworking of the Good Monsters rocker.

By the time they launched into their fourth song “Reckless Forgiver,” they had added another instrumentalist to the mix, frequent live drummer Jake Goss. Goss has played with Jars of Clay since 2010 and provides a stunning sonic backbone to a band that only occasionally employees a bass guitar in its live setting. His ability to drive the energetic moments and lay back during the quieter ones allows the songs to exist in really unique ebb and flow atmospherics.

The next few songs showed just a hint of the multi-instrumental prowess that Stephen Mason gets to fully unleash in the studio. “Loneliness and Alcohol” was given an aggressive double electric upgrade, “No One Loves Me Like You” was played on ukulele, and “Something Beautiful” featured his folksy acoustic guitar interplay with indispensable co-guitarist Matt Odmark. While Odmark’s rock-solid rhythm guitar and fantastic background harmonies added a beautiful supporting layer underneath each and every song, they seemed to feature a bit more prominently in the folk bounce of the next song “Eyes Wide Open.”

Again inviting additional instrumentation to the stage, a string trio joined the band to add a gorgeous cinematic sheen to “Boys (Lesson One)” and “Silence” before Blood:Water Mission co-founder Jena Nardella surprised the band with a pre-intermission announcement of a $20,000 donation that was given to Blood:Water Mission in honor of the band’s 20-year career. It was a beautifully poignant moment as just earlier that week it was announced that Blood:Water Mission had officially reached 1 million people in Africa with clean water.

After the intermission, Jars of Clay launched into an amped-up second set that made it seem like they had somehow opened up for a different version of themselves. After a quick intro of a piece of Much Afraid’s “Overjoyed,” the band launched into a bombastic rendition of “After the Fight” that featured some wonderfully chaotic electric guitar work from Odmark. Immediately after was an equally intense “Trouble Is” that featured Mason’s swampy, slinky slide guitar lines and Haseltine’s bluesy howl. After taking just a moment to catch their breath with “I Need Thee” and some nice words about the Indelible Grace hymn movement, the band featured a new version of “God Will Lift Up Your Head” that they had refashioned for 20, the fan-curated retrospective double album they recorded earlier this year. Joining them on stage for the radical reworking was Dan Michaels (The Choir) on a wonderfully wailing saxophone. 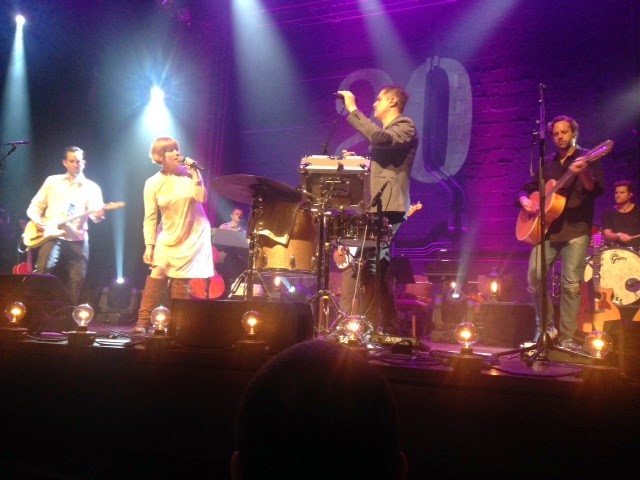 After a thundering-drum-and-slide-guitar runthrough of “Collide,” the band brought out another special guest, former Sixpence None The Richer vocalist and current solo artist Leigh Nash. Nash revisited the electric-folk romp “Smoke and Mirrors” from Good Monsters and her charming duet vocals with Haseltine were a definite highlight of the entire night. Charlie Lowell’s soulful organ stabs and fleet-fingered runs during this song added a tasty undercurrent to the song as well.

In a surprise move that was never more perfect than the celebratory occasion of that specific room on that specific night, the band played “Flood,” the song that gave them the unique dual-market splash of Christian and mainstream attention that afforded them the kind of non-pigeonholed career they ended up having. Although I had heard them play “Flood” numerous times in the mid-90s while touring on their first and second albums, it hasn’t exactly been the setlist staple it once was. Knowing the special moment that the band and audience were experiencing together, everyone seemed crazy into it and it elevated the song to a level I’d never heard it before. As a bonus, this was also the first time I had ever heard live strings going into the bridge section (courtesy of Nelson’s cello) as it is on the album. It was a pretty sweet moment all around to the least.

The band carried the energy into their closing back-to-back 1-2 knockout punch of “Dead Man (Carry Me)” and “Inland.” Haseltine was really reflective during his spoken introduction to “Inland” and the song’s anthemic chorus threatened to rattle down the historic walls of the theater. Closing with the title track of their most recent studio album (the rerecordings on 20 aside) was not only a move that reminded the audience of the forward-facing direction the band is moving in, but it was also one that reminded the band how far they had come from the fresh-faced foursome that recorded their debut demo in a college campus recording studio twenty years ago.

Of course, shows that carry this much weight don’t end without an encore though, right?!?

The band graciously opened their encore by asking if there were any requests. After a hilariously chaotic audience response, the band delivered a gut-wrenching “Oh My God” and a pair of requests from The Long Fall Back to Earth: “Two Hands” and “Safe to Land.” Then, the band invited the string trio back out for a tender closing twosome of tracks from their self-titled debut album. Fan favorite “Worlds Apart” garnered another fervent singalong and the new 20 version of “Love Song” featured more of the Lowell-led piano work that had eloquently peppered and elevated the entire set. 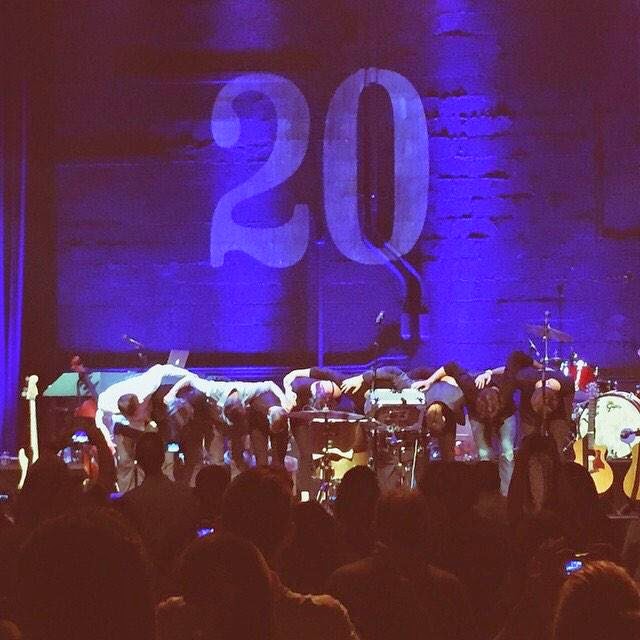 After taking another bow and leaving the stage, it was clear that even at the 20-year mark, Jars of Clay is showing no signs of wistful remembrance for what was. Instead they continue to opt for the path they have always chosen, the uncharted waters of what will be. 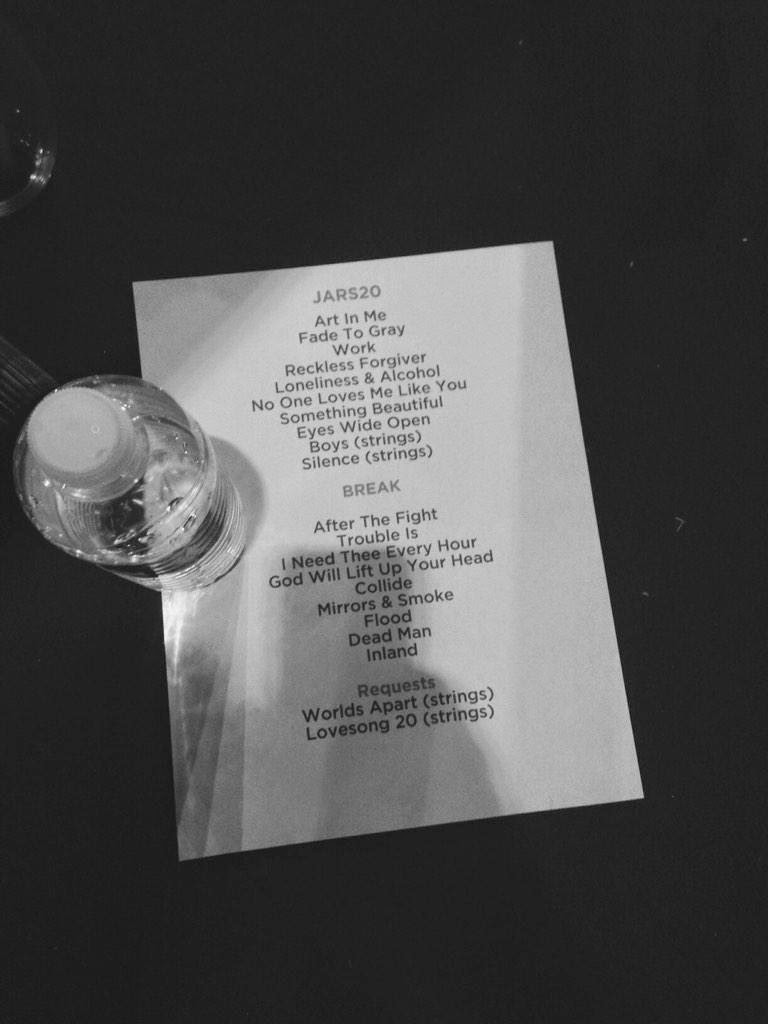 Earlier in the evening I had the distinct pleasure of moderating a pre-show Q&A with the band. The guys discussed the initial ideas behind the 20 album and the fun they had both seeing the fan selections and also rerecording the songs. They also fielded questions from the audience and pulled back the curtain a bit on themselves, their history, their influences, and whether or not Mason still has those electric orange cargo pants from the “Collide” video. 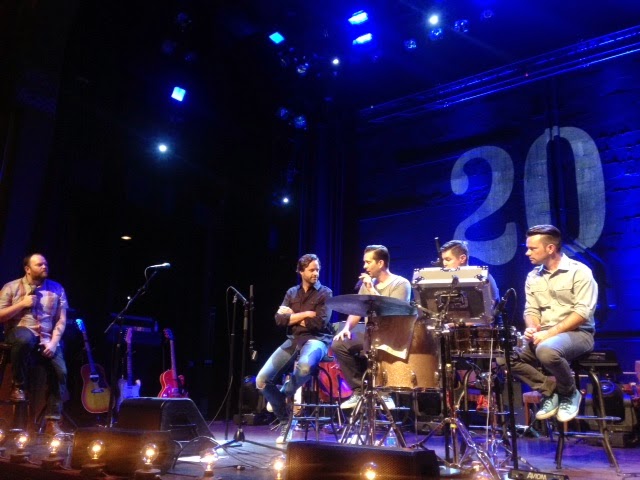 Photos courtesy of Amanda Hodge and @jarsofclay
Posted by Will Hodge at 12:20 AM