Having just witnessed my very first Bruce Springsteen concert, I can now officially echo Jon Landau’s prophetic endorsement that “I saw rock and roll future and its name is Bruce Springsteen.” Although that statement was originally made in a pre-Born to Run 1974, it holds as true today as it ever did then. After a 2 encore, 3 hours plus mixture of majestic musicality and sweaty showmanship, there is no question that Bruce Springsteen and the E Street Band is still the bar by which all other bands are measured. With no signs of slowing down any time soon, Springsteen seems content to be continually raising that bar with each show.

The follow-up sentence to that Landau quote proved equally fitting for me tonight as well: “he made me feel like I was hearing music for the first time.” While that could easily be shrugged off as euphoric post-show hyperbole, I can honestly say that there was a specific point in the show tonight where the music that was being created on stage was something I had never experienced before. During “The Ghost of Tom Joad,” honorary E Streeter Tom Morello (formerly of Rage Against the Machine) played an outlandishly otherworldly guitar solo – if you can call it that – that transcended the song to somewhere I’d never been before. Originally a Steinbeck-inspired, acoustic-led folk song, Springsteen has morphed “The Ghost of Tom Joad” in recent years to be an aural onslaught of instrumentation that matches the anger and indignance of the lyrics. Morello seemed to pull out every technique and trick in his inventive guitarsenal, effortlessly switching between bouts of manic melodiousness and surrealistic sounds. At one point, he even unplugged the guitar and furiously tapped the cable in the palm of his hand as he rocked out a rhythm on his beloved whammy pedal. But as jaw-dropping as it actually was, the thing that made the moment so special was how Morello’s boundless guitarwork fit in with what everybody else was doing. As Springsteen looked on, strumming away on his own guitar, the rest of the E Street Band provided the flawless atmospherics to support this feat of fleet-fingered fancy. That’s what makes Springsteen’s music and his shows so singularly special. It’s the unified combination of the band, the songs, the crowd, and, of course, the Boss.

Springsteen opened the show with “High Hopes,” the title track of his most recent covers and outtakes album. As the militaristic marching beat set the groove, the Bridgestone Arena crowd was immediately loud, engaged, and insatiable. Every song, new or old, seemed to be met with the same level of enthusiasm and top-of-your-voice singalongs. After a mix of Darkness on the Edge of Town favorite “Badlands,” Born in the U.S.A.’s “No Surrender,” and Wrecking Ball’s “Death to My Hometown,” Springsteen greeted the enthusiastic attendees to deafening approval. Continuing on with the crowd interaction, Springsteen took off his guitar and let the arena take the first verse of “Hungry Heart” as he wove his way through the fans on the floor. After resuming vocal duty midway through the crowd, Springsteen took the opportunity of Jake Clemons’ saxophone solo to crowd surf back to the stage, collecting signs of song requests along the way. As Bruce got back to the front of the stage, Clemons played the final few bars of his sax solo with one hand as he coolly pulled Bruce back on stage with the other. At this point, the crowd was at fever pitch and we were barely five songs in.

After a rousing “Spirit in the Night” from his 1973 debut album, Springsteen launched into his infamous “Stump the E Street Band” routine where he chooses a couple of songs based solely on sign requests. After some short instructions – “Key of D, band” – he did a convincing Elvis on “Burning Love” and then brought a young fan on stage to help sing on a loose cover of The Rolling Stones’ “Satisfaction.” Moving into a mini “Electric Nebraska” section, Springsteen and company amped up “Atlantic City” and “Johnny 99,” with Morella and the E Street horn section contributing stellar solos to the latter. “Johnny 99,” one of my absolute favorite Springsteen numbers, was played with the fervor and tenacity of a set closer. However, at this point, we were only 10 songs in.

Deciding to finally give the frenzied crowd a breather, Springsteen’s moving “American Skin (41 Shots)” was next. Originally written in 1999 after the controversial police shooting of Amadou Diallo and resurrected in 2012 in light of the heartbreaking Trayvon Martin case, “American Skin (41 Shots)” is equal parts somber and stirring, a tricky line that Springsteen is a master at traversing. After picking things back up with a raucous “The Promised Land,” E Street guitarist Nils Lofgren turned in an incendiary guitar performance on crowd favorite “Because the Night.” Although Lofgren and Morello have decidedly different guitar styles, their joint efforts compliment each other in a unique fashion that provides for some fun, eclectic moments. After another moment of deceptive dreaminess courtesy of “I’m on Fire,” Born in the U.S.A.’s “Downbound Train” and Wrecking Ball’s “Shackled and Drawn” mirrored the percussive thump of the show opener. For “Waitin’ On A Sunny Day,” Bruce grabbed another set of young fans to help with background vocals, reminding us all of large reach that Bruce and his music has over fans of all ages and generations. 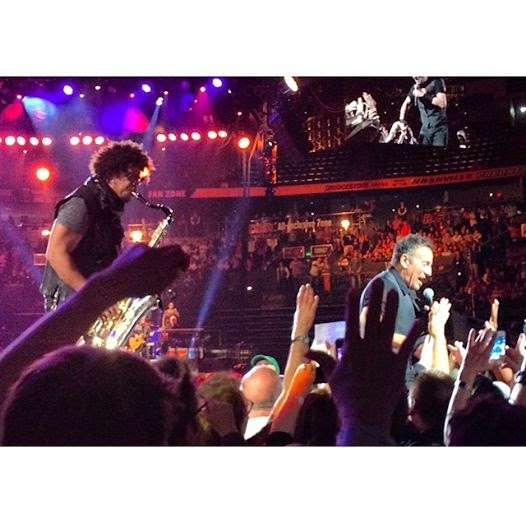 The first set closed mightily with Springsteen and Morello trading verses on “The Ghost of Tom Joad,” the palpable uplifting swell of “The Rising,” and the crowd losing their minds for “Land of Hope and Dreams.” Tagging the last song with a few lines of Curtis Mayfield’s “People Get Ready,” Springsteen left the crowd (if only for a moment) with a redemptive hope that was seen in the smiles and heard in the shouts. Surprisingly a few people in our section actually left at this point, unfortunately missing out on the fact that Springsteen encores are not to be missed.

For his first encore, Springsteen came back out to give an amazing tribute to fellow New Jersey musician Walter Cichon (and everyone else) who died in the Vietnam War and performed “The Wall” to thunderous approval. Next, he reached back to 1980’s The River for “Point Blank,” a surprising song that he hasn’t played on this current tour thus far. However, it was the closing foursome of songs that threatened to break Bridgestone in half. Starting with an anthemic “Born in the U.S.A,” the house lights would occasionally turn all the way so that everyone could see (and participate in) the party that was taking place on the arena floor. It was fist-in-the-air singing and like-nobody’s-looking dancing the entire time throughout “Born to Run” and “Dancing in the Dark” as well. However, the crescendo hit maximum intensity during “Tenth Avenue Freeze-Out” as the arena screens showed shot after shot of deceased E Street members Danny Federici and Clarence “Big Man” Clemons. As the song essentially tells of the beginnings of the E Street Band, Springsteen paused after hitting the lyric “When the change was made uptown and the Big Man joined the band” and the crowd erupted in tribute. Even after Springsteen closed out with "Shout" and his customary “You’ve just seen the heart-stopping, pants-dropping, house-rocking…” carnival barking, the crowd refused to call it a night. Springsteen came out for a second encore and played his laid-back, acoustic version of “Thunder Road” all by himself. As the crowd fought between trying to listen and singing every single word as loud as they could, there was no question that we had all been a part of something magical together; something that is not regularly experienced and not easily forgotten.

Encore #1:
The Wall
Point Blank
Born in the U.S.A.
Born to Run
Dancing in the Dark
Tenth Avenue Freeze-Out/Shout