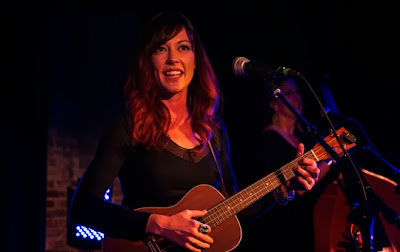 (This article was originally published on CMT Edge.)

This year’s Americana Music Festival certainly ended on a high (and lonesome) note in Nashville with two diverse, yet equally illustrative, showcases on Friday and Saturday (Sept. 20-21).
While the Station Inn served up a healthy helping of traditional bluegrass and folk tunes, the Basement highlighted artists dabbling in some of the more nontraditional branches of the musical melting pot called Americana.
On the closing night of the festival, Amanda Shires captivated the wall-to-wall Basement crowd with her unassumingly angelic voice and her gently strummed tenor guitar. Backed by a stand-up bass and drums, Shires’ wistful and contemplative songs tenderly floated through the room without clang or clamor. The deceptive effortlessness with which she played and sang belies the layered intricacies of her melodies and the emotional depth in her lyrics. In other words, she made it look easy.
For her too-short set, Shires mostly stuck with songs from her recently releasedDown Fell the Doves album. The soaring chorus of “The Drop and Lift,” the cha-cha slink of “Wasted and Rollin’” and the groovy sashay of “Bulletproof” proved to be crowd favorites.
A highlight from the Down Fell the Doves portion of her set was the imaginative “A Song for Leonard Cohen,” while my overall favorite moment of the night came when she pulled out “When You Need a Train It Never Comes” from 2011’s Carrying Lightning. She also invited Rod Picott to join her on guitar for the whistle-led “Swimmer” and “Shake the Walls,” adding her fiery fiddle skills to the latter.
The Basement’s Saturday night showcase also featured an eclectic group of artists surrounding Shires. With a banshee wail in his gut and a box of harmonicas at his feet, Parker Millsap wowed with his Springsteen-inspired “Disappear” and a heartbreaking ballad titled “Villain.” Millsap toured with Old Crow Medicine Show this summer, and his new album is tentatively scheduled for an early 2014 release.
Psychedelic garage-folk duo Hymn for Her ignited the crowd with their unique cigar-box electric guitar, kick drum, hi-hat and acoustic guitar combination. After opening with a frenzied new song (“The Road Song”) and a couple of songs from this year’s Lucy and Wayne’s Smokin’ Flames, they proclaimed, “All right. Enough death metal” and played a laid-back ukulele number called “November.” They finished their set with an ominous cover of Bob Dylan’s 1964 murder ballad “Ballad of Hollis Brown” that escalated into a howling, distorted bullet-mic masterpiece.
Tim Easton took his Sun Studio-flavored, ‘50s rock sound, added a fiddle and whipped up a top-notch band for his performance. Songs like “Troubled Times,” “Tired and Hungry” and “Little Doggie (1962)” chugged along with an incredible vintage rock romp, and his closing acoustic guitar/fiddle number “On My Way” showed an impressive versatility to his catalog.
Garage-rock blues quartet the Del-Lords ended Saturday night with a bang, causing the post-midnight crowd to erupt into dancing and singing. Starting in the early 1980s and releasing their most recent album Elvis Club earlier this year, the Del-Lords have quite a catalog to pull from. Songs like “I’m Gonna Be Around” and “Cheyenne” seemed to be immediate party starters for the late night crowd.
By contrast, Friday night’s festivities at Nashville’s famed Station Inn played a bit more to the traditional side of Americana. With no drums and barely an electric guitar in sight, one of the bluegrass community’s most renowned listening rooms proved to be the perfect stage to host the evening’s mandolin, banjo and fiddle-fueled acts.
Indie-folk quintet Joy Kills Sorrow represented the ever-growing youth movement in bluegrass with their frenetic musicality and whimsical songs like “Get Along.” Having seen them twice throughout the festival, I can safely say that this band has that extra something special that warrants the buzz that surrounds them.
The Claire Lynch Band delivered heartfelt tunes like “White Train” and their Civil War ballad “Dear Sister.” However, it was their closing medley of instrumentals that may have contained some of the most olden elements of Americana with its promised “Appalachian clogging, hambone and claw hammer banjo.”
Pennsylvania trio the Stray Birds continued the multi-instrumentalist, multi-vocal tour de force and paid homage to those who came before them with covers ofJimmie Rodgers’ “Blue Yodel No. 7” and Townes Van Zandt’s “Loretta,” as well their own touching tribute to the Stanley Brothers, “My Brother’s Hill.”
Sister quartet SHEL brought a vibrant energy to the room with their ethereal vocals and Celtic-infused instrumentation. “Lost at Sea” and “Freckles” drew loud appreciation from the crowd, but it was their cover of Led Zeppelin’s “The Battle of Evermore” that elicited the greatest response.
With such an array of divergent styles presented in these two showcases, as well as throughout the rest of the festival, it’s really beautiful and inspiring to see how many seats are available at the Americana table.
Posted by Will Hodge at 10:57 PM