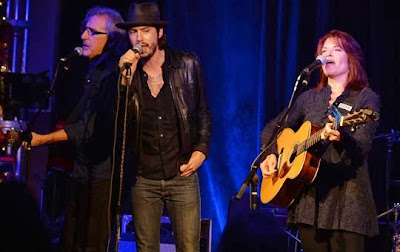 (This article was originally published onCMT Edge.)
There’s a bit of a terminology struggle when it comes to pinpointing exactly what makes Americana music what it is. Anyone seeking eclectic examples of this discussion had to look no further than the beautiful musical mosaic of Thursday night’s (Sept. 19) Americana Festival showcase at 3rd & Lindsley in Nashville.
There was a palpable anticipatory energy for the evening’s first artist, the illustriousRosanne Cash. Her next album, The River & the Thread, will be released early next year, and she surprised the enthusiastic crowd by performing the album in its entirety. While many of the songs were being played live for the very first time, Cash and her band (led by husband/collaborator/guitarist John Leventhal) sounded as if they had been touring behind these songs for years.
She described the album as being full of songs about the South, and each one sounded like it had been pulled straight from the fertile soil of the Mississippi Delta. The twangy Telecaster guitar of “A Feather’s Not a Bird” and “Money Road” and the commanding drums of “Modern Blue” and “World of Strange Design” combined to create a rootsy tapestry over her set, while the cinematic lullaby of “Night School” revealed there will be some unique moments sprinkled into the album, as well.
As a special guest, Cash invited Cory Chisel up to sing “50,000 Watts” and “When the Master Calls the Roll,” a beautifully fingerpicked Civil War ballad. After performing songs from the new album, she closed with a spirited run through “Seven Year Ache,” her No. 1 country hit from 1981.
Next up was legendary British folk-punk activist and human quote machine Billy Bragg. He introduced his opening number by remarking, “Let’s see if we can put some Woody Guthrie into the place” and launched into “Way Over Yonder in the Minor Key” from his first Mermaid Avenue collaboration album with Wilco. He also played through a variety of songs from this year’s Tooth & Nail, such as “Handyman Blues,” “Chasing Rainbows,” “Swallow My Pride,” “Goodbye, Goodbye” and “No One Knows Nothing No More,” dedicating it to “major label record companies.”
As Bragg dismissed his band for one song, he invited Cash back to the stage, and they sang a gorgeous cover of her father Johnny Cash’s 1958 hit, “I Still Miss Someone.” This moment combined so many things that I truly love about music, and it’s amazing how the Americana Festival showcases can create such one-of-a-kind moments like this.
Ever the salty English gentleman, Bragg sipped from a cup of tea throughout the night, and his non-musical moments were as memorable as his songs. He tongue-in-cheekily stated that “the Brits invented Americana” via Lonnie Donegan and skiffle and defined Americana as “country music for people who like the Smiths.” His hilarious between-song banter name-checked Morrissey, Johnny Marr, Kenny Rogers, Fidel Castro and Karl Marx. He even playfully retorted to an audience member’s request that they would also need to shout out “the key, the chords and the lyrics, as well.”
Richard Thompson followed with a blistering display of guitar mastery and lyrical finesse. With just his guitar and his voice, Thompson led the crowd through an emotional set of melancholy tunes and dynamic musicianship. Many of the songs came from his most recent Electric album, with a few gems from his back catalog thrown in for good measure. As he did on Electric, Thompson invited Siobhan Kennedy to add her angelic background vocals on a few of his “sad, miserable ones.”
Thompson’s jaw-dropping guitar skills were most bewitchingly brandished on songs like “Valerie” and “Persuasion,” but it was a fan favorite — “1952 Vincent Black Lightning” — that really whipped the crowd into an appreciative frenzy. Thompson has a combination of talents like few others.
To close the night, the Wood Brothers and Steep Canyon Rangers turned in impressive sets. The Wood Brothers played songs from their album The Muse, coming out Oct. 1, and their funky, jazzy, multi-genre mixture is certainly worth checking out.
Meanwhile, Steep Canyon Rangers’ new album Tell The Ones I Love debuted at No. 1 on Billboard’s bluegrass albums chart this week. These Dapper Dans had everyone dancing along to their dramatic bluegrass prowess, and their closing number can be described as nothing short of a fiddle apocalypse.
Posted by Will Hodge at 10:50 PM