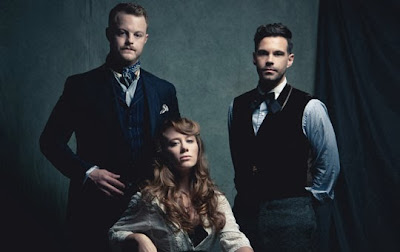 (This article was originally published on CMT Edge.)
As the Americana Music Festival rolled into Nashville for another year, its opening night of showcases did not disappoint. A stellar roster of artists played in venues all around town Wednesday night (Sept. 18) as music lovers flocked to see the talented acts and surprises that Mercy Lounge, Cannery Ballroom and the High Watt had to offer.
Leading the evening, “Brooklyn country music” darlings the Lone Bellow kicked things off in style to an eager, packed-out Mercy Lounge. The trio is known for powerhouse vocals, and they were certainly in fine form throughout their performance. It was awesome to hear so many conversations halt and see so many heads turn as soon as the band started singing.
Backed by a standup bass and drums, the Lone Bellow effortlessly swapped off instruments and impressively belted out their signature, emotionally rich songs for a solid set. The pulsing thump of “Green Eyes and a Heart of Gold” and the one-mic intimacy of “Two Sides of Lonely” seemed to garner the biggest audience response.
While frontman Zach Williams handles the majority of the lead vocal duties, he had no problem stepping aside to let bandmates Kanene Pipkin and Brian Elmquist take the spotlight on “You Don’t Love Me Like You Used To” and “Watch Over Us,” respectively. Being able to deliver the vocal intensity of punk singers while maintaining Eagles-esque harmonies makes the Lone Bellow a must-see in concert.
Nashville’s own Drew Holcomb and the Neighbors brought their folk-rock flavor to the High Watt, and the hometown audience received them with open arms. Of course, playing their geographical love letter “Tennessee” as their first song probably didn’t hurt those chances. Musically, they blend folksy acoustic strumming with swampy electric lines to form a Southern Springsteen sound that is propelled by the power of the rhythm section and just the right amount of tasty harmonica.
Their strengths showed the strongest on the bar-band slink of “Nothing but Trouble” and the slow-burn build of the explosive “A Place to Lay My Head.” While the crowd seemed sporadically familiar with the songs off of their most recent release Good Light, it was “Fire and Dynamite” from 2011’s Chasing Someday that immediately turned into an all-out sing-along.
Closing the night with a non-stop musical party like none other was the Midnight Windup put on by the Bluegrass Situation. This fun-filled, all-night jam session was hosted by actor-musician Ed Helms and featured a revolving cast of phenomenal guests including Larry Campbell, Jerry Douglas, the Infamous Stringdusters, Jim Lauderdale, Aoife O’Donovan and more. Also sprinkled throughout the star-studded performances were solo sets from the Milk Carton Kids, Joy Kills Sorrow, Steep Canyon Rangers, Della Mae and Black Prairie.
The fast-paced, loose-knit atmosphere was driven by the incredible amount of talent on the stage and by the unspoken language of musicians that is conveyed through mere head nods, eye contact and the act of stepping forward to solo and stepping back to let someone else take a turn. It was really something special to witness.
Some of the more memorable performances were Brian Wright and Aoife O’Donovan dueting on a tender cover of John Prine’s “Clay Pigeons,” Della Mae’s “Polk County” (featuring six consecutive fiddle solos by three spirited players) and Ed Helms joining Black Prairie for “How Mountain Girls Can Love” during an unforgettable night of music that went on well into the wee hours of the morning.
Posted by Will Hodge at 10:45 PM