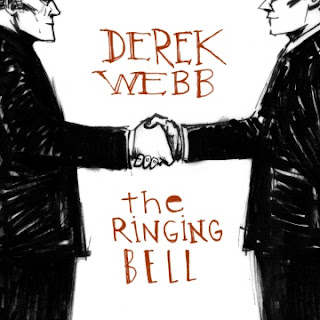 Word Association: Revolver, because that was the album we were basically trying to make.

Thoughts: This was my rock ‘n’ roll record about peace. So the little tiny things I had previously explored on songs like “My Enemies Are Men Like Me” and “Love Is Not Against The Law” with peace and war topics… it wasn’t the primary thing on Mockingbird and it became the primary thing on The Ringing Bell. There was much more to say about that, separate from just the general political stuff. I really wanted to talk specifically about peace and war. That record really focused on that.


Also, I pulled a few really old songs in on this record. Like, “Can’t Be Without You” was a song I had written for (Caedmon’s) Long Line of Leavers that we didn’t have time to record. I literally wrote it the same week I wrote “Mistake of My Life.” It was another song I wrote after I met Sandra, but before I moved to Nashville, when I was smitten with her but thinking I probably wasn’t going to get to be with her. I never really knew what to do with “Can’t Be With You” back then. So, not until I was ready to remake Revolver did I know how to produce it. But then once we had that sound going for The Ringing Bell, it worked perfectly.

Inspirations/Influences: That was the moment I had moved from The Beatles experimental records to their rock records and I binged on Revolver. When I’m making a record, if I’m trying to emulate something, I’ll make myself listen only to that so that my instincts are sharp. That way, when I hear something, the only thing I have to compare it to is the thing that I have been binging on. We just really wanted to remake Revolver (laughs). I can show you so many examples where we were literally emulating something specific… like all the vocals and the feel on “Name” are “And Your Bird Can Sing” and the electric guitar sound is obviously “Taxman.” It was an Epiphone plugged into a Vox AC30, brilliant channel, no pedals, with the volume just turned all the way up. We just ran it straight in and turned it all the way up. We were thinking, “what would The Beatles have done?” They didn’t have any of these crap pedals. It would've just been an Epiphone straight into a Vox, so that's what we did.

Production Notes: Again, this was more Cason and I, just the two of us focusing on it. This is our third record in a row now. So we had a real report at that point. We did it more like we did my second record. We got bass and drums done over at Smoakstack. Matt Pierson came back on bass and he just murdered it. I mean, he did Paul McCartney better than Paul McCartney. Listen to the bass part on “Name.” It is so insanely good. Will Sayles came back on drums. He played on all those records. After bass and drums, we brought it back to my house and did all the guitars, vocals, and everything else.

I remember with “A Love That's Stronger Than Our Fear,” I couldn’t get the right vocal take with my headphones on. So I ended up taking the headphones off and just cranking it through the studio speakers and recorded it in the room. So you can hear the cranked up track coming through the vocal mic while I’m singing it. I needed to feel like I had the band behind me to get the right energy. It needed to be crazy loud. Much to Shane Wilson’s chagrin, I tracked it with no phones and with the track cranked. I think you can hear it if you listen with headphones. Right before I sing the first words, you can hear this atmospheric swell that he then pulls back when I’m not singing, in between verses and stuff. You can hear the room come back on every time I sing.

That record was a blast.

Lest you think Derek was all subdued and serious during this politically-charged season, here's some behind-the-scenes shenanigans surrounding the tour for The Ringing Bell courtesy of a few video blogs Derek posted from the road:


Mixtape: Maybe “A Love That's Stronger Than Our Fear” because that’s got that real Beatlesy rock ‘n’ roll thing but it’s also in line content-wise with the rest of the record.


A variety of cool pre-order packages for I Was Wrong, I’m Sorry & I Love You (including immediate digital download) are available HERE.
Posted by Will Hodge at 7:37 AM