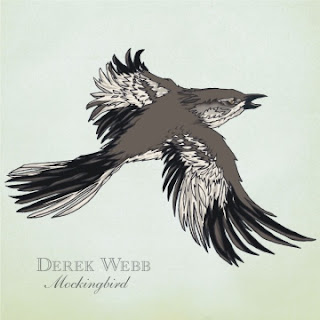 Thoughts: This was my second record with Cason and we were falling into a rhythm at this point. We decide to put narrow guardrails around the production on it. We decided on using six musical elements and nothing else. We said, whatever melody or rhythm you hear, it’s got to go on one of these six instruments. We’re going to make sure that if you hear any song out of context, you’ll know what record it came from because of the sound. We made those choices all up front.

That was also the record when I was coming awake politically a little bit. Much like my first record, it wasn’t about having huge revelations and insights and then telling everybody what my answers were. It was more about my questions. Specifically with how the church handles and deals with political issues. It was more me focusing in further. It was a time when the public, visible church was rearing her ugly head a little bit into that political conversation and I was bristling at it. I feel like I do my best work when I’m the most naive about something and I’ll ask questions that are maybe oversimplified. Maybe it’s not any more complicated than that at the end of the day. A song like “A King and a Kingdom,” is it more complicated than talking about primary allegiances and secondary allegiances? Probably so, but there‘s really a level where it really is that simple.

Inspirations/Influences: In terms of non-musical influences, I had just struck up a friendship with Jim Wallis who runs Sojourners. I was hearing what he was saying, not agreeing with all of it, but resonating with his questions. I was reading guys like John Yoder and Stan Hauerwas.

That was kind of the secondary stuff though. The primary focus was general politics; the way I was observing people in my immediate community mishandle their ideas about nationalism and politics. I was also getting into Martin Luther King and ideas of living at peace in the face of war. Our nation was starting to talk about preemptive war and about new policies coming down about how we’re going to deal with rogue states. Wendell Berry's words on a lot of that stuff was also really influential on me.

I was exploring the ideas of peace because I know myself to be such a violent person. I bypass sadness and go right to anger. That’s my go to. If I see injustice - which I see everywhere because of my personality - rather than throw my arms around it and weep with people, I jump in front of it with my fists up. Peace doesn’t come easy to me. My dad was a boxer and I’ve got that blood running through my veins.

(As a bonus, here's some more of Derek's thoughts on Mockingbird from freederekwebb.com, where he gave away the album in its entirity for free for a limited time in the fall of 2006:

i love music. i have grown up with music as a close confidant. and i believe in the power of music to move people. there’s something remarkable about the way a melody can soften someone to a new idea.

as an artist (and often an agitator), this is something i am keenly aware of. my most recent record ‘mockingbird’ deals with many sensitive issues including poverty, war, and the basic ethics by which we live and deal with others. but i found that music has been an exceptional means by which to get this potentially difficult conversation going. and this is certainly an important moment for dialogue amongst people who disagree about how to best love and take care of people, to get into the nuances of the issues.

one of the things that excites me most about the future of our business is how easy it is becoming to deliver music to people who want to hear it. i heard a story once about keith green caring so much that people were able to hear and engage with his music that he gave it away for free, which was a very difficult and expensive thing to do at that time. it’s actually never been as simple as it is today to connect music with music fans. and i want people to have a chance to listen to mockingbird and engage in the conversation.)

Production Notes: This was the first record I recorded in my house, but I didn’t have enough gear yet to really do it. With every record, I was taking a bit of the money I would normally spend on renting studio time and I put it into buying gear – a better mic, a better pre amp, a computer upgrade. At that point, we had just moved into this house and we didn’t have kids yet, so the upstairs was our studio.

That’s when Shane Wilson stepped in and I started working with him for awhile. Shane had mixed half of (Caedmon’s) Long Line of Leavers and is just a legendary mixing engineer. He’s a guy I never could’ve afforded but he reached out and wanted to help. I’ll pay him to mix an entire album for what most people pay him to mix one song. He’s that good and he’s that generous. He basically brought his studio to my house. He brought two huge racks, all his mics, and his entire rig to my house and set it up for two weeks. We literally had his techs on our front porch dismantling all his patch bays and taking all his rack gear out of these giant racks and taking them all upstairs and reassembling and rewiring them. It was an incredible amount of work.

Mark Polack played bass upstairs. Will Sayles was playing drums in our guest room. I was in our other guest room playing acoustic guitar and singing. Cason was downstairs at our piano. We were all on headphones and none of us could see each other. We tracked it live with no editing and then I would go back and double vocals. That was the sound I was looking for. I was listening to a lot of Elliot Smith and more of The Beatles and I loved that double vocal sound. We literally made that record in two weeks.

Mixtape: I feel like a song like “A King and A Kingdom” really represents that record well and functions as a thesis for the rest of it.

A variety of cool pre-order packages for I Was Wrong, I’m Sorry & I Love You (including immediate digital download) are available HERE.
Posted by Will Hodge at 7:22 AM