Webbtrospective #1: She Must and Shall Go Free - Derek Webb 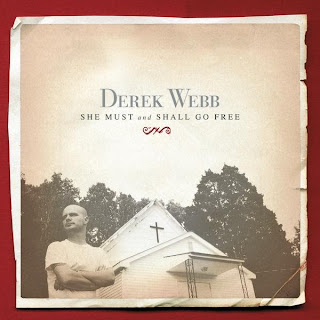 Word Association: Church… if we’re going to go one word.

Thoughts: That was an unlikely debut record. I was coming out of 10 years in a band and I wrote most of those songs thinking they were going to go on the next Caedmon’s Call record. I wasn’t envisioning a solo career when I was writing those songs. It’s kind of peculiar in that way from all of my other records. All of my other solo records were written as just my statements, my words, and not representing the ideas of seven people. But that was also the moment were, for the first time in my life, I was examining what my role in the church would be, what the church’s role in culture is, if any of those things are necessary and if so, what are they. The combination of those two things - it was highly topical and I was coming out of a band - made it unique in that way.

Inspirations/Influences: Playing in Caedmon’s for 10 years, we inevitably played in a lot of churches and we were around a lot of church culture. By the end of those 10 years, I was really ready to talk about some things that nobody was talking about. In fact, the first song I wrote for the record was “Wedding Dress” and it was sparked by having my feathers ruffled at a big Christian bookseller’s conference in Atlanta where I saw someone speak and say some things that I thought were absolutely outrageous. Knowing that he was speaking into and informing the beliefs of this whole culture because of how popular his book was just really set me off. “Wedding Dress” just came out of nowhere and it was like the gauntlet being thrown down. Nothing was the same after that. Once you write a song like that, it’s really hard to go back and write a song about you and your friend hanging out and having pancakes. Not that there’s not value in those songs too. But for me it was like, if this is possible, if I can speak like this, I should speak like this more. Also, I wouldn’t have been brave enough to write those songs if I wouldn’t have gotten married that same year. Those would’ve just been thoughts in my head. It was just that perfect moment – newly married, 10 years of experience and the crystallization of that moment seeing that man on that stage saying those things that were driving me crazy.

Also, during the recording of that previous Caedmon’s record, Long Line of Leavers, I was listening to a lot of country-folk type stuff. So I came to the band with a lot of those types of songs for that record, but the band didn’t really want to make a record like that. So they allowed one of the songs to stay as I had presented it and it was called “Love is Different.” But I had written almost all of the songs in that same style. This other song I had written for my grandmother called “Dance” got completely rearranged into some kind of weird Adult Contemporary Marc Cohn kind of nightmare – I mean, I love Marc Cohn, I don’t love to be Marc Cohn, I like him to be Marc Cohn – and I hate the recorded version of that song. I thought it divorced all the emotion from the song. Even when I play it now, if I ever do, I play it as I wrote it. So I think I still had that on the brain. Without having to consider six other opinions, I wanted to make a little country-folk record because that’s what I had in me at the time. Also, Sandra really got me deeper into Bob Dylan and decoded him in a way that I had never understood before. So that’s why songs like “Lover” got written, songs that had stanzas rather than verses and choruses. She also got me into Tom Waits and there’s a little of that influence on “Nothing (Without You)” in that big, trashy, percussive loop kind of sound.

Production Notes: That record was really collaborative, moreso than any other record of mine. That was the only solo record that I did in a more conventional recording way. With my new solo record deal – where you pay for the recording and turn it in finished - I was spending my own money to make it. I had to rethink things because I couldn’t afford to hire a producer and book studio time like I had experienced with Caedmon’s. So I produced it with a couple of friends of mine who I had hired on to be the band. Garrett Buell, one of my favorite drummers, came in and did all of the percussion. Matt Pierson played bass and secretly he’s a monster, so I wanted to get him in and let him off the leash that he’s usually on. Kenny Meeks was the guitar player and he’s a legit blues/Americana guitar player. Everybody had a hand in it.

This is my only record that had none of my own DIY element. With every album from that point forward, starting small and getting bigger, I had a hand in recording it myself. The experience of recording that one was really different.

Also, I wasn’t ready to have a singular vision yet. I was coming from a band where I was trained to write the songs and set them free and I was one of seven that had a vote. Once the songs were written, it was a democracy. If you would’ve put me in a studio by myself to make that record, I couldn’t have done it.

Mixtape: “Wedding Dress” - This isn’t necessarily my favorite song on the record but it’s easily the song that has been the most connective with people. That’s the one song of mine that people tend to know. It’s confessional, it’s first person, but it’s also got a strong critique in it. It’s a risky song. I think it represents a lot about my ethic that I hadn’t even identified yet. When I do what I do best, it’s what I’m doing in that song.

A variety of cool pre-order packages for I Was Wrong, I’m Sorry & I Love You (including immediate digital download) are available HERE.
Posted by Will Hodge at 11:44 PM