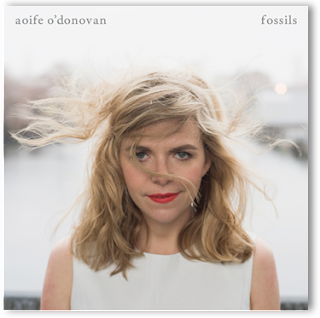 (Here's my most recent article for CMT Edge.)


The old adage that you never get a second chance to make a good first impression is never truer than in the context of an artist’s inaugural album. In the case of Aoife O’Donovan’s sophisticated solo debut album, Fossils, it’s clear no second chances will be needed.
While she has already tasted success with a wide variety of collaborations, guest spots and songwriting cuts, Fossils proves the talented singer-songwriter is more than just a strong link in the chain of other artists. With the help of producer Tucker Martine (My Morning Jacket, the Decemberists), she has crafted her own strong collection of stirring, soulful stories and relaxed, rootsy rockers.
CMT Edge spoke with Aoife (her common Irish name is pronounced “ee-fah”) about going solo, Martine’s influence and the night she performed Bruce Springsteen’s Nebraska in its entirety.
CMT Edge: First off, congratulations on Fossils being named as one of the summer’s “must-hear albums” by Rolling Stone.
O’Donovan: Yeah, I’m pretty honored that Rolling Stone picked it. It’s pretty bizarre! However, they did misspell my name. (laughs) You can’t win them all!
Between being in the bands Crooked Still and Sometymes Why and your slew of guest appearances, you’re no stranger to the recording process. This time around, though, was it a different experience recording your own album?
Absolutely. Being part of a band or being a guest artist on an album is a very different thing than making your own album. It’s knowing at the end of the day that the final decision is pretty much up to just you and the producer. It was such an incredible experience getting to go into the studio and record 10 of my original songs. I was incredibly pleased with the results.
What exactly was it that drew you to choosing Tucker Martine as producer?
I first heard Tucker’s production on Sarah Siskind’s album Covered that came out about 10 years ago. I was totally blown away by the sounds that he got and the way that her voice fit into the mix in this way that I hadn’t really heard before, especially on singer-songwriter records.
Then, a friend of mine in Nashville gave me a Laura Veirs record, and that was a game-changer for me. It was Year of Meteors, and I love that album. Again, Tucker’s production.
When I first heard Abigail Washburn’s album City of Refuge, I listened to it on repeat for three days straight. Tucker has this ability to draw a singer and the song out of where you think it’s going to go and point it into a new place.
The opening track on Fossils is “Lay My Burden Down,” a song of yours that was recorded by Alison Krauss. Can you describe the good fortune of having your song interpreted by a legend and then also getting to record your own version?
When I found out that Alison was going to record that song, I just had to pinch myself daily for a while. (laughs) I feel like for many people — and even for me — her version will be the definitive version of the song. It’s so beautiful and so plaintive, and she sings it so well.
When I decided to record it on my own album, it was kind of at Tucker’s insistence. I was thinking, “Alison already did it, and how could I ever top that?” He said, “We’re not going to try and top it. We’re just going to fit it into this record.” It’s a song that means a lot to me, and so we found a little bit of a different angle for our version of the tune. I think we took it into a little bit more of a happier place. Plus, that baritone electric guitar solo is one of my favorite moments on the album.
You’ve been a guest on albums by Noam Pikelny and Sara Watkins, as well as The Goat Rodeo Sessions with Stuart Duncan, Edgar Meyer, Yo-Yo Ma and Chris Thile. How does it feel to be on the other end and have folks like Dave Douglas and Sam Amidon guesting on your album?
It feels like it makes total sense. (laughs) I got to make a record with Dave Douglas last year, and it just seems so fitting that he would get to contribute his beautiful horn playing on “Thursday’s Child.”
Sam Amidon is a really old friend of mine. I’ve known him for over a decade, but we’ve never really worked together formally. He happened to randomly be in Portland at the time we were recording, and I thought, “We should get Sam in here to sing on ‘Briar Rose.’” It was really last minute, and I love those little things that really make an album special.
I first came in contact with your solo work a couple of years ago when you covered Bruce Springsteen’s Nebraska album during one of your Monday night residency shows at Rockwood Music Hall in New York City. As it’s one of my all-time favorite albums, I’m curious what impactNebraska had on you and how you came about choosing to cover it in its entirety?
I never went through a Bruce Springsteen phase, but I did grow up listening to a lot of folk music. Somewhere down the line, I got a copy of Nebraska and sat down and listened to it all the way through and really took in the lyrics. I was like, “This is it.” The character-driven song is hard to do well, but Bruce Springsteen is the ultimate at it.
I decided to cover the whole record when I was doing the residency, and I was thinking of things to do that would be cool. I learned all the songs on guitar and did the album from start to finish in jeans and a white T-shirt while drinking a Budweiser. It was a really fun night!
Posted by Will Hodge at 10:32 PM