While most album reissues are content to showcase a band within the context of just one individual component of their overall catalog, some really go the extra mile to capture a true sonic snapshot of their “before and after” phases as well. Such is the case with the monster 7-disc vinyl edition of LSXX, the 20th anniversary reissue of Last Splash from The Breeders (also available in a 3-disc CD version). You may remember Last Splash as the album that spawned “Cannonball,” one of the quirkiest radio hits of 1993. However, LSXX does an unbelievable job of showing just how many more creative layers there are to The Breeders.

But before we unpack all of the awesomeness awaiting your ears in the LSXX box, humor me through a quick Breeders refresher. There’s no question that The Breeders are cut from some serious alternative, post-punk cloth. The band was originally formed when Pixies bassist Kim Deal and Throwing Muses guitarist/co-vocalist Tanya Donnelly were on tour together in Europe in the late 1980s. Deal and Donnelly recorded a demo and got signed to 4AD, the independent label of both of their respective “other” bands. Their Steve Albini-produced debut album, Pod, was released in 1990. While the critics gave it pretty lukewarm reviews, it garnered a strong following on college radio and was mentioned as a highly influential album by the patron saint of alternative music himself, Kurt Cobain. After Pod was released, Deal and Donnelly went back to their previous projects – Deal recording Bossanova and Trompe Le Monde with Pixies and Donnelly starting to form what would eventually become the band Belly. As Pixies started slowing down, Belly started picking up and Deal recruited her twin sister Kelley to take over on guitar. After opening for Nirvana’s 1992 European tour, The Breeders went in to the studio to cut their second album, Last Splash.

Which brings us back to LSXX. Here’s exactly what’s covered in the beautifully sprawling 7-disc, 46 bonus track, all-inclusive gem of a vinyl box set.

Last Splash (12” LP) – The original 15-track album that went Platinum and spawned hit singles “Cannonball,” “Divine Hammer” and “Saints.” You may also recognize a snippet of the original guitar line from “S.O.S.” as the source of Prodigy’s “Firestarter” sample from a few years later.

The Stockholm Syndrome (12” LP) – This live concert album was recorded in Sweden in 1994 on the band’s final European tour. While some of the tracks originally appeared on a fan club release, this is the first time the entire concert has been available in full. Standouts include a frantic “Head to Toe” and their killer covers of Guided By Voices’ “Shocker in Gloomtown” and The Beatles’ “Happiness is a Warm Gun” from Pod.
Demos, Rare Tracks and Sessions (12” LP) – Compiling The Breeders impressive 4-track BBC Session, a handful of pre-Last Splash demos from 1992 and a couple of compilation-only songs, this LP is the true hidden gem of the whole bunch. Their live version of “Iris” from the No Alternative compilation is super cool to have but the crowning jewel of this disc is “Grunggae,” the embryonic demo version of “Cannonball.”

Safari (10” EP) – This EP is super special as it is the only Breeders release to include contributions from both Tanya Donnelly and her replacement, Kelley Deal. It predates Last Splash by a little over a year and it’s a really cool transitional piece in the catalog. All 4 songs are exclusive to this EP, including their driving cover of The Who’s “So Sad About Us.”

Cannonball (10” EP) – No matter if you consider it an EP or a single, this release celebrates what would become The Breeders’ biggest hit and most well-known song. It was released a couple of weeks before Last Splash and features “Cannonball,” “Cro-Aloha” (a demo version of Last Splash’s “No Aloha”), “900” and an early-70s Aerosmith cover “Lord of the Thighs.”

Divine Hammer (10” EP) – Released as the proper single for “Divine Hammer,” it contains the exclusive, single version of the title track, b-side “Hoverin’,” an acoustic cover of Hank Williams’ “I Can’t Help It (If I’m Still In Love With You)” and an alternate version of “Do You Love Me Now?” featuring J Mascis (Dinosaur Jr.) on backing vocals.

Head to Toe (10” EP) – This J Mascis-produced EP came out almost a year after Last Splash was first released and features the first solo writing credit of Breeders’ bassist Josephine Wiggs in the wonderfully thrashy “Head to Toe.” They also continue the tradition of tasty cover songs on their EPs with “Freed Pig” from Sebadoh and “Shocker in Gloomtown by Guided by Voices. “Saints,” the third single from Last Splash, is included as well.

Also included among the three 12” LPs and four 10” EPs is an enthralling 24-page booklet that contains some amazing pictures and stories from the band members, as well as recollections from such luminaries as Kim Gordon and J Mascis. Not only will you feel like you were right there in the studio as Last Splash was being recorded, but you'll also get to learn a couple of cool, completely random nuggets along the way: that sound at the beginning of “S.O.S.” is Kelley’s sewing machine run through a Marshall amp, Kim’s wardrobe for the “Cannonball” video was inspired by Mick Jagger’s character in the 1968 film Performance, the vinyl color for the “Head to Toe” EP was inspired by a cheap toothbrush found in a rundown drugstore, and on and on.

As far as reissues go, you won’t find many that can match what LSXX has to offer - a fantastic album, an exciting concert, a wide variety of additional b-sides and covers, and an interesting booklet of pictures and stories accompanying the whole thing. While I don’t think you have to be a devotee of the 90s to enjoy LSXX, it will certainly transport you back to the time when Last Splash was hitting the radio and “Cannonball” was all over MTV. All the components of LSXX seamlessly work together to capture the unique essence and spirit of The Breeders - a band doing their own thing, on their own terms, for everyone else to enjoy and take part in. 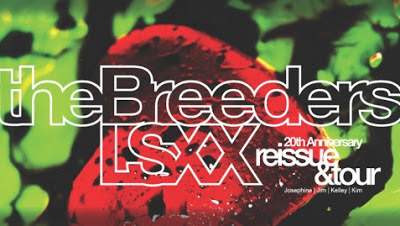 You can officially pick up LSXX on May 14th and you can find out where to catch The Breeders out on the road for the LSXX tour HERE.
Posted by Will Hodge at 9:08 PM