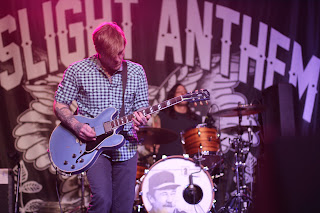 One of the trademarks of a truly great band – you know, the kind who routinely get tagged with qualifiers like quintessential and legendary – is their ability to perfectly straddle the line between road-tested professionalism and reckless abandon. For The Gaslight Anthem’s much-anticipated return to Nashville, they effortlessly played the part of the luxury railroad car threatening to jump the tracks at any moment. Blending the bravado of punk, the drama of rock and the velvety cool of soul music, Brian Fallon and the boys had a packed out Marathon Music Works dancing elbow to elbow and singing along to every lyric at the top of their lungs. For a band like The Gaslight Anthem, fans don't just like them, they believe in them and a concert isn't just a show, it's a rock & roll rite of passage. While that all may sound a bit hyperbolic, it's none the less true. While fellow Garden Staters Bon Jovi were playing across town on the very same night, The Gaslight Anthem proved that New Jersey's finest had set up shop here. 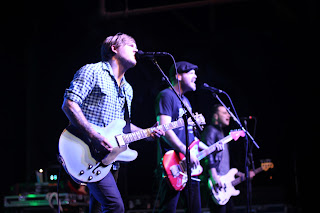 There's a certain irreverently reverential air to Gaslight Anthem shows. They mix time-honored traditions - influential walk-on music (The Replacement's "Can't Hardly Wait" for this tour) crashing into the opening number and always closing out the main set with "The Backseat" - with surprises like an ever-changing setlist that features obscure numbers and rarely played gems scattered throughout the mainstays. Even though Gaslight rose up through the punk rock ranks, each successive album has showcased a more nuanced and layered side to the band's repertoire. With four full-length records and a handful of EPs and singles to choose songs from, their concerts have become a diverse sonic stretch through punk anthems, emotive ballads, huge rock chorus, quiet hymns, gritty blues and a rich amalgam of genres that can only be described as "the Gaslight sound." 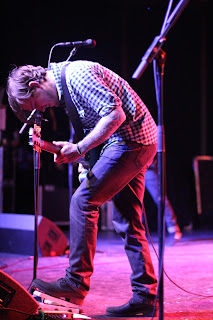 Wednesday's night show featured a setlist that was heavy on their smash sophomore release The '59 Sound and their most recent record Handwritten, recorded here in Nashville last year. They opened the show with the explosive "Howl" and the crowd kept in step with every word Brian sang, threatening at many moments to even overpower him. Up for the challenge, the band then launched into a trio of tracks from The '59 Sound, arguably their best loved record to date. After a spirited tromp through the pounding "45," they dipped back into their debut, Sink or Swim, for Brian's love letter to The Clash, "I'da Called You Woody, Joe." The next two songs they played is a great example of their love for throwing the occasional curveball into the mix. "Our Father's Sons" is a song that can only be found on their iTunes Session digital EP and "Blue Dahlia" is a bonus track that's only on the deluxe edition of Handwritten. However, with how the crowd continued to singalong without missing a step, you would've thought these were some of their most successful singles. They continued this successful pattern of album-specific chunks broken up by random beloveds and by the time they launched into  "The Backseat," the crowd was not ready to let them call it a night. They came back out for an encore of 4 more fan favorites and as Brian bid the crowd "good night" and charged into "Great Expectations," the crowd erupted like it was the last song they'd ever sing. With the band truly firing on all cylinders and continuing to crank out some of the best music the genre has to offer, thankfully it doesn't appear that'll be happening any time soon. 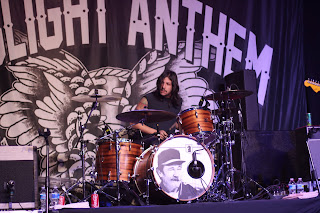 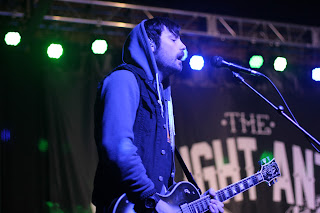 - The Queen of Lower Chelsea
- Wooderson
- Meet Me By The River’s Edge
- Here Comes My Man
- The ’59 Sound
- Here’s Looking At You, Kid
- The Backseat
--Encore--
- American Slang
- The Patient Ferris Wheel
- Mae
- Great Expectations 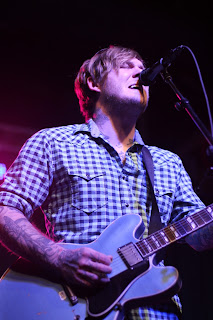 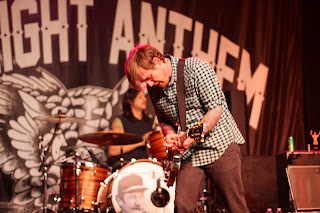 Posted by Will Hodge at 9:10 PM No comments: 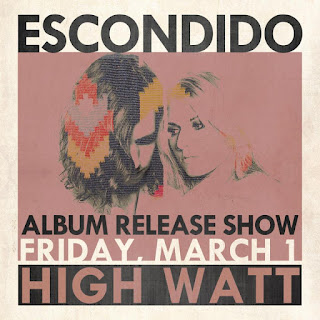 On an unusually snowy Friday night in Nashville, Escondido continually wowed and wooed an enthusiastic crowd for one of the best nights of music I've ever experienced in this fair city.

Celebrating the release of their new debut album The Ghost of Escondido, Jessica Maros and Tyler James used the opportunity to prove that your first album doesn't have to sound like a first album. Backed by an incredible 4-piece band, Jessica and Tyler impressively recreated the incredible sonic atmosphere of The Ghost of Escondido, while still adding a few minor tweaks here and there to make their live show a truly unique experience. In a time when a plethora of studio trickery can propel a band past their talents (or lack thereof), it's so refreshing and enjoyable to hear a band that is so authentically gifted and musically creative.

Escondido played the entirety of The Ghost of Escondido and they even threw in a few special surprises at the end of the set. They opened with "Evil Girls" and as soon as Jessica started singing, my ears were mesmerized by the smokey tone of her vocals. Tyler's spaghetti western trumpet lines really set the "desert starry night" ambiance perfectly as well. As they nailed one song after the other, it was really cool to watch the duo having fun and enjoying the crowd. Jessica's Stevie Nicks meets June Carter Cash stage persona and Tyler's mile-wide smile showed just how much fun they were having playing together. While every single song was spot on, highlights of the initial set included the bluesy drive of "Bad Without You," the ghostly sway of "Willow Tree," the cinematic trumpet of "Rodeo Queen," and the singalong chorus of "Cold October."

Once Escondido finished playing through The Ghost of Escondido, they played a trio of spectacular non-album songs that showed they've got even more incredible music up their sleeves for their next album. First up was a jaw-dropping cover of Chris Isaak's "Wicked Game" that was as smolderingly amazing as, or possibly even a smidge better than (blasphemy!), the original. They then played two brand new songs that are already slated for their next album. First up was slow-build burner "Midnight Train" featuring Tyler playing some tasty keys and then the rocking swagger of "Uh-Huh" to close things out. Never have I been to a debut album release show where such a brand new band was so successful at recreating the sonic oomph of the album (much less surpassing it) as Escondido was able to last night. Forget any "they sound like x" comparisons, Escondido is already a standalone act that can more than back it up in a live setting.

Also, in case you want more Escondido (and who doesn't?), here's an interview I did with them for CMT Edge last week:
http://www.cmtedge.com/2013/02/20/discover-beautiful-escondido/
Posted by Will Hodge at 3:22 PM 1 comment: 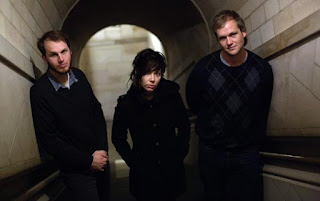