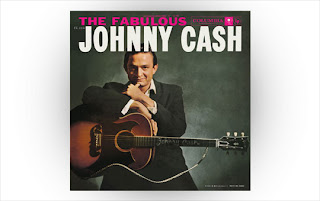 (I wrote this Record Store Day piece for CMT Edge to highlight some of the best country/folk/roots music offerings from this year's event.)
If the term “Black Friday” conjures up scary images of early morning shopping and rowdy, turkey-fueled crowds, then the fine folks organizing Record Store Day would like to change that.
Their third annual Black Friday event returns this week with some super cool, limited edition vinyl, CD, DVD and boxed set releases available only at your local record store. The vast majority of these stunning releases are exclusive to this event, while a few items will just be making their debut. For music lovers and vinyl enthusiasts alike, Christmas is coming early this year.
Fans of Americana and classic country would do well to check out the following special releases on Friday (Nov. 23):
Johnny Cash, The Fabulous Johnny Cash: This 12-inch, 180-gram vinyl full-length album is a mono reissue of Cash’s third album, which was originally released in 1959. Containing classic Cash-penned songs like “Don’t Take Your Guns to Town” and “I Still Miss Someone,” this record is an interesting sonic snapshot of Cash’s post-Sun Records sound.
Gene Clark, “Echoes”: This seven-inch vinyl single from the founding Byrds member is a reproduction of his 1966 promotional single for Columbia Records. Featuring Clark’s first solo single “Echoes” on the A-side and “I Found You” on the B-side, this release also showcases the extremely rare promotional picture sleeve from the original.
Merle Haggard, Capitol Rarities: This 10-inch vinyl EP houses six of Haggard’s Capitol-era rarities culled from recording sessions in 1966. Side one features three unreleased tracks (“I Threw Away the Rose,” “I’m a Lonesome Fugitive” and “Loneliness Is Eating Me Alive”) recorded in Nashville in March of 1966. Side two features three unreleased tracks (“Someone Told My Story,” “Hang Up My Gloves” and another version of “I Threw Away the Rose”) recorded in Hollywood in June 1966.
Wanda Jackson, Capitol Rarities: The 10-inch vinyl EP from the queen of rockabilly spotlights six of Jackson’s Capitol-era outtakes and alternate cuts from recording sessions in the ’50s and ’60s. The first side includes three unissued tracks (“Step by Step,” “In the Middle of a Heartache” and “The Wrong Kind of Girl”) from 1956-1960, while side two features three unissued tracks (“I Cried Again,” “Before I Lose My Mind” and “To Tell You the Truth”) from 1961-1962.
George Jones, United Artists Rarities: Six of Jones’ United Artists-era rarities from various recording sessions in 1960s are collected on the 10-inch vinyl EP, including two of his marvelous duets with Melba Montgomery. Side one highlights three unreleased recordings (“Let’s Go Home,” “I Saw Me” and “Will There Ever Be Another”) from 1962-1964. The flip side features three unreleased tracks (“Is This How a Broken Heart Dies,” “Wouldn’t It Be Something” and “Alabama”) from 1963-1964.
The Lumineers, Winter: Another 10-inch vinyl EP, this one contains four songs not found on the Lumineers’ self-titled debut smash, including their uniquely stripped down cover of “This Must Be the Place (Naïve Melody)” by Talking Heads. New tracks also include “Ain’t Nobody’s Problem,” “Elouise” and “Darlene.”
Buddy Miller and Jim Lauderdale, Buddy and Jim: The debut collaborative project from two of Americana’s most revered statesmen will be available at local record stores two weeks before it hits shelves everywhere else. Available on CD and as a 12-inch vinyl LP, the album is led by the twangy first single, “I Lost My Job of Loving You.”

My Morning Jacket, “It Makes No Difference” (featuring Brittany Howard): This 10-inch vinyl single is pressed on sweet orange wax and features My Morning Jacket covering The Band’s “It Makes No Difference” with a little vocal help from powerhouse Brittany Howard of Alabama Shakes. The B-side is a previously unreleased My Morning Jacket song called “Grab a Body.”
Buck Owens, Buck Sings Eagles: The 10-inch vinyl EP of unissued Owens recordings from the ’70s has the legend covering four different songs by the Eagles, who had not yet reached iconic status in the music world. Originally recorded to air on Hee Haw, the collection houses Owens’ take on “Take It Easy,” “Peaceful Easy Feeling,” “Lyin’ Eyes” and “Tequila Sunrise.”
Lucinda Williams, “That Time of Night”: This 10-inch vinyl single showcases alt-country songstress Lucinda Williams covering Michael Chapman’s “That Time of Night” on the A-side, with Chapman’s original recording appearing on the B-side.
Find a list of participating record stores and browse all of the Black Friday offerings.
Posted by Will Hodge at 10:22 PM