My Part-Time Cover: "One More Try" 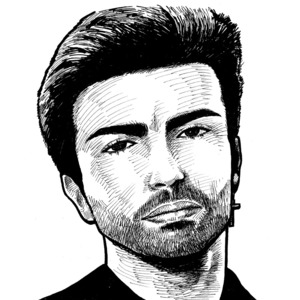 Rarely does an artist step away from an already successful duo career and make an even bigger splash as a solo act. In the mid-80s, George Michael decided to step out of his half of the Wham! spotlight to try his hand at a solo career. Man, did it pay off big time. While still in Wham!, his first solo activity was the monster single “Careless Whisper,”  which quickly went to #1. A couple of years later, he released his debut full length solo album, Faith, and with six Top 5 singles, it ended up being one of the biggest albums of the late 80s. Trading in the day-glo bike shirts and bubblegum pop tracks for a more mature, tougher look and smarter, cleverly crafted songwriting, George Michael showed he was serious about being taken seriously by writing all of the songs (besides one co-write), playing the majority of the instrumentation and producing the album himself. Thanks in part to the cultural impact of MTV, the aesthetics of the videos from Faith may be the first thing that comes to mind. But make no mistake about it, the album was full of really amazing songwriting and George’s unmistakably flawless vocals. Just take another listen to “One More Try” and you’ll see what I mean. Released as a single almost a year after the album’s initial release, “One More Try” is a fantastically soulful ballad that reminds you just how talented his musical output was back in the 80s. At almost 6 minutes in length, it had to be good to be played on the radio so much in the days of three and half minute pop songs.


Iron & Wine were part of last year’s “Undercover” series by the A.V. Club, but how their particular session came about is quite an amazing story. Initially, Sam Beam was supposed to cover “Islands in the Stream” with a special mystery guest duet partner. Well, at the last minute the mystery guest didn’t show up. Instead of making Sam pick another song from the list, they let him choose whatever cover he wanted to do. He picked George Michael’s “One More Try” and the results are nothing short of astounding. I first fell in love with Sam’s voice when I heard “Upward over the Mountain” from 2002’s The Creek Drank the Cradle and he shines even more whenever he gets into these quiet, soulful tunes. If you pay close attention to the video, you’ll see that his back-up singers are no less than the fantastic Rosie Thomas and Marketa Irglova (The Swell Season). Sam ended up releasing this cover as a small-run, three-color 7” single on Suicide Squeeze records earlier this summer and I lucked out by getting a sweet yellow copy from Grimey’s on release day. The B-side is another cool cover, Sam’s take on Little Feat’s “Trouble.” A great song sounds great in any format and I think this covers speaks to the incredible talents of both George Michael and Sam Beam. Take a listen and you’ll see what I mean!

I snapped a pic of the sweet yellow wax for all my fellow vinyl fiends: 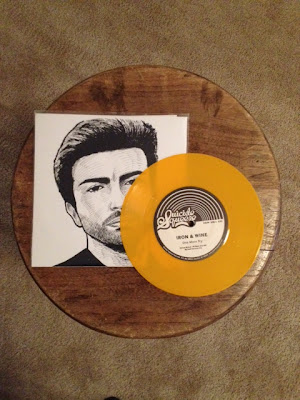