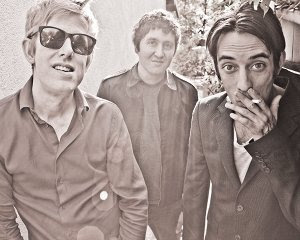 It's always a cool thing to get to experience the first sonic snippets of a new band. Divine Fits is a new project featuring Britt Daniel (Spoon), Dan Boeckner (Wolf Parade) and Sam Brown (New Bomb Turks) and they just a released a cool 45 second teaser video soundtracked by a tinkling synth, sampled vocals and a catchy electropop beat. Pretty interesting tidbit indeed. It's certainly intriguing enough to have me looking forward to hearing more from them. While there's not a whole lot of info from their camp yet, we do know their debut album (as yet untitled) was produced by Nick Launay and it will be released on Merge Records later this year. You can keep your eyes and ears out for Divine Fits at the following places: