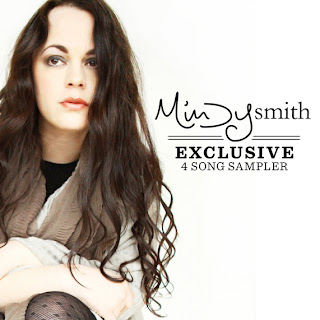 
When people talk about pure voices, it’s usually in regards to some of the legendary songbirds from decades gone by. You know, musical mythics like Billie Holiday, Ella Fitzgerald, Patsy Cline, Nina Simone and Karen Carpenter. Those angelic ladies whose voices have that singular heaven-sent tone that mixes talent, power, fragility and awe. Like a hurricane wrapped in velvet, they can soothe you and destroy you in equal measure. While that recognition sadly comes too late for some, there’s no doubt that Mindy Smith belongs on the pure voice list right now and actually has been for some time. Introducing herself back in the early 2000s with the one-two punch of stellar alt-country hit “Come To Jesus” and a jaw-dropping cover of Dolly Parton’s “Jolene,” Mindy cannonballed into the country music pool and made an unbelievable splash that’s still generating ripples. She’s released three incredibly strong full length albums, guested on albums by Olivia Newton-John and Dolly Parton, appeared on a variety of compilations and also created a cozy Christmas record that just keeps getting better with each holiday season. She’s currently readying her first independent album, Mindy Smith, for a June 26 release on Giant/TVX Records and fans are lucky enough to get two new cuts (along with two other great tracks from her previous albums) exclusively on her stunning new NoiseTrade sampler.
“Don’t Mind Me” and “If I” are beautiful sneak peeks into the vibe that awaits on Mindy Smith and also into the rootsy, jazzy, bluesy world of Mindy’s entire catalog. “Don’t Mind Me” is a saucy full band barroom number that slinks along on some tasty electric guitar work and Mindy’s confident, assured vocals. On the flip side, “If I” is a gentle acoustic ballad that showcases Mindy’s vulnerable high and lonesome register that signature stamps so much of her work. It’s these quite musical moments that truly seal her place in the pure voice pantheon. These two new tracks perfectly illustrate the unique heartbreaker/heartbroken dichotomy that threads through all of Mindy’s songs and exemplifies what is so special about her creative output. The other two tracks on the sampler are the fantastic “Come To Jesus” from her debut album One Moment More and the bouncy “Highs and Lows” from her most recent release, Stupid Love. I encourage everyone to download this great sampler. Even if you’re already a fan, the two new songs are awesome preemptive gifts from the upcoming album. If you’re not familiar with Mindy’s work, this sampler is a beautiful introduction, but I strongly encourage you to not stop there. Some folks are singles artists and some folks are album artists. You will not be disappointed if, nay when, you pick up her other albums. If you do it in separate pieces, just go the chronological route and start at the beginning with One Moment More, then pick up Long Island Shores and then put a bow on things with Stupid Love. That way you can not only exposure yourself to a flurry of incredible music, but you’ll be well versed and totally prepared for Mindy’s new release on June 26. I promise that Mindy’s pure voice will translate to pure enjoyment for you each time you listen
Mindy Smith will be released June 26 via Giant Leap/TVX Records.
Posted by Will Hodge at 6:58 PM