One Man, Many Bands - Ethan Luck 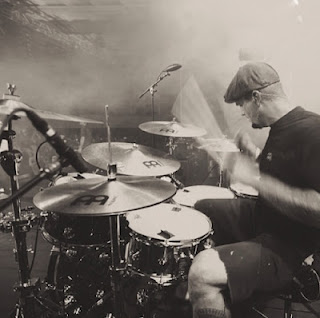 (This is the third installment in my One Man, Many Bands feature. You can check out the ones I did on Aaron Sprinkle and Mike Herrera as well.)

When I first had the idea for the “One Man, Many Bands” concept, Ethan Luck was in the first batch of guys that came to mind. You could easily toss out Kevin Bacon and play a “Six Degrees of Ethan Luck” game with just about any band from the Christian punk/alternative music scene of the 90’s to now and he’s still adding degrees as we speak…type…whatever. Currently, his main gig is drumming for Relient K, but he has contributed guitar, lap steel, bass, drums, engineering/production work and even vocals for an insane amount of bands that he was either a member of or just friends with. I’m not sure even Ethan could draw out his “band family tree” perfectly, so I’ll do my best to just hit some of the main ones.
The Dingees – Although Ethan was in a few bands before The Dingees (including early incarnations of The O.C. Supertones and Pax 217), this was my first introduction to him. During the third wave ska craze of the mid to late 90’s, there were very few bands that nodded back to the 2 Tone and traditional ska that came before them. The Dingees could bring the punk flare when necessary, but their use of dub rhythms, horns and organ gave them that standout edge. Ethan’s drumming ability allowed them to play within different genres fluidly and I think that gave them something different from other bands of the era. Along with Rancid, MxPx and Dropkick Murphys, The Dingees were one of my “go-to” bands when I wanted to show my fellow classmates what awesome punk/ska music could sound like. After seeing The Dingees a few times in concert and them recording an awesome Christmas song (a sure-fire way to reach my musical heart), I was hooked.
"Could Be Worse" - The Dingees (Armageddon Massive)
The O.C. Supertones – Between great albums and incredible live shows, The Supertones were an incredibly big part of my high school years. I straight wore out Adventures of the O.C. Supertones and Supertones Strike Back and I got my first “concert concussion” at a MxPx/Supertones/SpudGun show in 1997. So, when Ethan joined up with them on guitar in 2000, it was an exciting fit for me. Ethan’s first album with them was 2000’s Loud and Clear and he played all the way through to 2005’s Faith of a Child, appearing on six albums in all. Just like with The Dingees, Ethan’s ability to effectively play within different genres allowed The Supertones the opportunity to mess around with ska, punk, rap, soul and rock. I got to see Ethan play with The Supertones on a few different occasions, with the best one being Bleach’s (not exactly) final show in 2004 in Nashville.
"We Shall Overcome" - The O.C. Supertones (Revenge of The O.C. Supertones)

Demon Hunter – After The O.C. Supertones called it quits in 2005, Ethan joined Demon Hunter in time for their third album, The Triptych. Employing his guitar talents in a distinctly separate realm from any of his previous bands, Ethan’s playing in Demon Hunter really showed off his well-rounded musical abilities and his creative spirit. Ethan only played on The Triptych and Storm the Gates of Hell, but the few years he spent in Demon Hunter definitely added some new sounds and tricks to his musical repertoire. I’ve always loved Ethan’s tone on their cover of Prong’s “Snap Your Fingers, Snap Your Neck.”


My Red Hot Nightmare – As I’ve written on here before, this is my personal high point of Ethan’s illustrious career. My Red Hot Nightmare was a side project consisting of only Ethan and former-Supertones bandmate Dan Spencer. It was Ethan’s first time fronting a band and I was insanely excited when I heard their first recordings on the My Other Band, Vol. 1 album. They got the first three cuts on the compilation and after I heard them I was ready to become their fan club president. Unfortunately, nothing more ever materialized from them apart from a cover of Superdrag’s “I Can’t Wait” from 2006’s A Tribute to Superdrag. Nevertheless, I still smile when I spin their four fantastic songs and I pour a forty out to what might’ve been…
"The Worst In Me" - My Red Hot Nightmare (My Other Band, Volume One)

Relient K – In 2008, Ethan was chosen to take over on drums for Relient K’s departing stickman Dave Douglas. I was stoked because just like when he joined The Supertones, I was already a fan of both him and the band. He contributed to some of Relient K’s Christmas album, Let It Snow Baby…Let It Reindeer, and their compilation album, The Bird and The B-Sides, but 2009’s Forget and Not Slow Down was his first full album as a member. As Relient K has continually expanded their sound over the years, I think Ethan is a great fit and more than able to handle anything they could throw at him. Here is Ethan’s only Relient K song on lead vocals:
"No Reaction" - Relient K (The Bird and The Bee Sides)
Posted by Will Hodge at 6:05 AM