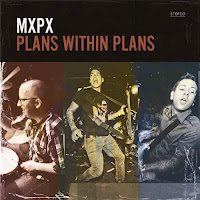 Loud. Fast. Heart. This formula has served MxPx well over the last 20 years and with their newest album, Plans Within Plans, they've once again proven that they've down right mastered it. With 13 tracks clocking in at just over 35 minutes, the boys from Bremerton have created another classic no holds barred, no note wasted punk rock record. Since the early 90's, MxPx has flirted with a variety of different moods within the punk vein, but I caution anyone to lazily use terms like "old school" or "return to form" when describing the ferocity of Plans Within Plans. While it's true that MxPx has always had one foot firmly planted on the shoulders of those who've rocked before them, they've continually been a forward-facing locomotive of powerful music and honest lyrics. There's no question that lead singer/bassist/principal songwriter Mike Herrera seems to be an unending source of songs, as he masterfully splits his notebook between MxPx, Tumbledown, Arthur and solo endeavors. (I know, I know fanboys, don't forget The Cooties!) But what's even more amazing than the sheer volume of his writing, is the quality and direction that each song takes. None of the songs on Plans Within Plans sound like anything other than MxPx songs. Granted the signatures sounds of Tom's Les Paul growl and Yuri's bombastic drumming help seal the deal, but at the core of any great band is their songs. A fact that is clearly not lost on MxPx or their fans for the last 20 years.

Of the 13 ignited songs on Plans Within Plans, none of them waste time trying to reach the "standard" three and a half minute mark. What that means for the listener is a "strap in and hold on" ride of super fun, singalong songs that will have you getting back in line for another round as soon as the ride's finished. Explosive track "Screw Loose" busts in like the Kool-Aid Man and just as quickly dips out in just a little over a minute! Songs like "Aces Up," "Nothing Left," In The Past," "Stay On Your Feet" and first single "Far Away" are half encouraging/half cathartic romps that will somehow leave you simultaneously spent and refreshed. Even when MxPx does one of their tried and true love songs ("Lucky Guy"), the energy is as palpable as the sentiment. While Mike's unmistakable bass tone, Tom's snarling guitars and Yuri's pounding drums are more than enough to carry this great album, they brought some friends along to help out for a couple of the songs. Special guests include Stephen Egerton (Descendents, All), The Swellers, Greg Bennett (Neutral Boy) and two of Mike's Tumbledown mates, Jack Parker and Harley Trotland. Even with so many additional folks, the cohesion between songs is flawless. The entire album has an amazing spirit to it, but to me, one of the most interesting tracks on the album is "Cast Down My Heart." The song was spawned from a poem of the same name that Mike found in a notebook given to him by his grandmother. He added his own spin on it but the hopelessness of the original poem's young girl dealing with a soldier boyfriend during WWII translates perfectly to the new song's characters. 2 minutes and 11 seconds of manic punk rock written around a grandmother's hand-me-down book of poems. Loud, fast, heart indeed.

You can pick up Plans Within Plans pretty much everywhere but you can also order it directly from the band on cd, vinyl or digital HERE.

"Cast Down My Heart" - MxPx (Plans Within Plans)

(Unfortunately some of the colored vinyl orders have been delayed at the plant. Once I get my gorgeous gold copy in, I'll post a pic of it as well.)