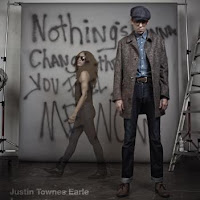 If you’ve ever listened to more than one album by Justin Townes Earle, you’re already aware of a few things. First, Justin refuses to color within any musical genre lines. Second, Justin refuses to put out the same album twice. Third, Justin refuses to write predictable songs. Fourth, Justin refuses to stand still. It’s that last characteristic that really sticks out and helps to define his newest album, Nothing’s Gonna Change The Way You Feel About Me Now. With an ever-building catalogue of amazing albums under his belt and an impressive musical pedigree behind him (his father is outspoken country-rock icon Steve Earle), Justin could certainly play things safe and comfortably tread the same musical waters album after album. But what makes him so authentic, so talented and so fun to listen to is his seemingly fearless affinity for rawness and his inability to repeat himself. His last album, Harlem River Blues, was one of my favorite albums of 2010 and I (along with a host of others I’m sure) wouldn’t have been too terribly upset with a new album that continued in that rich, soulful, alt-country vein. But that’s just not the Justin Townes Earle way. Instead of attempting to create Harlem River Blues Volume 2, Justin holed himself up in an old, converted church in the hills of Asheville, North Carolina and recorded Nothing’s Gonna Change The Way You Feel About Me Now… completely live, with no overdubs… in just a 4 day period. Not only are the results absolutely stunning and pleasantly surprising, but they are also completely different than anything Justin Townes Earle has ever come close to releasing. However, like any great artist who is more concerned with making great music than with anything else, the songs are completely and wholly him. Thankfully, no matter what sounds and moods he may experiment with, Justin’s unpolished vocals, laid back grooves, interesting characters and peculiar take on life are threaded into every song.

While listening through Nothing’s Gonna Change The Way You Feel About Me Now, the biggest sonic addition to Justin’s arsenal turns out to be the horn section that shows up on almost every song. The brassy lines certainly add an interesting texture to Justin’s soulful, folk-tinged songs and the end result totally works in a fresh and unique way. If the geographical feel of Harlem River Blues was a blending of New York and Nashville, then the horns place Nothing’s Gonna Change The Way You Feel About Me Now somewhere between Memphis and Muscle Shoals. In fact, the bluesy, unsettled tones found throughout the album help show Justin’s talent for skillfully writing in a variety of vibes. For example, album opener “Am I That Lonely Tonight” feels like an old doo wop ballad, “Maria” has an upbeat 70’s sway to it, “Memphis in the Rain” sounds straight out of a Stax Records outtake session and “Down on the Lower East Side” could’ve been a Bruce Springsteen or Tom Waits song. However, far from feeling like a “various artist” compilation album, Justin has a few songs that take on a transitional role, easing the listener from what he’s done before to what he’s currently doing now. Songs like “Baby’s Got a Bad Idea” recall his perfect rockabilly touch, “Won’t Be The Last Time” encompasses his hushed vocal/finger-plucked story songs and “Movin’ On” shuffles along like any good, folksy Justin Townes Earle song should. In fact, as a poignant album closer, “Movin’ On” captures the album’s themes and Justin’s overall spirit perfectly. With lyrics that touch on his ever-shifting wanderlust, his repetitive struggles and his relationship with his parents and a musical track comprised of bouncy acoustic guitar, stand-up bass, railroad drums and harmonica, “Movin’ On” is Justin Townes Earle.

While an album titled Nothing’s Gonna Change The Way You Feel About Me Now may come across as indignant detachment, I actually read it more as a call to trust Justin’s new directions and to continue on the musical journey with him. Because of his transparencies and his gifts, listeners are invited to become fans of his music and not just of an aesthetic or a particular sound because those most likely will (and should) change over time. By taking risks and trying new approaches, Justin has included a certain battle of familiarity vs. unfamiliarity and bravado vs. vulnerability in his music. This translates into a truly engaging and stimulating experience for the listener throughout the entirety of Nothing’s Gonna Change The Way You Feel About Me Now.

"Look The Other Way" - Justin Townes Earle (Nothing's Gonna Change The Way You Feel About Me Now)
Posted by Will Hodge at 10:22 PM