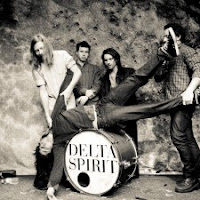 (Here's another piece I recently wrote for the fine folks at NoiseTrade.)

So-Cal garage folkers Delta Spirit have a new album coming out March 13 and they’ve got two incredible EPs (I Think I’ve Found It and The Waits Room) up on NoiseTrade for your consumption and enjoyment. Blending together a soulful sonic landscape of greasy rock riffs, sing-a-long vocals and raw energy, Delta Spirit seem to just plug in and go for it each time they play. By cleverly offering the bookends of their first release and their most recent, you’ll be able to get a pretty good gauge of just how special Delta Spirit is.

I Think I’ve Found It came out in 2006 and it was the band’s first ever release. They quickly carved out their own unique place with the Stones-swagger of “Streetwalker,” the punk-stomp of “Crippler King” and the saloon-soaked piano of “French Quarter.” As a debut, I Think I’ve Found It does a great job of introducing the band and showcasing some of their musical roots. By allowing their influences to poke through, without ever letting them overstay their welcome, Delta Spirit smartly offers a simultaneous peek into themselves and their record collections.

The Waits Room was released in 2010 and as cheesily-cliched as it sounds for me to say, it undeniably shows a maturity and an expansion of their sound in a way that most bands don’t ever get to experience. By focusing their passion and attitude into a more nuanced palette of songwriting and instrumentation, the tracks on The Waits Room show Delta Spirit unraveling more layers of themselves in both content and approach. They effortlessly create an intimate atmosphere with steady-strummed acoustics, subtle electrics and storyteller vocals, even throwing in some tasty harmonica as a cherry on top. The folky fingerpluck of “Devil Knows You’re Dead” and the romantic reminiscence of “Bushwick Blues” might have you thinking the boys went all coffee shop soft all of a sudden. But make no mistake about it, this EP is just as brash and beautiful as their first and I’m pretty sure the inclusion of “John Henry” was to remind everyone what can happen when the guys let go. The cracking snare, distorted guitars, and bullet-mic vocals evoke a little MC5 flavor and they do an incredible job of amping up the early 1900’s folk song and making it their own.

Both EPs sound incredible and give you a great taste of what Delta Spirit can do. Their self-titled new album will be released on Rounder Records on March 13 and you can hear the first single, “California,” HERE. As a bonus, if you just can’t seem to get enough Delta Spirit, they’ve got 4 amazing sessions up on Daytrotter, including one that’s made up exclusively of Tom Waits covers.