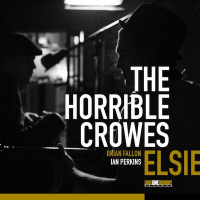 I’ve ranted before about my distaste for the plethora of “Year End Top 10” lists and the pretentious haughtiness they seem to carry when they use the “most important” and “must have” verbiage. Someone’s “best of” is rarely the exact same as another’s “best of,” but that never stops us from dissecting and discoursing about the albums that seemed to touch us the most throughout the year. Some lists are based on sales, some lists are based on cool points and some lists just try to be as contrarian as possible. At the end of the day though, it sure is fun just to talk about music that’s meaningful to you. Lists don’t matter at all, but the music absolutely does. So once again on behalf of unnecessary lists everywhere, here’s my “Personal Favorites” list of albums that grabbed me the most last year.

The Horrible Crowes – Elsie: Comprised of Brian Fallon of The Gaslight Anthem and his friend/guitar tech Ian Perkins, The Horrible Crowes is a moody, atmospheric outfit that begs to be listened to in the low light of evening. Each cinematic song is a beautifully unsettled mix of serenity and agony, catharsis and meditation, rumbling with a restrained energy that never bubbles over into excess.
The Civil Wars – Barton Hollow: This Southern gothic folk duo gorgeously combines heart heavy lyrics with harmonious vocals courtesy of Joy Williams and John Paul White. The beauty of The Civil Wars is what they do with so few ingredients. Their two voice, one or two instrument approach gives their songs the illusion of a fragile veneer that gently cloaks their rock solid songwriting.
R.E.M. – Collapse Into Now: When this album released back in March, no one knew that the Athens-based alt-legends would eventually announce their demise later in the year. What initially seemed like a passionate, cranked-up return to the early days quickly turned into a send-off love letter to the masses. For a decades-long fan like myself that hated to see them call it quits, it was nice to see them go out with such power and gusto.
Wilco – The Whole Love: After Wilco caught a little heat for the perceived safeness of their last album, Jeff Tweedy and the boy returned with an album as inspired and ambitious as their Yankee Hotel Foxtrot days. The Whole Love finds Wilco firing on all cylinders and doing what few, if any, other bands could. Whether thumbing gentle acoustic ballads or mixing searing electrics with danceable synth loops, Wilco proves that they are still as uncontainable and untouchable as ever.
Sandra McCracken and Derek Webb – TN EP: As a follow up to 2008’s Ampersand EP, Derek and Sandra combined their songwriting and instrumental talents again for their second joint collaboration, TN EP. When two incredibly strong musical forces try to merge, the results can be oil and water. However, the cohesion found on TN EP is more akin to a chemical reaction where the ingredients transform into something completely new and inseparable. Each track is melodically lush and layered, built on a foundation of solid songwriting and complemented by a variety of organic and non-organic musical elements.
Danger Mouse and Daniele Luppi – ROME: Take two innovative producers, a sprawling sonic landscape and a cast of musicians from vintage spaghetti western soundtracks. Then splash in a little Jack White and Norah Jones into the mix and you’ve got the brooding strains of the ROME project. With 9 instrumental tracks and 3 songs a piece for each guest vocalists, each song blends seamlessly into the next for a trippy 60’s vibe that makes this one of the coolest and most unique albums of 2011.
The Hawk In Paris – HIS + HERS EP: Three college friends (Dan Haseltine, Matt Brownleewe and Jeremy Bose) separately traversed their own successful paths in the music industry and then reconnected to form an amazing electronic trio called The Hawk In Paris. Their debut EP pulls from the synthpop and new wave gurus of their 80’s upbringing and adds in the dance beats and modern advancements of those carrying the electro-torch today. HIS + HERS is a tasty seven song EP and the guys are currently in the studio working on a full-length release for 2012.
Social Distortion – Hard Times and Nursery Rhymes: For us Social Distortion fans, Hard Times and Nursery Rhymes was both a long time coming and well worth the wait. Not only does Hard Times and Nursery Rhymes contain some of Social Distortion’s loudest guitars and finest vocal performances to date, but they even threw in a couple of new sonic twists and turns not usually found on their records. But don’t worry, their calling card of huge guitars, snarling vocals and a pounding rhythm section are all over this bombastic and diverse album.
Foo Fighters – Wasting Light: For Foo Fighters’ seventh studio release, Dave Grohl did his darndest to obliterate any final dividing lines between his current and former band. Not only was Wasting Light an incredibly heavy, band-oriented album, but Grohl employed some pretty Nirvana-friendly personnel as well. Butch Vig produced the album, Krist Novoselic played bass and accordion on “I Should Have Known” and Pat Smear officially returned to the fold for his first Foo’s album since The Colour and the Shape. Catchy, anthemic and slathered in guitars, Wasting Light reminded everyone why Foo Fighters has been able to stay on top through the 90’s and 00’s and why they are still going strong.
Various Artists – Rave On Buddy Holly: Tribute albums are notorious for being hit or miss affairs, but this one certainly has more shining moments than duds. Having some of Buddy Holly’s best-known songs interpreted through a variety of voices and genres really highlights the power and originality of his songwriting. While there are some pretty big name artists on here like Paul McCartney, Patti Smith and Nick Lowe, I really enjoyed the offerings from the younger crowd of Justin Townes Earle, Karen Elson and Florence + The Machine.
Posted by Will Hodge at 6:45 AM