My Part-Time Cover: "The Wurlitzer Prize (I Don't Want To Get Over You" 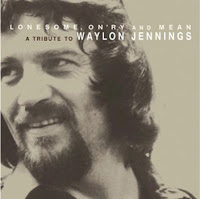 Last week I did a giveaway for The Little Willies and I asked the following question:

Name the classic country cover song (and the album it appeared on) that Norah and Richard collaborated on BEFORE The Little Willies was officially a band.

The song that Norah and Richard covered was Waylon Jennings’ “The Wurlitzer Prize (I Don’t Want To Get Over You)” and it appeared on the album Lonesome, On’ry and Mean: A Tribute To Waylon Jennings which was released in 2003. Waylon originally released the song as a single in 1977 and it also appeared on the album Waylon and Willie the very next year. Waylon and Willie is one of those legendary Outlaw Country albums that was released in defiance of the schmaltzy, glitzy music that was coming out of Nashville at the time. The album hit #1 on the charts, went double platinum and was bookended by the great “Mammas Don’t Let Your Babies Grow Up To Be Cowboys” and “The Wurlitzer Prize (I Don’t Want To Get Over You).” I love the audible ache in the music and the honest heartbreak in the lyrics. At a time when machismo and bravado were expected from these rough and tumble “outlaws,” lines like “I’m not here to forget you, I’m here to recall” and “Help me remember you, I don’t want to get over you” show an usually softer, more heartfelt set of emotions. Ones that, if even shown at all, are usually reserved for love songs, not the break-up ones. This one’s a total barroom weeper and it’s a great example of that killer musical time period.

Norah’s penchant for classic country music led to her being asked to be on the Waylon tribute album and she just so happened to bring in her friend Richard Julian to help out on harmony vocals. No offense to Waylon or Willie, but hands down I love this smoky version the absolute best. While they decided to keep the vibe pretty true to the original, there’s definitely a little more melancholy and soul to the delivery in Norah’s cover. It’s also a really interesting flip to hear the same lyrics sung from the perspective of a female. There’s just something about “Alone at a table for two” and “A fresh roll of quarters” that’s a little more of a gripping image when it’s a female instead of a male. Most undeniably awesome though is the magical blending that always takes place when Norah and Richard sing together. That’s what struck me the most when I first heard this song. When The Little Willies released their debut album a few years later and I had a full album of them singing together, it was definitely a dream come true for me. With the release of For The Good Times last week, The Little Willies are two for two and I truly hope there’s even more magic to be had from them in the future.

"The Wurlitzer Prize (I Don't Want To Get Over You)" - Norah Jones (Lonesome, On'ry and Mean: A Tribute To Waylon Jennings)
Posted by Will Hodge at 6:03 PM