The Little Willies - For The Good Times (Album Review) 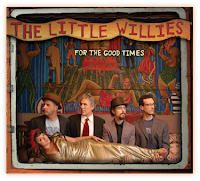 When talking about The Little Willies, the term “classic country cover band” is an accurate, yet sorely understated, description. Comprised of five friends (Norah Jones, Richard Julian, Jim Campilongo, Lee Alexander and Dan Rieser) who just so happen to all have successful music careers on their own, The Little Willies is definitely one of the most talented and fun-loving group of musicians who ever got together to play other people’s songs. They released their self-titled debut album in 2006 and for their recently released second album, For The Good Times, The Little Willies once again draw deep from the well of the mid-century classic country songbook. As they reinterpret songs made famous by such “legends on a first name basis” as Hank, Johnny, Loretta, Kris, Dolly, Lefty and their namesake Willie, they also sprinkle in a few lesser know gems that easily manage to hold their own beside the bigger hits. There’s even an original Campilongo-penned instrumental (save for a lyrical shout out) that reminds everyone that they could certainly write an album of twangy tearjerkers if they wanted to. But creating those brand new songs isn’t the main focus of The Little Willies. What was originally supposed to be just a Willie Nelson cover band (hence the name) eventually turned into the more expansive catalog version of The Little Willies we know today. But what didn’t change was their reason for getting together in the first place; to have fun while playing some of their favorites of the songs they grew up on. As a listen through For The Good Times will attest to, they’ve successfully blended nostalgia and now for an incredible album of reimagined classics.

For The Good Times kicks things off with a raucous romp through Ralph Stanley’s “I Worship You” that cleverly alternates between a burlesque-drum chorus and a Texas two-step verse. Jim’s slinky guitar picking, Lee’s walking double bass and Dan’s versatile drumming create a fluid foundation for Norah and Richard to beautifully harmonize over. “I Worship You” is a great choice for the opener as it showcases both the upbeat energies and the quieter powers of The Little Willies, all contained within one song. The feisty spirit that’s found in the verses is one of my favorite characteristics of The Little Willies and it’s perfectly repeated throughout the album on songs like Loretta Lynn’s “Fist City,” Lefty Frizzell’s “If You’ve Got The Money I’ve Got The Time” and Johnny Cash’s “Wide Open Road.” In fact, Norah’s flawless channeling on “Fist City” and Richard’s attitude on “Wide Open Road” are two of my most favorite moments on the album. Luckily though, as great as they are on the stompers, they are equally as note-perfect on the weepers. They handle the titular “For The Good Times” as tenderly as the Kristofferson original and Willie Nelson’s “Permanently Lonely” contains a heartbreakingly smooth vocal from Richard, a little barroom tinkling piano from Norah and some beautiful acoustic guitar work from Jim. The hands-down showstopper of the album though is their take on Dolly Parton’s “Jolene.” With a brooding undercurrent bubbling below Norah’s pleading vocal, all five members skillfully match the fragility and emotion found in the lyrics. With all of these amazing standards, plus a few welcomed surprises like “Fowl Owl On The Prowl” and “Diesel Smoke, Dangerous Curves,” For The Good Times ends up blending memories with freshness and the comfortable with the unconventional, all to outstanding results. If your flavor of country music is more AM than FM, you’d be well served to check out For The Good Times and also keep your eyes and ears peeled for The Little Willies. They’re not always on the road, but like all good music, they’re always around.
For The Good Times will be released on Tuesday, January 10 and can be pre-ordered on CD or vinyl directly from The Little Willies HERE.
"Wide Open Road" - The Little Willies (For The Good Times) 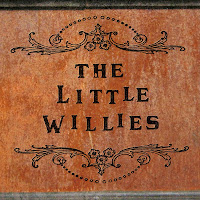 ***FREE GIVEAWAY CONTEST: Answer the trivia question correctly and you could win a copy of The Little Willies self-titled debut album on CD.***
Name the classic country cover song (and the album it appeared on) that Norah and Richard collaborated on BEFORE The Little Willies was officially a band.
Once you've got the answer, email me at mysocalledsoundtrack@gmail.com with your answer, your name and your address. Don't worry, I promise not to sell your info to any magazine subscription services unless the price is just too good to pass up. Just kidding of course! My So-Called Soundtrack promises not to sell or give your info to any third party, blah, blah, blah.
***Deadline for entry is Tuesday, January 17***
Posted by Will Hodge at 6:30 AM