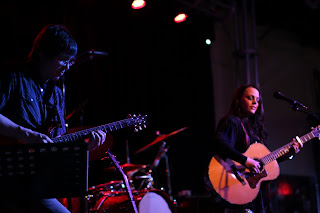 There are all types of Christmas songs, but there’s something special about a sad Christmas song done really well. Nashville singer/songwriter Mindy Smith knows exactly how to strike the balance between merriment and melancholy, as proven first with her 2007 release My Holiday and more recently with “ A Holiday Evening with Mindy Smith” last Friday night at 3rd and Lindsley. Showing there’s more holiday sentiments than just warm and fuzzy, Mindy and her band (cleverly dubbed the Wisemen for this show) played a gorgeous set of songs that was relaxed, wistful and yes, even sad at moments. Don’t get me wrong, there were plenty of laughs and some upbeat songs as well. Not to mention Mindy’s hilarious monologues between almost every song. But she’s at her absolute best when she’s channeling an ache that spills over into every note she sings. She strikes that emotional chord with an honesty and musicality that many artists can never seem to find. It’s a perfect mixture of pain for the heart and pleasure for the ears.
To compliment the feel of her full band set, Mindy chose an excellent opener in kindred spirit Kate York. Even though she only played six songs, Kate’s set was jammed packed with stunning songs and special guests. For her reflective brand of balladering, Kate quietly strummed an acoustic and was tastefully backed by Ian Fitchuk on keys. She opened with an original, “For You,” and was joined by Daniel Tashian on back-up bgv’s. She then bravely played two brand new songs, “I’ll Wait For Your Love” and “Nothing In This World Will Ever Break My Heart Again.” (Being new songs, I’m totally guessing on those names.) Next, she played a couple of covers, including an amazing version of Courtney Jaye’s “Don’t Tell A Girl” with Thad Cockrell and a piano only version of Marc Cohn’s “True Companion.” Kate closed her set out right with a heavenly duet of “Eternal Gifts” with Leigh Nash. Between the excellent song selection and the top shelf guest singers, Kate set the room up perfectly.
When Mindy hit the stage, you could genuinely feel the excitement and anticipation in the room. Her crystal clear voice and engaging stage presence were on display all night, tugging heartstrings and cracking jokes. She started off with a strong four song set from her Christmas album, My Holiday, that included “Come Around,” “My Holiday,” “Follow The Shepherd Home” and “Santa Will Find You.” She returned to My Holiday a few times throughout the night with “The Christmas Song,” “I’ll Be Home For Christmas” and my personal favorite moment of the night, “I Know The Reason” with Thad Cockrell. Thad also joined her for a heartbreaking “Fall For Nothing” that really shined. Speaking of guest vocalists, she also brought up Daniel Tashian for the bouncy duet, “Taking You With Me.” Both of their voices blended perfectly on this folksy love song and the enthusiastic applause from the crowd made it one of the many highlights of the night. For most of the set, Mindy was backed by a tight band that featured Casey Pollock on guitar, Ian Fitchuk on drums, Michael Rinne on bass and John Deaderick on keys. Apart from creating the sheer festiveness of the Christmas songs, they also really showed up really well on Mindy’s cover of Dolly Parton’s “Jolene” and on a powerful “Come To Jesus.” The guys played incredibly well and added a nice sonic depth to Mindy’s songs when they joined her. She did play a few songs solo or with only one or two band members though and for an artist like Mindy, these are the moments that make you a lifetime fan. “Tennessee,” “Raggedy Ann” and a touching “One Moment More” were somehow heartbreaking and soul filling at the same when filtered through just her voice and her guitar. To close the show out, Mindy called up Leigh Nash and they traded off verses for a tender take on “Away In A Manger.” Ending with this beautifully appropriate Christmas carol put a nice little bow on the night and sent everyone back out into the cold with a little more warmth in our hearts. My fingers are crossed that we’ll be hearing some new music from Mindy next year, but her awesome Christmas show was more than enough to get the season kicked off right and to tide me over until then!
Setlist:
- Come Around

Encore:
- Jolene
-One Moment More
- Raggedy Ann
- Away In A Manger
Posted by Will Hodge at 6:02 AM