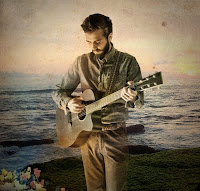 (This interview originally appeared on NoiseTrade.)

When trying to describe an artist, it’s really easy to just use other bands as reference points. However, with a sound as marvelous and mysterious as Lord Huron’s, I’d like to try a different approach. Close your eyes and imagine yourself lazily swaying back and forth in a hammock. Relaxing isn’t it? Picture yourself breathing in deeply as you look out over the water. Can you hear the seagulls? Now, instead of equatorial ocean waters, envision the balmy breeze of the Great Lakes. You can still wear the Hawaiian shirt, but you might want to put a light jacket over it. Listen close. I know it’s hard to tell if that distant metallic pulse is the sound of steel drums or an industrial machinery plant, but either way it has an incredibly soothing cadence doesn’t it? Then, just when you’re about to be completely enveloped by the lushness of it all, you get abducted by aliens with fantastic melodic sensibilities and other-worldy rhythmic abilities. This constant ebb and flow between putting your feet up on the dash and tapping your toes is what creates the beautiful backdrop for the soaring sounds of Lord Huron.

Lord Huron, a one man symphony conducted by Ben Schneider, is relatively new on the scene and we here at NoiseTrade are honored to be offering a compilation of their two EPs, Into The Sun and Mighty. Originally hailing from Michigan and currently residing in Los Angeles, Lord Huron combines a multitude of musical attitudes and ingredients to create something wholly original and mesmerizingly interesting. By successfully splicing together strands of familiarity with uncharted territories, the results feel like a trustworthy tour guide that just happens to always have a wild look in his eyes. So whether we find the lost ruins or plummet over the waterfall, it’s going to be fun and adventurous either way. Recently, I had the pleasure of interviewing Ben and here’s what he had to say about Lord Huron:

NT: After listening to the gorgeously sun-soaked songs on your two EPs (Into the Sun and Mighty), it’s surprising to hear that you’re originally from the frosty confines of Michigan. Where did the inspiration come from for the world beat influences and tropical flavors you incorporate into your songs?
Ben: Michigan is thought of as a land of ice and snow, and indeed it is for much the year. But there’s another side to Michigan. Summers on the Great Lakes are warm and sunny. I’ve drawn a lot of inspiration from the summers I’ve spent there, the winters, too, as well as my travels abroad. I’ve always had an interest in music from around the world, and although my music is rooted in American folk, that “world” influence has been key in crafting the aesthetic of Lord Huron.

NT: Your lyrics invoke a palpable feeling of longing and wanderlust, both relationally and geographically. Are these intentional ingredients to your songwriting and were they involved at all in your relocation to Los Angeles?
Ben: Those themes have definitely played a big part in the course of my life, and as they say it’s best to write about what you know.

NT: Your use of acoustic instrumentation to anchor the sprawling sonic landscapes and amazing polyrhythmic grooves strikes a unique balance of stimulation and relaxation. Is this a natural blending for you and how do you integrate these seemingly contradictory states?
Ben: I’ve tried hard to create a sense of momentum and excitement without relying too heavily on tempo or volume. It is sometimes a strange balance, and sometimes I’ll have a completely different sense of a song’s energy from one listening to the next. Maybe that reflects my mood or state of mind. I think this chameleonic aspect has helped people connect with the music. In some ways, it requires interpretation.

NT: Both EPs open with water sounds and water is a prominent part of the artwork for both releases as well. Even the name Lord Huron brings to mind the Great Lake Huron region between Ontario and Michigan. What do these watery themes signify to you and how do they relate to your music?
Ben: Lake Huron has played a very important part in my life. Many of my formative experiences, as well as the brightest and darkest moments of my life happened at the lake. There is a mystery and mysticism to bodies of water and that part of the world in particular that won’t let go of me.

NT: Can you tell us a little bit about your songwriting process? Do you start off on acoustic guitar and then build the musical layers around it or do you hear the overall sonic textures first and then try to nail down the ingredients that make it up?
Ben: I often begin a song visually, imagining a scene that I attempt to illustrate with sound. For some reason this always helps me get my mind around it. The image may change or distort as I work, but hopefully I end up somewhere close. Guitar is my primary tool in composing.

NT: While you played every note and beat on both of your releases by yourself, you’ve been touring with a band. What are the most challenging and most rewarding parts of solo recording and full band performing?
Ben: Figuring out how to pull off this material live has definitely been a challenge. If I had it my way I’d have a twelve-piece orchestra with me every night. But that just isn’t realistic right now. We’ve had to make it work with 5 guys. Luckily, I’ve got an amazing group to work with. I think we’ve done a good job recreating the expansive sound of the records. The band is incredibly talented. (They’re) all great friends from Michigan who really know how to play and are willing to experiment. We’re starting to record together as well, which is exciting. Having these guys involved can only mean good things for the recordings.