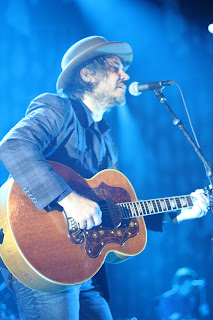 No one can do what Wilco does.

I’ve always had a sneaking suspicion that this was true, but last night’s transcendent performance at The Ryman made it a foregone conclusion. In front of an enthusiastic and appreciative crowd, Wilco lit up the room and played like they were a young band trying to prove something. Their unique mix of fantastic songwriting, gorgeous melodies, complex rhythms, incendiary guitar solos, lush harmonies, garage-rock freak outs, acoustic ballads and everything in between rang out loud and true in one of the most beautiful and historic venues in music’s history. Countless legends have played the Ryman stage and there’s no doubt that time will show Wilco being mentioned among the greats. It’s really a special thing to see a band at peak performance, firing on all cylinders and going for broke. There is no safety net when Wilco plays and there are moments when you can’t imagine how they are going to cohesively resolve the chaotic din they’ve just created. But then they do it, effortlessly and perfectly, with no band mate or audience member left behind. Wilco managed to balance their monster catalog of fan favorites with songs from their brand new release, The Whole Love, to spectacular results. Even if you didn’t hear “your” favorite Wilco song, you still got to hear much of their best work as they played at least one song from every major release of theirs. They even reached back to their debut, 1995’s A.M., for two songs. By the time their 8-song encore was finished, there wasn’t a seat filled or a mouth closed as the entire audience let the guys know that they had experienced something magical that wouldn’t soon be forgotten.

Kicking the night off in a no frills, unannounced manner was the Jesus of Cool himself, Nick Lowe. Armed with just an acoustic guitar and his crystal clear voice, Lowe took on the role of an English troubadour moreso than the new wavey, pub rocker he’s been since the 1970’s. With a playful smirk and a youthfulness that defied his 60+ years, Lowe charmed the audience with acoustic renditions of some his best loved songs and some of his newer tracks from his latest album, The Old Magic. He smartly bypassed the stool-sitting, coffee house vibe for an upbeat, Elvis inspired leg-bouncing take on his tunes. Songs like “Cruel To Be Kind,” “When I Write The Book,” and “The Beast In Me” got immediate reactions from the first note, while other songs seemed to be listened to for the first time by many in the audience. “All Men Are Liars” got an exuberant reaction from the females in the crowd and Lowe’s tender take on Elvis Costello’s “Alison” was incredibly awesome to say the least. Nick’s one of those guys whose production work and songwriting has seemed to generate more success for other artists (Elvis Costello, Johnny Cash) than for himself, so it was really nice to see him in his element, singing his songs, his way. For anyone who made it in only enough time to see Wilco, you absolutely missed out on a musical legend sharing his songs and having fun. Nick’s set list consisted of: “Stoplight Roses,” “Heart,” “What’s Shaking On The Hill,” “Ragin’ Eyes,” “All Men Are Liars,” “Lately I’ve Let Things Slide,” “I Live On A Battlefield,” “I Read A Lot,” “Cruel To Be Kind,” “Alison (Elvis Costello cover),” “When I Write The Book” and “The Beast In Me.”

Wilco boldly opened their set with the sprawlingly adventurous “One Sunday Morning,” a 12-minute acoustic-led ballad about the struggle between a father and son who have differing opinions on God. While some may have wanted Wilco to come out with guns blazing, I think this move showed that the guys trusted the audience enough to have the patience and the attention span to stick with them for the whole ride. It paid off in spades as the crowd erupted to the opening organ strains of the next song, “Poor Places” off their landmark album, Yankee Hotel Foxtrot. It only took until that second song for Wilco to showcase their innate ability to descend into chaos and emerge unscathed without missing a beat. They would return to Yankee Hotel Foxtrot four more times throughout the night, each time capturing the deconstructed nature of the songs perfectly. Following “Poor Places,” frontman Jeff Tweedy took off his guitar to sing and dance his way through “Art of Almost,” one of eight songs played off Wilco’s newest release, The Whole Love. The new songs were met with varying degrees of familiarity, but each one still garnered the thunderous praise of an engaged crowd. With the exception of “Art of Almost” and “I Might” being played back-to-back, each new song was sandwiched between familiar older ones. It’s as if Wilco was saying, “Here’s why you love us. Give this new song a chance. See, you still love us.” Throughout the night, many songs broke out into word-for-word singalongs with “I Am Trying To Break Your Heart,” “Handshake Drugs,” “Impossible Germany” and “Jesus, Etc.” eliciting the loudest group vocals. Whether they were nailing tight, melodic rock songs with hook-filled choruses (“A Shot In The Arm,” “Monday,” “Born Alone”), experimenting with noise and sound during mix-metered passages (“Poor Places,” “Handshake Drugs,” “Art of Almost”) or holding the crowd by a string with acoustic fragility (“Red Rising Lung,” “One Sunday Morning”), Wilco showed that each band member plays like a virtuoso and knows their specific role in each moment of each song. There isn’t a weak link to be found. Jeff Tweedy’s songwriting eloquently shifts between passionate outbursts, lovelorn woes, concrete ideals and abstract imagery. Nels Cline is a guitar wizard who gets tones like no one else and hits notes that boggle the mind. Glenn Kotche sounds like he’s playing drums with octopus arms and has an uncanny knack for never playing anything straight without ever overplaying at all. John Stirratt keeps the train on the tracks with his solid, yet fluid, bass playing and adds incredibly gorgeous harmonies to Jeff’s vocals. Mikael Jorgensen transforms anything with keys, be it piano, organ or computer, to add melodic flourishes and help create Wilco’s dense sonic atmospheres. Pat Sansone fills in the holes with integral keyboard, guitar and vocal parts to make sure nothing is missed and to help elevate each song to maximum sonic force. Each member had multiple shining moments throughout the night and there were sections of more than one song where each member was completely locked into each other and they were simultaneously creating something new together. This was felt most heavily in the cacophonous outro of “Handshake Drugs,” ”the triple guitar lead of “Impossible Germany” and the joyful explosiveness of “Monday.”

For their encore, Wilco opened with the new song “Whole Love” and then brought out Nick Lowe to help out with two of his songs, “36 Inches High” and “I Love My Label.” Wilco’s version of “I Love My Label” can be found on the b-side of their 7” single for “I Might” and this was the second time of the night that Jeff went guitar-less to just sing and dance along with the song. After Nick left the stage, the boys continued with a twangy “Box Full of Letters,” a jamming “Walken,” a frienzied “I’m The Man Who Loves You” and a closing one-two knockout punch of Being There’s “Monday” and “Outtasite (Outta Mind).” While they could’ve probably played all night with out very many audience members leaving, Wilco graciously exited to a roaringly satisfied crowd of fans. If you ever have the chance to catch Wilco live, you’ll never forget the experience. Thanks to Wilco and Nick Lowe for a monumental show that is forever etched onto my musical heart.