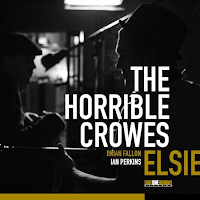 When frontman Brian Fallon first labeled The Horrible Crowes (his new side project with friend/guitar tech Ian Perkins) as “night time music,” he couldn’t have chosen a better description. Elsie, the duo’s debut release, sounds like it was written in the wee hours and begs to be listened to in the low light of evening. Each cinematic song is a beautifully unsettled mix of serenity and agony, catharsis and meditation, rumbling with a restrained energy that never bubbles over into excess. That may run the danger of sounding a bit hyperbolic, but Elsie is worth the risk. As each song develops and unfolds, layer after layer of lyric and instrumentation is woven together in a unique and comfortably uncomfortable way. For the musical vibe, Brian and Ian combine elements of blues, rock, soul, folk, gospel and all variants in between into a soulful soundscape all their own. There’s loads of piano, guitar, bass, organs and drums laying the foundation, but the flavor found in the horns, strings, accordion, tambourine and timpani that are sprinkled throughout really flesh out the mood nicely. As Brian’s vocals travel easily between croon and groan, you almost feel like you’ve stumbled into someone’s innermost feelings and thoughts. You know, the kind that usually don’t make it to voice or paper until they are sufficiently either chewed on or thrown out. But that’s the beauty of The Horrible Crowes. They’ve created a space to pause, to search and to dream. Sounds a bit like the night time, doesn’t it?

“Last Rites” opens the album with a stretched out wash of sound that eases you in with minimalist piano chords and lonesome organ lines. There’s also some ghostly backgrounds doubling the main vocal, an ingredient that is used to perfection and reappears throughout the album. The same brooding, haunted vibe is echoed on “Cherry Blossoms,” “Blood Loss” and the fantastic closer “I Believe Jesus Brought Us Together.” With songs like “Sugar,” “Black Betty and the Moon” and first single “Behold The Hurricane,” Brian and Ian showcase the art of the restrained groove. It’s not that hard to either go for broke or just ease on down the road, but striking that controlled balance in between takes a special touch. These tracks anchor the album in a really cool way that allows some of the other songs to spread out a little more. One of those looser cuts, “Mary Ann,” is currently my favorite track on the album. Agitated electric guitars, distorted bass and stuttering drums create an incredible backdrop for Brian to passionately channel the love child of Tom Waits and James Brown. There’s some tasty accordion and a slightly unhinged guitar solo on the track as well. As far as lyrical content, I’ve made no attempts to hide my admiration for Brian’s songwriting and he continues to raise the bar with Elsie. With The Horrible Crowes, Brian draws less from the winks and nods to his musical heroes that he uses so well in a lot of The Gaslight Anthem’s songs, while still painting with the colors of lost love, religious imagery, cars and girls. From the opening line of the album, “Start up the car,” to the heartbreaking closer, “I was just about to call you,” Elsie is full of moments that will crawl under your skin and creep into your heart for one reason or another. So do yourself a favor, pick up a copy of Elsie, wait for evening to come, draw the shades and take her for a spin. She’ll make a believer out of you boy.

Elsie can be ordered from Side One Dummy HERE or from your local independent record store.