I’ve decided to devote the rest of the week to MTV’s legacy and impact by writing about some of its most memorable moments throughout the years. Today, I’m going to be looking at the way MTV revolutionized awards shows with the MTV Video Music Awards. Thanks to a consistent showing of explosive musical performances and an outspoken cast of hosts and presenters, the “awards” part of the VMAs have almost become an afterthought. While carrying home a “moon man” was a pretty big deal that first decade or so, nowadays pretty much everyone tunes in for the theatrics, the characters and the overall spectacle of the event. The VMAs first aired all the way back in 1984 and they are still going today. However, it depends on who you ask as to whether they could be considered still going strong. No matter your age or interest though, the VMA almost always guarantee something memorable, good or bad, for the highlight reel. 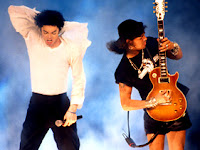 Performances: In regards to musical performances, the VMAs have never disappointed the pop culture public. Right out of the gate, the inaugural VMAs set themselves up as the Grammys’ unruly, cool younger brother with Madonna’s iconic half wedding gown/half bustier clad “Like A Virgin” that people still talk about to this day. A few years later she turned in another landmark performance with an over-the-top 18th century ballroom version of “Vogue.” Michael Jackson tore through the 1995 VMAs with an untouchable 10 song medley of his biggest hits with Slash joining him on guitar. In 1989, Bon Jovi’s acoustic performance of “Wanted Dead or Alive/Livin’ On A Prayer” was noted as one of the key inspirations for the MTV Unplugged phenomenon. Before all the flightiness and drug rumors of recent years, Paula Abdul solidified herself as one of the most talented singer/dancer/choreographers of the 80’s with an energetic medley of “Straight Up,” “Cold Hearted” and “Forever Your Girl.” Great performances even took place outside of the venue with Foo Fighters playing “Everlong” and “Monkey Wrench” from atop the Radio City Music Hall marquee and Eminem leading a collection of look-a-likes from the streets of New York and into the auditorium for “The Real Slim Shady” and “The Way I Am.” Generation gaps were bridged with combinations like Elton John teaming up with Guns N’ Roses for “November Rain” and Pearl Jam joining Neil Young for an explosive “Rockin’ In The Free World.” The Pearl Jam/Neil Young combo is probably my favorite actual musical performance, while my favorite non-musical performance is probably when Nirvana bassist Krist Novoselic caught a bass in the face after an ill-fated toss.

Hosts: Hosting the VMAs has to feel more like being a ring leader than an emcee, but so far everyone has done at least fairly well. The first VMAs were co-hosted by the seemingly odd couple of Dan Aykroyd and Bette Midler. (By the way, between hosting the first VMAs and somehow getting into the “We Are The World” choir, Dan Aykroyd’s PR person was on it in the mid-80’s!) Multi-show hosts include Arsenio Hall with a whopping four in a row (1988-1991), Chris Rock with three (1997, 1999, 2003), and Dennis Miller, Downtown Julie Brown, Dweezil Zappa and Russell Brand all with two. My personal favorite for host was probably Dana Carvey in 1992, thanks in no small part to him dressing as Garth from “Wayne’s World” and playing “Even Better Than The Real Thing” with U2. 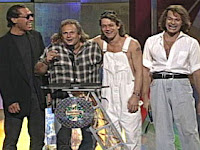 Reunions: The VMAs have been the chosen occasion for a couple of pretty cool reunions. In 1990, Bobby Brown and New Edition buried the hatchet for a mega-medley that included Bell Biv DeVoe’s “Poison” and “Mr. Telephone Man” as highlights. Two awesome reunions happened at the 1999 VMAs, as Aerosmith and Run DMC hooked back up for an amped up “Walk This Way” during Kid Rock’s performance and Dr. Dre and Snoop Dogg performed “Nuthin’ But A G Thang” during Eminem’s performance. In 1997, a very interesting reunion of sorts took place when Franz Stahl got back together with Dave Grohl, his former band mate from Scream, when he replaced Pat Smear in Foo Fighters. The announcement of Pat Smear’s departure and Franz Stahl’s entrance was announced in between songs. However, what would probably be considered the biggest (or maybe least likely) reunion took place in 1996, when the four original members of Van Halen appeared together for the first time in over a decade to present an award. Apparently it was a little too soon though because no sooner did they get backstage than… 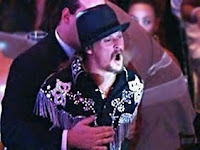 Fights: …David Lee Roth and Eddie Van Halen got into a major fight that almost got physical. At various other VMAs, more “almost” fights also took place between Axl Rose/Kurt Cobain (1992), Eminem/Moby (2002) and Axl Rose/Vince Neil (1989). Occasionally though, things actually did escalate to punches with fistfights taking place between Kid Rock/Tommy Lee (2007), Bret Michaels/C.C. DeVille (1991) and Vince Neil/Izzy Stradlin (1989). Apparently, it’s not all just music and moon men at the VMAs. Knuckles up!

Wackiness: Let’s all be honest. As much as we look forward to the music and jokes, we’re also kind of crossing our fingers for those crazy shenanigans that only the VMAs can produce. I’m talking about those unexpected, sometimes even unscripted, moments that we never saw coming and that can end up being hard to explain to someone who didn’t see it for themselves. Michael Jackson has been responsible for a few of them, including the creepily awkward kiss with new wife Lisa Marie from 1994 and the accidental acceptance of the non-existent “Artist of the Millennium Award” in 2002. Kanye West’s interruption of Taylor’s Swift’s acceptance speech in 2009 shocked everyone and gave us more imitations and recreations than any one cultural event should have to bear. Even the meltdowns can be hard to look away from, with Courtney Love’s make-up launching interruption of the Madonna-Kurt Loder interview in 1995 and Rage Against The Machine’s Tim Commerford’s stage rush and scaffolding perch in 2000 being two of the most uneasy to watch. Even seeing Pee Wee Herman in full gear for the first time after his arrest in 1991 was only made more comfortable by his perfect opening line, “Heard any good jokes lately?”

In middle school and high school, I can remember having friends over specifically to watch every second of the VMAs as they unfolded. Many, many fun times were had during those broadcasts, both on screen and in our living room. Eventhough the last complete VMAs I watched would’ve been in the early 2000’s, this era of instant info makes it easy to keep up and find out anything you may have missed. Even if you’re not checking out the VMAs any longer, hopefully these recollections will spark a happy memory or at least send you to YouTube for another viewing.