For any kid stuck at home during the summer in the 90’s, the MTV Beach House was our mental vacation destination. I dreamed of how awesome it would be to hang out there all day and get to see all the veejays, bands and celebrities that visited. Each video/commercial bumper, interview and musical performance was backdropped with wild décor and good times. It was right on the beach, had a killer pool with a slide that started on the roof, a giant Moon Man, a kitschy art collection, a fully functional kitchen, a spacious living room area and cool people were always stopping by. I assumed (wrongly) that the veejays actually lived there the whole time, like a super cool summer camp. I found out years later that each veejay was only there for 4 or 5 hours a day and they actually stayed at a nice hotel down the road, but at the time it was a fantastical delusion. The MTV Beach House first appeared in the summer of 1993 and was stationed in The Hamptons in Long Island, NY. It returned to the same spot, one house over, for the next summer and then popped up in different locales throughout the next few years. When high school and the ability to drive a car hit, my summers started filling up with friends, football practice and a job. This relegated my exposure to the Beach House to pretty much just late night airings of Alternative Nation and MTV Jams, but those first few Beach House summers were an all day affair. 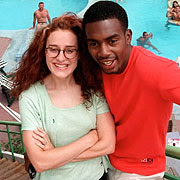 VJ/Shows: The first batch of veejays included John Norris, Bill Bellamy, Duff and my all-time favorite Beach House staple, Kennedy. Many others showed up over the following summers, including Dave Holmes, Dan Cortes, John Sencio, Carson Daly, Peter King, Daisy Fuentes, Skee-Lo and Ananda Lewis just to name a few. I seem to remember a lot of Pauly Shore in there as well. Many folks came through for varying lengths of time to just hang out, introduce videos and conduct super fun, laid back interviews. That’s one of the things that was pretty cool about it being a 24/7 thing was people didn’t sit down for just a rigid, 10-minute interview focused on a specific album or movie they were promoting. People would hang out through many segments and commercial breaks and just have fun and shoot the breeze with the veejays. It allowed you to see a side of the musician, movie star, comedian, etc. that you didn’t usually get to see. Many MTV shows moved to the Beach House for the summer as well including “Alternative Nation,” “MTV Jams,” “Top 20 Video Countdown,” “Singled Out,” “Say What? Karaoke,” “MTV Blocks” and “Most Wanted.” Of course, there were also some horrible shows like “The Grind” (or as Eric Nies liked to call it “Tha Griiiiiiiiiiiiiiiind”) but why dwell on the negative.

Musical Performances: Over the years many bands stopped by the MTV Beach House to play a song or two. Since alternative music was blowing up and the performances were usually set up around the pool area, it was quite an ironic contrast to see the bands wearing long sleeve t-shirts and Doc Martens against all the poolside pretty people. Nevertheless, I loved almost every band that came though, so I thoroughly enjoyed the songs, no matter how out of place they may have felt. My favorite performance from the first summer was probably 4 Non Blondes doing “What’s Up?” to a slightly unenthralled crowd. Linda Perry made the best of it though and I’ve always loved the performance for it. The next summer, Radiohead made one of their first live U.S. television appearances with a killer version of “Creep.” Lead singer Thom Yorke ended the song by diving headfirst into the pool and sinking to the bottom because of his combat boots. The story is that while struggling to get back out, he almost grabbed the live microphone, which could’ve electrocuted him on the spot. However, some producers were there to help him out and slap the mic away from his hand just in time. That same summer, Lisa Loeb did a cool nighttime performance of “Stay” that always reminded me of the late night beach scene from The Karate Kid. Another favorite of mine was No Doubt covering “Sailin’ On” by Bad Brains. Garbage, Nada Surf, Jewel and Everclear also turned in some really nice Beach House performances as well.

Here's a rebroadcast of Radiohead's "Creep" performance that unfortunately cuts off before Thom takes a dip: