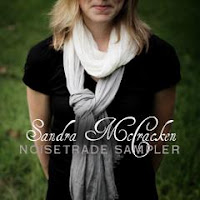 If by some unlucky chance you've never picked up any of Sandra McCracken’s music, you’ve finally run out of excuses. She’s posted an awesome 14-song sampler on Noisetrade that picks from her entire solo catalog and it’s only the price of an email address and a zip code (and hopefully a generous tip from you as well). That’s right, 14 incredible tracks from one of the most gifted singer-songwriters in the game at no cost to you. It’s a no lose situation and you’ll soon find yourself hunting down all of her albums. From her debut, The Crucible in 2000, to her most recent release, last year’s In Feast or Fallow, the Noisetrade Sampler covers each step along the way. One of the nice things is the early stuff sounds just as good and as textured as the new stuff. Whether she’s doing laid back piano ballads (“Sunday Morning,” “Portadown Station”), powerful hymns (“Jesus The Lord My Savior Is,” “Justice Will Roll Down”) or upbeat, alt-country (“Last Goodbye,” “Head Over Heel”), Sandra shows her many talents and writing voices as each song fits in perfectly with the next. The biggest draw for me on the Noisetrade Sampler is the unreleased, acoustic version of “In Feast or Fallow.” Sung as a beautifully sparse collective hymn, the already powerful lyrics seem to resonate even more. I hope we could all be lucky enough to find a community of people to share the weight of “whatever comes, we shall endure.” Recorded in her home studio with a few of her friends, Sandra did this song and a few others in an attempt to solidify the arrangements for group singing. I asked her about this version of “In Feast or Fallow” and here’s what she had to say:

“This song in particular, I have always imagined it this way, as an anthem of many voices, rather than just a solo. The album version hints at it with the guest vocals from Thad Cockrell and Derek Webb, but this one gives a fuller picture of it. Hopefully, it will show itself in time to be an authentic folk tune--for people to sing.”
"In Feast or Fallow" (Group Sing) - Sandra McCracken (Noisetrade Sampler)
Sandra’s Noisetrade Sampler can be downloaded below. You can also preview the tracks and leave a nice tip as well:
Posted by Will Hodge at 6:20 PM