“Ladies and gentlemen, rock and roll.”

With these immortal words, the cultural juggernaut known as MTV was launched on August 1, 1981 at 12:01 AM. Only a few thousand homes in New Jersey were privileged enough to get the initial cable broadcast, but that didn’t stop MTV from quickly growing into one of the most influential media entities of all time. Starting with a relatively small batch of promotional videos and concert clips, MTV would eventually change the way music was released and consumed. Sure, they were nowhere near the first ones to broadcast visual images synched with music, but they did it bigger, better and bolder than everyone else. From six Rod Stewart videos on the first day to the production of multi-million dollar videos like Michael Jackson’s “Scream,” Madonna’s “Express Yourself” and Guns N’ Roses’ “November Rain,” MTV revolutionized the concept of what a music video is and what it can do. No longer could a band or artist rely solely on the strength of their songs alone. Appearance, performance, visual creativity and the all important “music video” were now necessities if you wanted to grab anyone’s attention. Listeners became viewers, musicians became faces and the question of style or substance was answered in 3 and half minute cinematic commercials of sensory overload. MTV was selling more than music…and I, along with generations of others, couldn’t get enough of it. 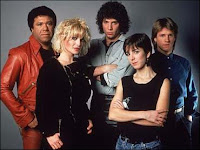 Being born in 1980, I didn’t get to fully engage in MTV’s first few years. Its impact and influence was not lost on me though. Whether it was due to my parents or my sister who is four years older than me tuning in, I still have very distinct memories of “the first five” veejays (Alan, J.J., Mark, Martha and Nina) and some of the real early videos like “Rapture” by Blondie, “Brass In Pocket” by The Pretenders, “I Ran” by Flock of Seagulls, “Our Lips Are Sealed” by The Go-Go’s and “Rock Me Amadeus” by Falco. All of the animated/stop-motion station ID bumpers and “I Want My MTV!” commercials are super vivid in my memory as well. However, the first time I really remember being completely enthralled on my own was Michael Jackson’s “Thriller” video. I have no idea when I first got Thriller on cassette or when I got the Making Michael Jackson’s Thriller VHS tape, but I wore them both out equally. Seeing such a “can’t look away,” scary-yet-enthralling video to go along with an album I couldn’t stop listening to made me a MTV fanatic. Hours and hours a day spent either watching MTV or having it on in the background while doing other things developed a habit I carried well into my late teens. Throughout the 80’s, I fell in love with tons of iconic videos like Prince’s “When Doves Cry,” Wall of Voodoo’s “Mexican Radio,” Run DMC’s “It’s Tricky,” The Clash’s “Rock The Casbah,” Beastie Boys’ “(You Gotta) Fight For Your Right (To Party),” and Fat Boy’s “The Twist,” just to name a few. I also became a huge fan of MTV’s original programming with Remote Control, Yo! MTV Raps and 120 Minutes becoming never miss shows for me. Martha Quinn, J.J. Jackson, Dave Kendall, Doctor Dre, Ed Lover, Fab 5 Freddy and Adam Curry all hold a special place in my musical heart for the incredible music they introduced me to.

As the 90’s crested the horizon, shows like Alternative Nation, MTV Unplugged and yes, even Beavis and Butthead joined my must see line-up and were more important television shows to me than anything on the major networks. Back then, even the first few seasons of The Real World were extremely eye-opening to me. There was so much incredible music available at the time and MTV could get it out faster and better than any radio station. More importantly, they could do it without any format constraints. For someone with a wide-swinging musical appetite, I really appreciated being able to see “In Bloom” by Nirvana, “Roots Radical” by Rancid, “Scenario” by A Tribe Called Quest, “Groove Is In The Heart” by Deee-Lite and “I Get Around” by Tupac, back to back to back. As I got older, practicing split kicks off the couch like David Lee Roth in Van Halen's "Jump" and trying to learn the dance moves from Michael Jackson's "Beat It" gave way to playing guitar along to Oasis' "Champagne Supernova" and furiously trying to scribble down the lyrics to Snoop Dogg's "What's My Name." Matt Pinfield became a trusted guru when he took over on 120 Minutes, Kennedy made me appreciate musical taste and sarcasm in a girl on Alternative Nation, Doctor Dre and Ed Lover continued to show me where great rap and hip-hop could be found on Yo! MTV Raps and 10,000 Maniacs, The Cure, LL Cool J, A Tribe Called Quest, Stone Temple Pilots, Mariah Carey and Nirvana all turned in jaw-dropping performances on MTV Unplugged. In fact, hugely important moments like Nirvana’s MTV Unplugged performance were the kind of things that made MTV so ground-breaking, so legendary and so wonderful. MTV provided continuous coverage of Live Aid when ABC was just showing highlights. MTV made awards shows watchable with unforgettable performances throughout the years by Madonna, Michael Jackson, Nirvana, an acoustic Bon Jovi, Red Hot Chili Peppers and a Neil Young/Pearl Jam pairing that blew my 13 year old mind. MTV came up with over-the-top contests with unbelievable prizes from artists like John Mellencamp, ZZ Top and Metallica. MTV stretched the creative, technological and artistic boundaries of what could be done in a video. MTV used its platform to bring awareness to social issues, health concerns, racial equality and community involvement. Unfortunately, those are not the kind of things you’ll find if you tune in to MTV today. They have traded videos and thought-provoking programs for unwatchable reality shows and weak awards ceremonies. They even removed the “Music Television” portion of their logo. But we still have the good times to look back on. All those times we watched MTV for the whole sleep over, stayed up late for a “World Premiere Video,” made an event out of the VMA’s, got our music news from Kurt Loder, started a conversation with “Man, you have GOT to see this new video,” wished we could’ve attended a Rock n’ Jock softball or basketball game or even just spent a blissful few hours getting transported and lost in some great videos; we’ve got MTV to thank for each one of those times. MTV is turning 30 and she’s looking a little rough around the edges, but we can’t forget what she did for us culturally or individually. So instead of bemoaning the newest episodes of Jersey Shore or Teen Mom, just start a conversation with someone about one of your memorable MTV moments, reminisce about your favorite veejay or debate what was the “best video” of all time. Just remember, eventhough it’s all subjective, a-ha’s “Take On Me” is still the trump card on that one. So turn those frowns upside down my fellow folks of the MTV Generation. While it’s true that nothing gold can stay, it doesn’t mean the glimmer has to fade once it’s gone.