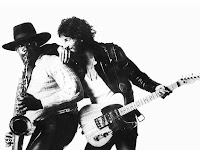 Although it’s been almost a month since we lost Clarence Clemons, it still hasn’t quite settled in with me. Part of my love for Bruce Springsteen’s music is the irreplaceable element of rock’s biggest Big Man. More than just the legendary saxophone solos and the larger-than-life stage persona, Clarence’s presence was a tangible and necessary ingredient for Bruce’s bombastic and soulful output. Listen to anything Bruce has released with Clarence and then anything he’s released without him and you’ll see exactly what I’m saying. I’m not using preference words like “better” or “greatest,” but there is an unmistakable thumbprint on everything they did together. The word “epic” has been grossly overused nowadays, but listen to “Jungleland” off of Born To Run and there’s no other word for it. While the almost ten minute long song is unashamedly grandiose from beginning to end, Clarence’s cinematic sax solo steals the entire thing. Even in his other works, my favorites being Bill & Ted’s Excellent Adventure, an episode of Diff’rent Strokes and Darlene Love’s “All Alone On Christmas,” his booming voice and tasty sax playing transcends everything else around him. It’d be foolish to think anyone could write anything that even remotely comes close to capturing Clarence’s impact, so I’ll just stick to honoring him with my undivided attention every time I hear that signature tone wailing and rocking. Bruce’s eulogy at Clarence’s funeral can be found in full HERE and this is my favorite line of the whole thing:

“Clarence doesn't leave the E Street Band when he dies. He leaves when we die.”