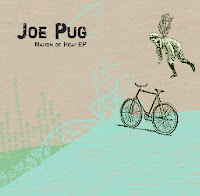 Recently, Noisetrade featured the Nation of Heat EP by singer-songwriter Joe Pug. Although I had seen Joe’s name pop up in various articles and conversations for awhile, this was the first time I intentionally gave him a listen. Man, have I been missing out. His folk balladry, insightful lyrics and weathered vocal delivery get him saddled with the “next Bob Dylan” thing a lot but I think he’s got more than enough going for him on his own merit. Sure, he plays a little harmonica and deftly uses the “all verse, no chorus” approach on a few of his songs but he’s definitely carving his own path. His songs sound so unbelievably authentic and transparent, like a conversation between friends set to guitar chords. But that’s where his deceptively simple magic comes in. Eventhough he’s using the same tools as every other musician with an acoustic guitar and a notebook, Joe ends up with something different, something unique, something better. Like a math tutor who can explain calculus in a way that makes it look like simple addition, Joe nonchalantly sings and strums like an everyday street-corner busker. But if you stop and listen, you’ll find stories of honesty, romance, heartbreak, struggle and opportunity conveyed in beautifully uncluttered melodies and brilliant lyrics. For example, in “Nobody’s Man” he’s able to sum up the intricacies of accepting adulthood with the refrain “I’d rather be nobody’s man than somebody’s child.” It’s one of those lines that hit so deep you have to wonder, “how has this line not been written before?” On the surface, “Call It What You Will” appears to be just a nice little folk song with a pay off line of “words are just words.” But Joe’s genius comes in his vocal delivery and in the way he sets it up with lyrics like:

“She said let’s call it quits, let’s not call it the end of the world

Call it what you will, I’m heartbroken still, words are just words”

“I hear a blue heron crying, some folks just call it a bird

Call it what you will, I’m heartbroken still, words are just words”

Writing direct truth and real emotion with no fluff or pretense is not as easy as he makes it look. Another great example from another EP of his, In The Meantime, is "A Thousand Men." Here’s the first verse and chorus:

“See Thomas Jefferson on the eve of bunker hill
Writing words to die for, writing sentences to kill
They've come to paint his portrait so he grabs a chair and sits
As the surgeon orders cotton for a thousand tourniquets”

"A Thousand Men" - Joe Pug (In The Meantime EP)

Joe’s unique slant even stretches beyond his songwriting prowess into how he gets his music out. Joining up with Noisterade for the Nation of Heat EP download was just another step in the free digital music direction he has been going in for awhile. On his website, joepugmusic.com, you can also download his 5-song In The Meantime EP and 2 songs from his first full length album, Messenger. If you missed out on the Noisetrade download, you can also pick up 2 songs from his Nation of Heat EP as well. While I highly recommend sampling all of his free offerings, don’t let his generosity keep you from buying his physical releases so that he can continue doing what he does so well. He’s got Messenger and Nation of Heat available in cd and vinyl formats, as well as some t-shirts and bundle deals in his webstore HERE. How could you pass up Nation of Heat on swanky green 10” vinyl?