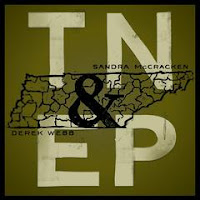 From their backyard to our ears, Derek Webb and Sandra McCracken have once again combined their unique talents to deliver another stellar joint album, TN EP. This 7-song EP is beautifully constructed and does a great job of blending together Derek and Sandra’s voices, songwriting styles and musical strengths. Sometimes when two strong singer-songwriters collaborate, the results feel like patchwork that just happens to share a common piece of thread. Lucky for us though, that’s not the case here. The cohesion found on TN EP is more akin to a chemical reaction where the ingredients transform into something completely new and inseparable. Each track is built on a foundation of solid songwriting and is complemented by a variety of organic and non-organic musical elements. Melodically lush and layered, each song unfolds with an inviting ebb and flow that draws you in to the story that is being told. Even at its most ornamental moments, the heart of each song is never obscured or buried in favor of production tricks. Each synthesized sound and computerized beat enhances and expands the songs to create an experience that is more than just a collection of songs.

Within five original songs and two covers, TN EP covers a lot of ground. “From You To Me” is a gorgeous relationship song that tells a little of Derek and Sandra’s story, while still leaving room for you to include your own. I absolutely love the lyric, “God makes a tabernacle from a rock, a rib and our two crooked frames.” There’s also some really tasty electric guitar parts going on in the background of this one. “Last Fool Standing” plays out like the flipside of “From You To Me” with melancholy lines like “Sometimes love doesn’t feel like it should” and “There’s one way to be safe from this mess, lock your heart like a stone in your chest.” Again, mesmerizing electric guitar lines on this one too. The rootsy swing of “We Will Never Have Tonight Again” showcases Sandra’s voice really well and it completely nails the sweet spot that’s created when the two of them play and sing together. “Etching” is probably the most expansive track on the album, both lyrically and musically. Vocal loops, synth lines and distorted percussion swirl around lyrics that tell of the impact a father’s words have on his children. Derek’s caution is clear, “Daddy you’re making an etching that you can’t erase.” The lyrical weight, musical vibe and charmingly eerie bridge quickly made this song my favorite on the album. “Tennessee” closes the album with some brilliant piano-guitar interplay and some Arcade Fire-esque musical sections. Not to be outdone, the two covers they do are pretty amazing as well. Cyndi Lauper’s “Time After Time” pulses along beautifully and Simon and Garfunkel’s “The Sound of Silence” captures the haunting feel of the lyrics even better than the original does. I’ve heard many, many artists have a go at these songs with varying degrees of success and Derek and Sandra’s versions stand out for their reverence and distinctiveness. Rarely does an album provide such lyrical and musical substance and hold up to repeated listens as well as TN EP does. Throughout the album, Derek and Sandra’s collective songwriting gifts are as impressive as the sonic textures they create. TN EP has enough seed for your heart and sound for your ears to offer something new each time you spin it. Which, believe me, will be over and over again with highly rewarding results.

TN EP will be released independently on June 28th. You can download "From You To Me" from Noisetrade below: