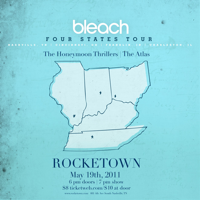 If there's ever an unsettling reminder of how quickly time passes, it’s when one of your favorite bands has been away long enough to actually “reunite.” Bleach first hit the scene in the mid-90’s and they were one of the Christian alternative bands that was good enough to have made it in the mainstream market had they gone that route. They were a huge part of my high school years and I’ve seen them quite a few times in concert. Their (not exactly) final show in August of 2004 with The Lonely Hearts, Seven Day Jesus, The O.C. Supertones and Relient K was absolutely one of the best shows I’ve ever been to. So when there started being a buzz last year that Bleach was getting back together, I was understandably stoked. A few festivals shows last summer and news of recording sessions fed my anticipation even more. When their recent “mini-tour” was announced with a Nashville show, there was no doubt I was going to be there to welcome the boys back. Since they’re currently writing and recording new songs, I wasn’t really worried about this just being a nostalgic show with them half-heartedly running through some old tunes. Thankfully, I was right as they turned in the type of cranked up, high-energy, memorable show I’ve come to love and expect from them.

Opening up with a killer one-two punch of “December” and “Baseline,” Bleach quickly crushed any questions of whether they could still deliver their amped up, melodic brand of alterna-punk with the same heart and gusto. The chorus of “December,” “Hey, hey, it was so great to see you, the winter months had taken their toll,” felt quite appropriate for their return after so much time away. After a couple more upbeat songs, they transitioned nicely with one of my favorites, “Sun Stands Still.” While I tried not to go into the show with any expectations for my favorites, I was sincerely thrilled when they launched into this one. The crowd had already been singing along with every word, but they erupted on “Sun Stands Still.” After such a connecting moment, they played a new song for us called “Daughters and Sons.” It was a cool, mellow acoustic song and they invited Josiah Holland (The Honeymoon Thrillers, The Lonely Hearts, Holland) to play accordion on it. They continued throughout the night with their unique mix of worshipful and relational songs and each one was met with an enthusiastic response from the fully engaged crowd. During songs like “Knocked Out” and “Sufficient,” it was as if Bleach had turned Rocketown into an all-out church service. Before their last song, they joked about already playing every song they had rehearsed, making sure we knew why there would be no encore. They closed the show with a huge sing-a-long version of “Get Up” and the crowd’s appreciative response was thunderous. Throughout the show, their on-stage banter was sprinkled with jokes about getting old, having a daycare on the side of the stage and shaking the rust off; but their passion and energy seemed explosive and limitless. With more recording sessions for the new album scheduled and hopes of another tour following its release, it’s super nice to have the guys (including original-drummer-now-guitarist Matt Gingerich) back making great music. Especially since they’ve shown they’ve definitely still got the Bleach goods! 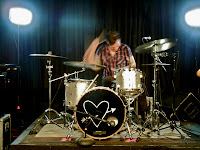 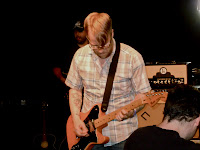 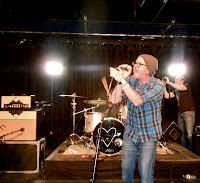 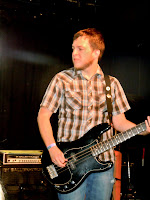 “Weak At The Knees”

You can find out more about what Bleach is up to at www.bleachisalive.com

Here's a great video of "December" from the show courtesy of Matt Giesler: