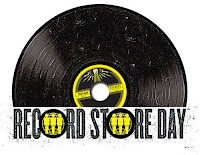 What are YOU doing April 16th? It's close to being time for Record Store Day again and the smell of limited edition vinyl is in the air. I chronicled my struggles and ultimate victory from last year's Record Store Day on here and I'm already making plans for this year. The list for RSD 2011 (which can be found HERE) came out last week and there are some really great looking pieces of wax again this year. Never to be outdone though, Third Man Records announced their Record Store Day offerings today and they look really incredible! Here’s the run down of their 4 special releases that they will be offering:

The White Stripes – “Let’s Shake Hands/Look Me Over Closely” (TMR-088)
This is a reissue of the very first single The White Stripes ever put out all the way back in 1998. It will be on red/black swirled vinyl.

The White Stripes – “Lafayette Blues/Sugar Never Tasted So Good” (TMR-089)
This is a reissue of the second single The White Stripes released, also in 1998. It will be on white/black swirled vinyl.

Karen Elson – “Vicious/In Trouble With the Lord” (TMR-090)
The A side of this single has Karen covering Lou Reed (“Vicious” from his second solo album) and the B side is an outtake from her debut album, The Ghost Who Walks. It will be limited to 1000 copies on clear vinyl with peach rose petals embedded in the wax. Can’t wait to see this one in person!

ROME – “Two Against One/Black” (TMR-093)
Officially the single will be attributed to “Danger Mouse & Daniel Luppi present ROME starring Jack White and Norah Jones” but now that we’ve finally got some evidence of a release from this semi-secretive project, they can call it whatever they want. The A side features Jack White and the B side will be Norah Jones. ‘nuff said.


I’m sure TMR has even more tricks up their sleeve yet to be announced, as last year they had a raffle for one of the go-carts from The Raconteurs’ “Steady As She Goes” video and a live performance from Brendan Benson and Patrick Keeler as “The Racontwoers.” Who knows what festivities there are in store for this year, but this list is certainly incredibel news!
Posted by Will Hodge at 4:44 PM