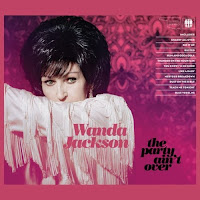 The average age of retirement in the United States is reported to be 62 years old, but don’t tell that to Wanda Jackson. The Queen of Rockabilly released her first single in 1954 and since then she’s put out 30+ studio albums and 70+ singles, toured the world, dated Elvis, carved out a path for female musicians and put her own unique stamp on rockabilly, country, gospel and rock and roll history. Thanks to Jack White and Third Man Records, she’s currently getting a well-deserved career renaissance with a new generation of fans for her latest album, The Party Ain’t Over. Throughout her career, Wanda has always had an electric sass and a powerful energy that cuts through her songs and dares the music to try and keep up. Even at 73 years young, she commands a performance and taps into the primal spirit of rock music like few can. As producer, arranger and lead guitarist of The Party Ain’t Over, Jack proves to be a formidable foil to Wanda’s pure rock and roll gusto. While he does an excellent job creating a musical backdrop that compliments Wanda perfectly, she absolutely steals the show with her sometimes sweet, sometimes growl, but always rowdy, vocals and her fun attitude.

In the month’s leading up to the release of The Party Ain’t Over, Wanda piqued everyone’s interest by releasing two 7” singles from it. First was a cover of Amy Winehouse’s “You Know I’m No Good” backed with “Shakin’ All Over” in January of last year. In November, she put out a cover of Bob Dylan’s “Thunder On The Mountain” with “Dust On The Bible” as the B-side. As awesome as it was to have these four songs to spin, Wanda’s raucous and reckless appeal is best enjoyed in a song after song, complete album onslaught and The Party Ain’t Over doesn’t disappoint. Not only does her voice sound full and amazing on each track, the vintage rock ingredients of electric guitar, bass, drums and piano are perfectly balanced between solid and loose feels, the horn section cuts in at the right time, the pedal steel is flavored in nicely and Jack White’s guitar work is downright ferocious. The selection of cover songs is spot on as well. Not only does she transform the Dylan and Winehouse ones from the singles, she also takes a swing at Harlan Howard’s “Busted” (famously done by Johnny Cash), “Rum and Coca-Cola” (usually associated with The Andrews Sisters) and Jimmie Rodgers’ “Blue Yodel #6.” She doesn’t try to take them into any unfamiliar territories, but she absolutely makes each performance her own. She’s surrounded by an incredible cast of contributing musicians including Jack Lawrence (The Greenhornes, The Raconteurs, The Dead Weather) on bass, Patrick Keeler (The Greenhornes, The Raconteurs) on drums, Carl Broemel (My Morning Jacket) on pedal steel, Olivia Jean (The Black Belles) on guitar and bass and “The Cherry Sisters” (Karen Elson and Ashley Monroe) on background vocals. While The Party Ain’t Over is steeped in 1950’s rock sensibilities, it absolutely sounds fresh and modern due to Wanda’s enthusiasm and the explosive performances of the musicians. The party is definitely not over for Wanda Jackson and thankfully she shows no signs of sending anyone home anytime soon.

"Dust On The Bible" - Wanda Jackson (The Party Ain't Over)

The Party Ain’t Over can be purchased directly from Third Man Records HERE and like with all of their vinyl releases, there’s a nice color variant. Randomly inserted into 100 mail orders will be a limited edition fuschia colored record.

Here's a killer video for "Thunder On The Mountain" shot here in Nashville at United Record Pressing: