Dala - Everyone Is Someone (Album Review) 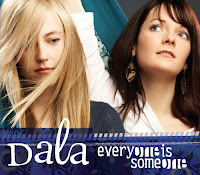 Canadian pop-folk duo Dala has been building quite the fan base in The Great White North and now they’ve got their eyes set on the United States. Their latest album, Everyone Is Someone, was originally released in Canada in 2009 and it’s getting a push here now as well. Amanda Walther and Sheila Carabine sing like sisters who have that innate ability to know what the other is doing and where they’re going. Whether it’s beautiful harmonies, full on duets or subtle background additions, both girls definitely create the heart of what Dala is when they are singing together. Just like with the Indigo Girls, you can hear the distinction in both voices while they weave them together to form an entirely new one. Their acoustic and piano led songs have a heart-sleeved intimacy that makes you feel like you’ve stumbled upon a diary or accidentally overheard a conversation between friends.

It’s no secret that whenever you’re heartbroken, there’s some part of you that needs to wallow in the sadness a little bit. On Everyone Is Someone, Dala offers quite a few musical options to accompany those moments. Songs like “Lonely Girl,” “Crushed,” “Horses,” “Younger” and “Stand In Awe” all have a tender rawness to the lyrics and a somber musical bed that tugs at the heart whether you can relate to the experience or not. Like any good musicians though, Dala compliments those musical shoulders to cry on with some bouncy pick-you-ups too. “Alive,” “Northern Lights” and both version of “Levi Blues” pop through in the tracklist like sunlight stretching through clouds. Although I may not personally connect to all of the lyrical subjects, the honesty in their approach will allow them to impact those who can. Everyone Is Someone is a melodic, nicely balanced, acoustic pop record and I can see Dala doing very well here.