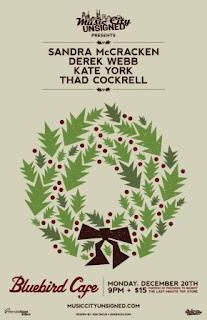 Last night The Bluebird Cafe was transformed into a living room, a confessional, a church and a mission through story, song and action. Music City Unsigned presented an intimate concert in the round featuring Sandra McCracken, Derek Webb, Kate York and Thad Cockrell, with a portion of the ticket sales going to The Last Minute Toy Store. The Bluebird Cafe is known for being a quiet space where songwriters are really listened to and there seriously couldn’t be four artists more deserving of the consideration and attention. All four were intent on sharing more than just their songs with us, as they also shared stories, laughs and multiple mentions of the meaningful work of The Last Minute Toy Store. Derek Webb opened the evening with a greeting, some nice words about both organizations that were associated with the show and some introductions to his fellow artists. For the next couple of hours, Sandra, Derek, Kate and Thad bared their hearts through their honest songwriting, gorgeous singing and talented musicianship. Lyric after lyric and melody after melody floated throughout the room and inconspicuously set up residence in each heart and mind. This was not only my own experience, but a collective acceptance that was evidenced by the growing smiles and the leaning in closer of each patron with each passing round of songs. It never ceases to amaze me how much beauty and truth can be conveyed through a chunk of wood, steel strings and the spoken word. But in the right hands, these common ingredients take on extraordinary powers to touch, move, inspire and refresh our very souls. Last night was four voices, four guitars, countless goosebumps and infinite smiles.

While the rhythm of a show in the round makes perfect logical sense, the overall feel of the show can be as sprawling and diverse as each artist wants it to be as each one becomes a train conductor on their turn. They are able to try out brand new stuff, build off the previous song, travel in a completely opposite direction or call any audible they want. The audience is a willing passenger and last night each song choice paid off in spades and the results were mesmerizing and memorable. At the risk of trying to describe a wave by its individual water drops, here’s a rundown of each artist’s pick:

Derek Webb started things off with “The End/The Very End” from The Ringing Bell. The acoustic version brilliantly showcased his analogous lyrics and Beatlesque chord structures. “You are the anti-curse, death going in reverse” is the kind of lyric that a place like The Bluebird Cafe was built for. Throughout the night he also played a pulsing “A New Law,” his folk/doo-wop ode to Fred Phelps, “Freddie Please,” a stripped down “I Love/Hate You,” one of my personal favorites “Lover” and a great version of “Love Is Not Against The Law” that sounded excellent in it’s acoustic form.

Kate York was up next and out of the four, I was the least familiar with her work. I knew her name from a cover of her song “Eternal Gifts” by Leigh Nash, but other than that I had only seen her name in various places. Man, am I glad our paths finally crossed. What a spirit and what a voice! Kate’s soft-spoken spunk was a nice contrast to her pure, uncluttered playing. While I don’t know all of her song titles, some of her standouts were the achingly beautiful “Go” and “Rains Here Too,” a song called “Harley Sunday” that included a nice whistling solo, a hymn about forgiveness from her highly anticipated (by this guy at least) “in progress” hymns record and to seal the endearment for me, a humbly appropriate “Eternal Gifts.” Her first song was great too but I unfortunately didn’t catch the name of it. Kate could also be heard singing along on most of Thad’s songs as well. I love melancholy folk songs and she can sing them as good as anyone. I was so glad to finally catch her live and to be introduced to her music.

Thad Cockrell held the third slot and his high, plaintive voice had everyone holding their breath to keep from missing a note. I’ve seen Thad live a handful of times now and he has absolutely floored me each time. Thad started out with a great version of “Rosalyn” and had us all in the palm of his hand from there on out. I can’t really begin to describe the feeling in the room for his next song. It was a new song with the refrain of “Hallelujah, the King’s on the throne” and words like beautiful, sacred and reverent don’t come close to capturing it. If God ever wrote a song to Himself, it’d be this one for sure. Kate York echoed many of our sentiments as she jokingly thanked Thad for the first tear of the night. Thad also played excellent versions of “Never Told You,” “Safety,” “Beauty Has A Name” and closed with a stirring “Great Rejoicing” that turned into all out singalong with every voice in the place joining in. Thad has one of the greatest, most inviting voices I’ve ever heard and his ability to write honest, thoughtful lyrics is both inspiring and maddening.

Sandra McCracken closed each round out and with every song she showed she was up for the task. Derek joined in nicely on vocals and occasional guitar, adding a warm element to hear authentically peaceful songs. Her first two songs, “Can’t Help Myself” and “New Wonders,” were hymns from her latest album, In Feast Or Fallow. After those, Sandra and Derek did nice low-key version of “Chattanooga,” one of my favorites off of Gravity Love and “Lock and Key” from Red Balloon. Before playing her Advent hymn, “This Is The Christ,” Sandra took a moment to joke of her “co-write” with Martin Luther and plug the Music City Unsigned Family Christmas album. She closed the last round, and the night, with a wonderfully reverent “Silent Night.” All four singers and eventually everyone in The Bluebird Cafe, including the bartender, joined in to cap the night as a poignantly unified chorus.

More than music, more than a cool night out, more than tossing a few bucks to those in need, the concert turned into something greater than the sum of it’s parts, which isn’t easy to do considering the level of talent and heart conveyed in all of the folks involved. Great talent and impressive songwriting are easy to spot, but character, heart and spirit aren’t usually as forthcoming. Thank you to Sandra, Derek, Kate, Thad, and everyone at The Bluebird Cafe, The Last Chance Toy Store and Music City Unsigned for an encouraging display of goodwill and an unforgettable night of music.