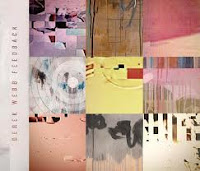 Ever the musical shapeshifter, Derek Webb has once again expanded his musical boundaries and redefined his artistic expectations to produce Feedback, arguably his most ambitious and most creative project to date. While the description of “an instrumental electronic album based on The Lord’s Prayer” is an efficient introduction, the scope and impact of Feedback can hardly be summed up in a tagline. Sprawling, mysterious, weighty and layered, Derek uses organic and non-organic musical elements, along with accompanying abstract pictures and paintings, to express one of the most powerful and intimate moments of the Christian faith. In the Bible, Jesus used the Lord’s Prayer as an example of how to communicate with God in an authentic, unpretentious way. Attempting to musically translate that idea, without the benefit of lyrics, is no small undertaking. But Derek has shown time and time again that he’s not interested in the easy sell, the road well travelled or the instantly digestable. He’s fine with you not liking the first bite because he knows what’ll happen if you’ll trust him enough to take another. I can say this with confidence because this has been my personal experience with Feedback. Derek’s been in my personal “top tier artists” for 15 years or so now and what first hooked me so deeply were his unique lyrics and his passionate vocal delivery, neither of which is present on Feedback. Also, on a preference level, I’m not a super huge fan of electronic music, except for a few bands here and there. These ingredients caused me to approach Feedback with a bit of caution. My mistake. I should know by now that any path Derek chooses to explore is worthy of at least few following steps from me. He hasn’t disappointed me yet and Feedback is no exception to that.

With Derek’s rich catalog of songs, there’s a pretty good chance that none of the selections on Feedback will rank in your “top five Derek songs” by themselves. However, Feedback may easily become one of your “top five Derek albums” when looked at as a whole package. In fact, that’s probably how Derek wants Feedback to be viewed, as collective pieces (including the pictures and paintings) to be experienced in full. The nine song tracklisting is laid out in three movements with the song titles corresponding to the lines of The Lord’s Prayer. Just like The Lord’s Prayer would sound disjointed if you put the sentences in a different order, Feedback would lose its cohesion and intended rhythm if you put the album on shuffle. Listened to in sequential order, from “Our Father In Heaven” to “Amen,” Feedback unfolds as a musical landscape with which you can encounter your day, your self and your Creator. Make no mistake, it’s not intended to just be a backdrop while you are doing something else. It’s more of a canvas on which to create and enhance whatever you are currently involved in at the time. Feedback is perfect for a drive, a conversation, quiet moments, parties, being alone with your thoughts or hanging out with a group of people. Derek has managed to combat the main complaints of electronic music (artificial, plastic, cold, soulless, etc.) with enough creativity, emotion and live instrumentation to construct an electronic album with a beating heart. At the end of the day though, Feedback’s impact on you is going to be decided by how you interact with it. Just want some good, ambient background music? Derek’s production skills and sense of melody are on par with anything else out there. Want something more than that? Well, Derek has handed us all a toolbox in Feedback. What we do with it is up to us.

Feedback can be purchased in three different packages directly from Derek's website HERE.