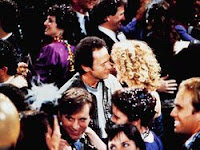 What a minute, you say! Isn’t “Auld Lang Syne” a New Year’s song? Technically, yes but it’s no secret that New Year’s songs always get lumped in with Christmas songs. This one even shows up in Elf. But Scottish poet Robert Burns’ ode to fondly looking back perfectly fits the New Year’s ideals of remembering the past and hoping for the future. Every New Year’s Eve party, television countdown special, gigantic inanimate object drop, and movie scene that takes place on December 31st uses “Auld Lang Syne” to immediately transport us to that place. Don’t believe me? Cue up the New Year’s scene from When Harry Met Sally and tell me it doesn’t get you. It usually only takes the first note or two to be swept up in the grandiose moment of one year giving way to the next. There’s probably a version for every imaginable genre, but here’s my two refined and rowdy favorites:

“Auld Lang Syne” – Guy Lombardo: For the nostalgic, romantic, 1930’s Big Band sound, Guy Lombardo is golden. The first minute is perfectly instrumental and begs to be danced to. Once the voices come in, the vintage feel is solidified and makes you wish for a few more verses. This is the version for your “just the two of us” New Year’s Eve party or for the family gathering where your grandparents have a few more years to look back on than everyone else.


“Auld Lang Syne” – MxPx: However, if you’re headed to a friends’ party and want to have a really good time, MxPx has you covered. Loud, raucous, and as celebratory as they come, this is my idea of ringing in the new year. A word of caution though, this version could cause something in the house to get smashed. So hide your breakables, kiss your sweetheart at midnight and sing a long!
"Auld Lang Syne" - MxPx